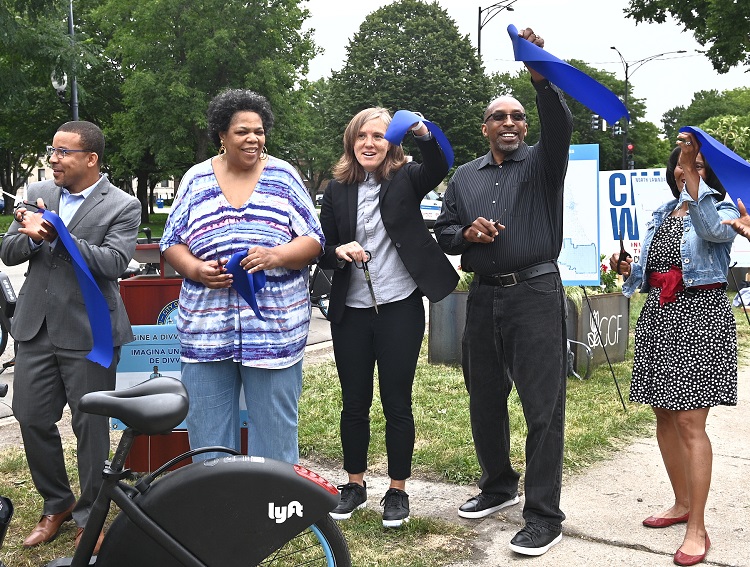 CHICAGO – On behalf of Mayor Lori E. Lightfoot, Chicago Department of Transportation (CDOT) Commissioner Gia Biagi and the City’s bikeshare operator Lyft today joined 24th Ward Alderman Michael Scott Jr. in North Lawndale to launch the next phase in the expansion of Divvy. The event highlighted the introduction of 3,500 new e-bikes and investments in new bikeways to serve the Divvy expansion area funded through Mayor Lightfoot’s Chicago Works infrastructure plan. It also included a ribbon-cutting for the first of 107 new lightweight e-stations that will be installed in a 35-square mile area of the Southwest and Northwest Sides of the City. The new station style is designed to accommodate Divvy’s state-of-the-art e-bikes, which were introduced last year.

“Divvy has already become the largest bikeshare system in North America and thanks to this 2021 expansion, we will be able to build on this reputation by making it bigger and better than ever before,” said Mayor Lightfoot. “I am thrilled to expand this impressive system to even more parts of our city as well as double down on our efforts to make biking safer and easier through our capital funding plan, Chicago Works.”

Mayor Lightfoot’s Chicago Works allocates dedicated funding for pedestrian, biking, and transit investments, including $17 million for new bikeways that are being installed in 2021 and 2022.

“With our Divvy bikeshare system coming off a monthly ridership record in June, we are excited to get this next phase of the Citywide expansion underway,” Commissioner Biagi said. “It’s taken months of planning and community engagement to get to this point, but we are pleased that we can now start installing stations and bringing bikeshare to new neighborhoods in Chicago, on our way to full Citywide Divvy service in 2022.”

Divvy has never been more popular and set a monthly record of with 699,720 rides in the month of June. Divvy recently recorded its highest ridership day on June 5 with 36,347 rides, breaking the record for daily trips for the second time in less than a year. Since its launch in 2013, Divvy has provided more than 26 million rides, helping make Chicago healthier, greener and more bike-friendly.

CDOT has been working closely with stakeholders to plan local station networks as well as identifying 45 miles of new bikeways that will be installed this year and next in the Belmont Cragin, Austin, and North Lawndale communities. The planned bike network will complement the Divvy expansion and strengthen transportation connections within and between neighborhoods that will be served this year.

CDOT partnered with community stakeholders to identify key destinations and develop a plan for implementing an on-street network of bikeways beginning this year. The effort will also include the installation of up to 100 bike racks in each of the three communities. The Chicago Works capital infrastructure plan is the primary funding source for the 50 miles of bikeways that CDOT is working toward installing citywide this year.

In order to identify new Divvy station locations, CDOT and Lyft are taking a multi-pronged outreach approach that includes community-based planning rides, online forums and surveys, youth-led feedback sessions, yard signs and old-fashioned door knocking. More than 75 planning specific touchpoints and working sessions have been conducted in 2021 so far, with the process ongoing in the expansion areas.

With the addition of new neighborhoods in the coming months, Divvy will cover 190 square miles in Chicago, building on its status as the largest bikeshare system in North America. Divvy was launched in 2013 and recently celebrated its eighth birthday. The system played a key role last year during the pandemic, offering free rides to healthcare workers and also providing the public a socially distanced transportation option.

“We are thrilled that CDOT has chosen North Lawndale to launch the next round of Divvy’s expansion,” Alderman Scott said. “With the addition of a new connected bike network, this gives residents more transportation options and makes it easier for people to run errands, connect to transit, get to jobs and lead a healthy lifestyle.”

In a key change, CDOT and its partner Lyft, that manages Divvy operations, will be serving the new neighborhoods exclusively with e-bikes which have the advantage of lock-to capability, meaning Divvy users can lock them with a built-in cable-lock to a regular bike rack, signpost, or any other legal bike parking spot. This gives riders more flexibility and options when biking around the city and ending a ride. A trip on a classic Divvy bike can only be ended at a traditional Divvy bike share station. As always, riders are encouraged to plan their trips ahead using the Divvy app or DivvyBikes.com/map.

The new service areas will be equipped only with Lyft’s lightweight e-stations featuring rubber mats made with 25% Nike Grind rubber from Nike’s footwear manufacturing scraps in the top layer, and 100% recycled tires in the bottom layer. The stations embrace the concept of circular economy by repurposing shoe scrap manufacturing waste and recycled tires.

E-bikes use pedal-assist technology to boost riders’ pedal power, making it easier for people of all riding abilities to ride and help people make longer trips with ease. Divvy first introduced e-bikes in 2020. The addition of 3,500 new e-bikes will double the total deployed to 7,000.

Following are the community areas that will be served in this year’s Divvy expansion:

An additional 48 new e-stations are also being planned within the existing service area near the expansion zone. These stations will help increase reliability and predictability for riders through increased density of stations, meaning shorter walks to a bike and enough parking to accommodate increased demand from the larger station network.

Under the Divvy Citywide expansion, Lyft is making a $50 million investment in new bikes, stations and hardware and is also providing the city with an additional $77 million in direct revenue for transportation improvements over a nine-year period.

“Bike ridership is booming in Chicago and we’re building on this momentum by working with our partners in City Hall and CDOT to expand Divvy into communities in the Southwest and Northwest parts of the city,” said Caroline Samponaro, Head of Micromobility & Transit at Lyft. “E-bikes are fast, reliable and affordable, making them an increasingly important part of Chicago’s transportation system as we seek to reduce traffic congestion and carbon emissions coming out of the pandemic.”

When Divvy completes its full expansion, it will include 16,500 bikes and more than 800 stations. The growth of the system is estimated to create over 200 additional jobs at Divvy in Chicago.

For more information, go to https://www.divvybikes.com/.

Read More:CDOT and Lyft Join Alderman Michael Scott to Kick Off Next Phase of Divvy’s Citywide