The conceptual illustration presented to the council Thursday night is a part of the larger Recreation and Parks Open Space (RPOS) Master Plan. That plan will be presented to the Mountlake Terrace Planning Commission and then the city council later this fall – with final approval scheduled in early 2022. The Veterans Memorial Park Master Plan is included as a chapter within the RPOS.

However, city staff is requesting that the council adopt a resolution confirming the Veterans Memorial Park conceptual illustration at its Oct. 18 regular business meeting in order to meet a planning schedule associated with grant funding for the park.

The city conducted a series of surveys and held community stakeholder group meetings to solicit input for Veterans Memorial Park and the RPOS. After collecting public feedback, three plan options were developed for the park. People were asked during an online open house which concept they liked best and what improvements they considered to be most important.

The third option proposed was the most popular among those who responded. Of the choices presented, it involves the greatest amount of development, which includes a greater looping main pathway and upgraded lit trails, selective tree thinning, the removal of invasive species, a new larger playground, larger restroom facility and a new shelter.

“This was the most voted on, most liked, most wanted planned concept out of the three,” said Recreation and Parks Director Jeff Betz.

It features paved and lit primary connector trails built to accessibility standards that will link the Mountlake Terrace Transit Center with the Civic Campus, at 58th and 60th Avenues West. The main trail crosses a footbridge with an interpretive sign. A gravel connector trail and narrower secondary trails with native soil surfaces also wind through the park and connect with the primary trails.

Under this proposal, all park entrances will have wayfinding signs. Along 58th Avenue West, the park will feature a new nature-themed play area, a new picnic shelter, a two-stall restroom, an improved veterans memorial with seating, and various frontage improvements including a widened sidewalk and planting strip with street trees.

The preferred plan recommends developing a vegetation management plan for removing invasive species throughout the park and replacing them with more native plants. It would also include conducting a detailed tree survey that can help guide selective tree thinning and impact forest health.

It calls for the interface between surrounding buildings and the park’s edges to be designed using Crime Prevention Through Environmental Design (CPTED) principles. The resulting areas are meant to have an open, welcoming feel and should not locate parking, utility or maintenance facilities facing park.

Another recommendation is that direct pedestrian access between the park and adjacent private properties supported by private property owners should also be integrated into the park’s trail system to the greatest extent possible.

Recreation and Parks Director Betz said the project’s development and restoration work is currently projected to cost approximately $4.8 million. “We have to remember this is still a 30,000-foot view as far as we don’t know all the pathways’ locations and things like that,” he added, noting that survey data hasn’t been conducted yet. “It really is just a conceptual estimate,” with a significant amount of money included for design, administration and contingency costs, Betz said, adding “it’s really hard for me to say until we really get into that process.”

He also advised the council that those estimated costs are in 2021 dollars. “So depending on when it happens, if it takes 10 years to do some of these things obviously those costs will increase,” Betz said.

During previous discussions, Betz told the council that Mountlake Terrace had already secured a significant portion of that amount in grants. Betz roughly estimated, at that time, the city would have to pay for approximately $1.5 million of the total cost if it wasn’t able to secure any additional outside funding sources. 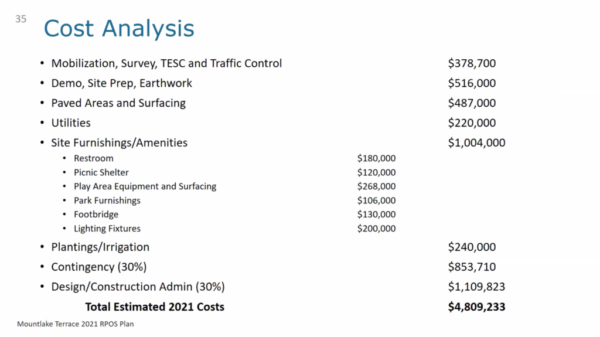 Councilmembers generally expressed their support for the concept and several said they were excited to be moving forward with it. Some highlighted specific areas they felt were particularly important in the concept such as vegetation management and how the park interfaces with the surrounding buildings and development along its edges.

City staff previously presented the conceptual plan to the Mountlake Terrace Recreation and Parks Advisory Commission (RPAC) and the Planning Commission. Both recommended its approval. The city council recently toured Veterans Memorial Park in preparation for Thursday’s review of the resolution to confirm the preferred plan’s conceptual illustration.

At the conclusion of Thursday’s presentation, Betz also told the council that due to the number of projects “queued up,” he felt it will “become more and more difficult,” with numerous other projects on the horizon, for himself and Parks Superintendent Ken Courtmanch to continue carrying out all of the related efforts without some assistance.

“Parks really does not have somebody that’s available to do project management or construction management type things,” he said. “I think it’s going to be important that the council consider in the future that we start looking at a park project manager – even if it’s a limited term. If council wants to continue to go down this path and revamp some of the park infrastructure then it’s going to be important” the department has adequate staff to do so, he said.

Betz also said it’s important for the city to consider adding more maintenance staff as parks are revamped and more planting strips are added throughout the city.

Councilmembers were mostly supportive of exploring the idea in future discussions, with some adding that it was important to understand the needs of staff moving forward, especially as more facilities and parks are activated and/or restored.

The council also reviewed proposed Recreation and Parks fee adjustments for 2022-2026. Fees are set by resolution in a five-year schedule. They are analyzed each year to ensure the following year’s fees align with current market conditions and continue to reflect the city’s financial goals and policies. That review process also considers the current economic conditions, program demands, costs and competition in the area, along with anticipating the potential impacts of fee adjustments.

Recreation programs including aquatics, youth and athletic/fitness are currently expected to recover 74% of their budgeted costs for this year. Betz said that’s quite a bit lower than what is normally budgeted for, but “since we did this budget during the pandemic we knew that we were going to take a significant hit.” 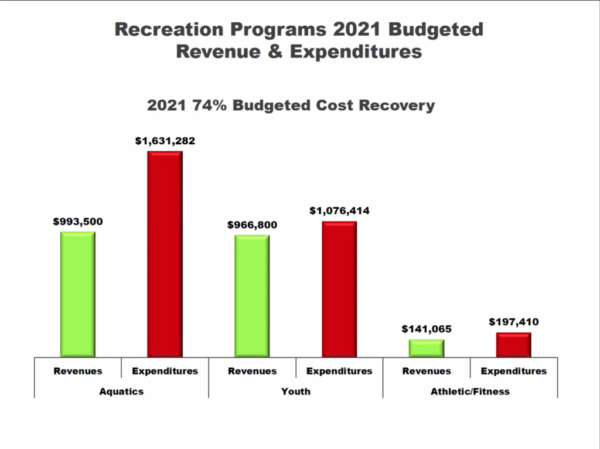 He noted that most programs that were previously shutdown during the pandemic have returned, but “we’ve really had to start over with almost all of our programming.”

Following the latest review, several of the department’s program fees previously identified to increase in 2022 are now being recommended to remain at their current levels. However, some fees that weren’t scheduled to change will be increased based on market comparisons.