In ongoing work to update the city’s Parks, Recreation and Open Space (PROS) plan, Edmonds parks officials and consultants hosted a virtual meeting Saturday to gather additional ideas from residents on their priorities for Edmonds parks system and recreation programs.

The six-year PROS plan is aimed at managing and enhancing Edmonds’ parks, open space, trails and recreation opportunities. The goal is to gather community input that will help guide the city’s assessment of its current parks system, develop project priorities and provide a foundation for pursuing grant opportunities.

Last summer, a total of 1,958 people responded to an online PROS plan community survey, with 99% of respondents stating that parks and recreation programs are essential to Edmonds’ quality of life, noted consultant Steve Duh. A total of 81% visited parks and recreation facilities a couple of times a month, with the vast majority (83%) headed to the beach/waterfront, he said. 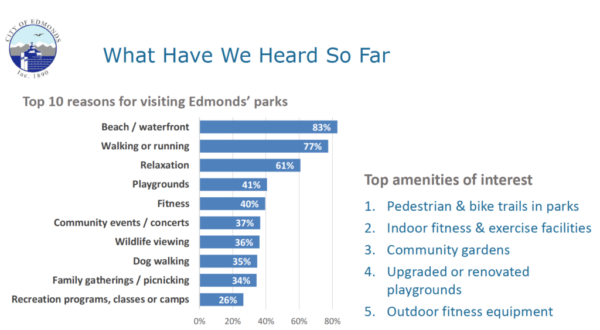 Survey respondents also identified their priority improvements to the parks system, which included:

– Connect gaps in the trail system and expand trail connections.

Those responding to the survey expressed the highest interest in the city’s recreation activities and program options. These included:

3. Youth programs such as summer day camps, arts or gymnastics.

The city said it also heard from residents that they would like to see additional park investments in south and southeast Edmonds, and along the Edmonds section of Highway 99. During Saturday’s virtual meeting, consultants shared two maps: one that showed parkland access and distribution within the city limits, and the other that included the addition of county-operated parks, such as Southwest County Park and Esperance Park.

After receiving an overview of what the city has heard so far, those attending Saturday were invited to participate in a series of multiple-choice polling questions.

The first of these asked respondents to prioritize up to three areas of Edmonds that the city should priorities for parks investments during the next six to 10 years. The Highway 99 corridor and southeast Edmonds each received 81% of responses, with north Edmonds coming in third at 54%. Southwest Edmonds earned 42% of votes and downtown received 15%. 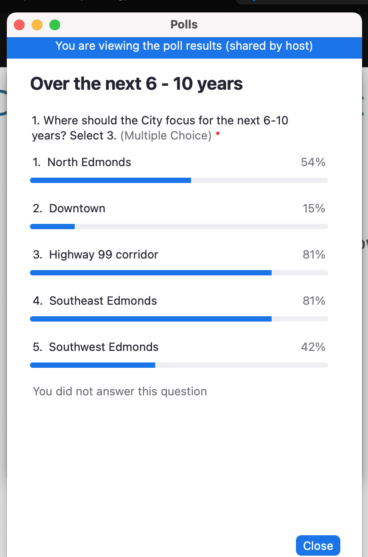 Next, attendees were asked to pick just one improvement they would make to the Edmonds parks system, out of the following amenities.

– Picnic shelters and tables for gathering.

Votes were divided among the choices, with additional community gardens the top choice at 30%, improved restrooms at 20% and playground upgrades and improved park maintenance tied at 17%. Of the remaining choices, picnic shelters earned 13% of the votes and a bike skills area got 3%. No one voted for playground shade structures. 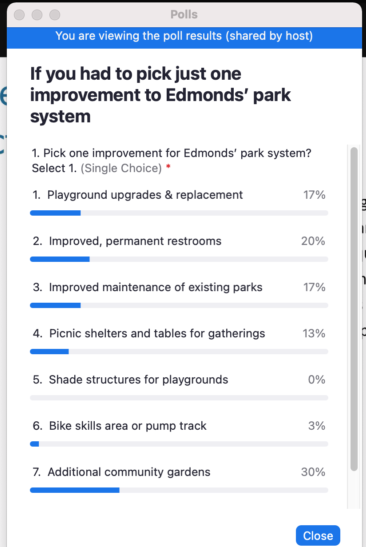 Saturday meeting participants also were asked to share via Zoom comments their ideas for improving existing parks. Among the ideas:

– Prioritizing the purchase of the Unocal property, currently undergoing environmental cleanup, next to the Edmonds Marsh.

– Prioritizing the conservation needs of parks to address erosion problems, especially in Yost and Maplewood parks, and more emphasis on use of open space.

– Better irrigation monitoring overall to ensure lawns are not overwatered and muddy.

– More park benches in a covered area for the occasional rain shower.

– Functional toilets. “Porta-toilets are better than nothing at all,” one attendee said.

– Mountain bike locations with public education about where mountain biking is safe and permitted. “There is a lot of mountain biking activity on small trails in Yost Park, and people are unclear as to whether this is a permissible activity,” a meeting attendee said. Edmonds Parks, Recreation and Cultural Services Director Angie Feser noted that city code does not prohibit the use of bikes in parks.

– Possible interlocal agreements with Snohomish County to improve amenities at Esperance Park and with the City of Mountlake Terrace regarding better access to Ballinger Park.

In another polling question, attendees were asked to share their opinions about what the city should consider in addressing residents’ desire for additional parks and recreation events and programs. The choices included:

– Don’t change anything — keep the existing range and variety of events.

Of those responding, 41% said they would prefer more small, neighborhood events, while 25% said don’t change anything. More medium-sized events were selected by 16% of those responding while 6% said they would like more big events. An additional 13% offered a range of fill-in-the-blank ideas, including a focus on Edmonds’ International District and Highway 99 events. 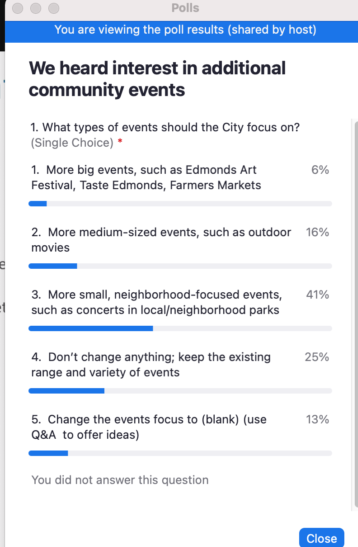 The polling then shifted to aquatics and pool use. The issue, noted consultant Steve Duh, is that Edmonds’ outdoor Yost Pool is 50 years old and facing maintenance challenges. A 2009 City of Edmonds Aquatic Feasibility Study suggested replacing Yost Pool, and the community has expressed an interest over the years in having an aquatics center. If Yost were replaced, should that replacement be a small, local pool or a large regional pool, and should it be indoor or outdoor?

Duh then went through the price point for each option.

Replacing Yost with a similar-scale outdoor pool would cost between $4 million and $6 million. An indoor “local-scale” pool might cost $15 million to $20 million. A regional-scale outdoor pool would cost between $10 million to $12 million, although some of the cost could be offset by visitors from areas who would pay admissions or class fees. An indoor regional pool (similar to the City of Lynnwood’s pool) could cost $30 million to $40 million. 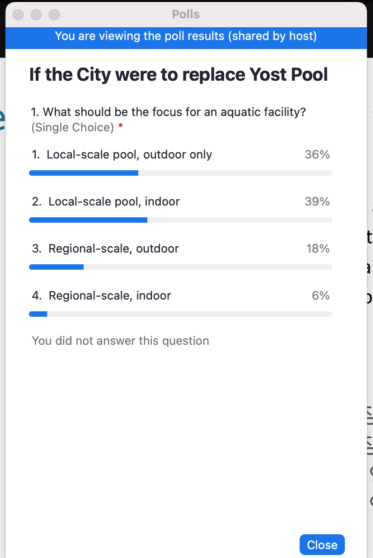 The final polling question focused on trails and connections, which included trails, paths and bikeways. The question asked what respondents saw as the most important options for improving trails in Edmonds, with instructions to select all that applied. 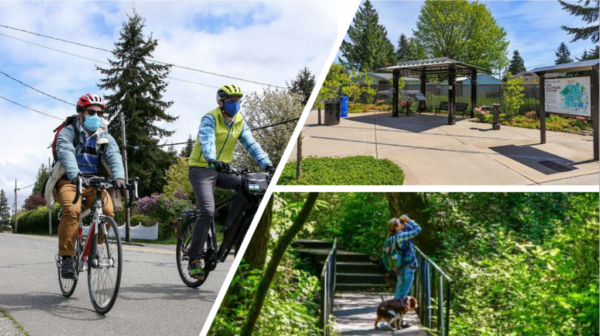