I’ve kayaked countless times since my first white-water paddle with the Penn State Outing Club in college. But it was never magical until I pushed off into 120-acre Lake Hope in Zaleski State Forest.

It was nearing dusk, and the only sounds breaking the silence were our paddles dipping into the water and a chorus of crickets. As my husband and I followed our guide through a sea of lily pads in search of beavers, the sun gradually disappeared behind the forest-draped hills, leaving only the silhouettes of trees against the star-filled sky. The only light came from a sliver of moon and the glow of the red safety light on the bow.

It was kind of spooky but also thrilling.

“It’s a different kind of sensory experience at night,” said our pilot, Mimi Morrison of Touch the Earth Adventures, as we set out. Danged if she wasn’t right. We were less than 200 miles from home but felt as if we were in another world.

We’d come to southeastern Ohio to unplug at one of the state’s most scenic and popular tourist attractions, Hocking Hills State Park, a 2,000-acre wonderland of extraordinary rock formations carved millions of years ago by glaciers in the Black Hand sandstone. It didn’t take long to see why it draws 4 million visitors a year.

Having only been in the northern part of the state, I’d always thought Ohio was one of the flattest places on earth. Turns out the Appalachian hill country that separates its farmland from the oldest mountain range in the U.S. is actually full of towering cliffs, waterfalls and hemlock-filled gorges. It also has its share of caves.

One of the most famous, Rock House, stretches some 200 feet in either direction with a 25-foot ceiling and seven arched “windows” separated by massive columns of solid stone. For thousands of years, it sheltered Native Americans, who cooked in small ovens carved into the rock walls. Robbers, bandits and murderers also allegedly hid out there in the 19th century, earning it the nickname “Robbers Roost.” 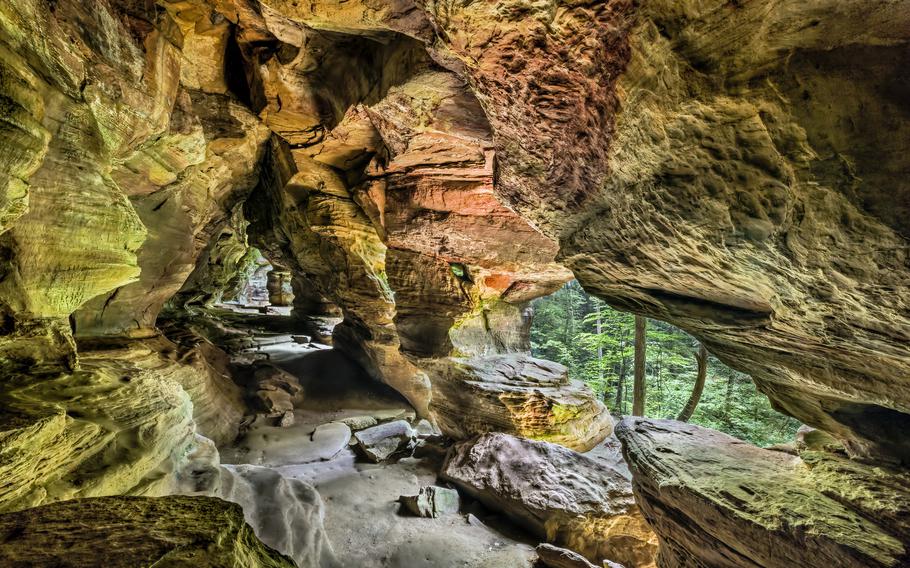 Rock House, a unique cave is located in the Hocking Hills of Ohio. (Dreamstime/TNS)

It’s a thrilling place to get back to nature, especially in fall when the forest air is crisp and the leaves turn brilliant shades of red and yellow. It’s also an exhausting one if you rush from site to site to site over a weekend, as we did. Give yourself a few more days if possible. The Hocking Hills region boasts more than 10,000 acres of unbroken forest filled with miles of trails, making it a boon not only for hikers and walkers but also birders and plant lovers, thanks to its diverse vegetation.

We had only 36 hours to explore the area by foot, bike and kayak after checking into our rustic cabin in the woods, so we only scratched the surface.

Our adventure started with an easy half-mile hike to a park favorite, Old Man’s Cave. The visitors center was out of maps, so we simply followed a crowd into the woods. Because it was Saturday, Grandma Gatewood Trail was congested at the head, thinning when we hit the first set of stairs and then a short but memorable rocky ledge without a railing. The trail loops 1½ miles back to the visitors center past waterfalls, a deep, bowl-shaped streambed known at the Devil’s Bathtub and an A-frame bridge over the gorge. Old Man’s Cave is named for a hermit who supposedly lived (and died) in its recesses in the early 1800s. Eager to explore, I followed a teenager’s lead and crawled inside its hollowed opening to look for bones.

Legs sufficiently warmed, we continued on the Hemlock Bridge Trail to Whispering Cave. One of the park’s newer sites (it opened in 2017) and the second largest cave in the region, it spans nearly 300 feet with a seasonal 105-foot waterfall spilling from its upper rim. A set of steep wooden steps deposits you inside its recesses, and the trail allows a close look at the sandstone’s honeycomb weathering.

If we’d gone the other way, we would have ended up at Cedar Falls, the park’s most voluminous waterfall. We chose to see it the next day via a short walk down some stairs from a parking lot. We also drove to Rock House, then hiked a mile from the shelter to its dramatic opening. It was easy on the way down but not back up as the massive, tunnel-like corridor is midway up a 150-foot cliff.

We accidentally happened upon the John Glenn Astronomy Park. Save for an interactive sun dial, there’s not much to see in daylight. But at night, it would be a great place to look at the stars through an enormous 28-inch telescope in the roll-off roof observatory. (Free guided stargazing on weekends has been suspended during the pandemic.)

We missed Cantwell Cliffs in the park’s northern reaches and also Ash Cave, the park’s marquee attraction, because we ran out of both time and energy. Next time, we promised, as we refueled with pints of stellar IPA at Brewery 33’s outdoor beer garden. The gourmet pepperoni pie ordered in from Pizza Crossing in Logan also hit the spot.

The following morning we took a 15-mile bike ride along the Hockhocking Adena Bikeway on the old Columbus and Hocking Valley Railroad bed in Nelsonville. The first couple of miles are nothing special, but once you pass Hocking College and enter the woods, it’s terrific. The 21-mile path is named for the region’s first inhabitants, Shawnee tribe members who named the Hocking River. They actually called it “hockhocking,” which means bottleneck and refers to the river’s twisted shape.

Of special interest is Robbins Crossing, a completely restored 1850s living history village on the edge of campus. There are blacksmithing and basketweaving classes and other events throughout the year, and students often demonstrate frontier toys, games and Appalachian crafts.

Nelsonville is where you can hitch a ride on the Hocking Valley Scenic Railway, which has three open-air passenger cars converted from old freight cars. Fall foliage rides run Thursdays through Sundays throughout October.

The day also included a short drive around Logan Lake, which offers boating, swimming and fishing in season along with year-round hiking.

A friend had recommended the short drive to Laurelville to check out Jack Pines Studio, famed for its blown-glass pumpkins, ornaments and vases. But once we caught sight of Jimbo’s Burgers in South Bloomington, a late lunch seemed the better option. The $7 hoagies didn’t disappoint.

After a short rest at our cabin in the woods, we headed south to Lake Hope in neighboring Vinton County for our evening paddle.

We’d planned on getting there early. A shortcut on a country road not only got us hopelessly lost but also made us nearly a half-hour late, with no cell service to make apologies. Our late arrival didn’t seem to faze Morrison, who has spent her life hiking these woods and paddling its lakes and rivers. The guide for Touch the Earth Adventures met us with an easy smile and instantly buoyed our spirits with her obvious passion for the water.

“You’re in for a treat,” she enthused as we strapped on life vests and carried the kayaks down the concrete slip way.

As we paddled up the lake, ferrying between a gazillion water lilies, Morrison recounted…

Read More:Ohio’s Hocking Hills is a magical mix of rock, water and woods — especially in autumn