18 Trail Milestones for my 18th Birthday

Yesterday was my 18th birthday! It might sound a bit ridiculous, but I did really wake up feeling different. The night before I slept better than I had in weeks, which was a huge relief as not getting a good night of sleep can upend my entire day. But I rushed out of camp early, got up the first mountain and sat down to eat second breakfast (I am a bit of a hobbit these days). I couldn’t help thinking, as I peered over treetops at the Vermont mountains, how lucky I was to be able to spend my 18th birthday doing what makes me happiest. Not to mention the fact that I really don’t mind the solitude. Later in the morning I met up with another SOBO named soups and we walked most of the way into town together, before splitting up a few miles from the road. After a few pretty climbs, I descended the last 3 miles to route 11 and hitchhiked into town so I could eat a real birthday meal and spend the rest of my afternoon browsing the local bookstore (it was painful to not be able to buy the books I wanted to though). I don’t think I could have imagined a more peaceful, fulfilling way to become an adult. 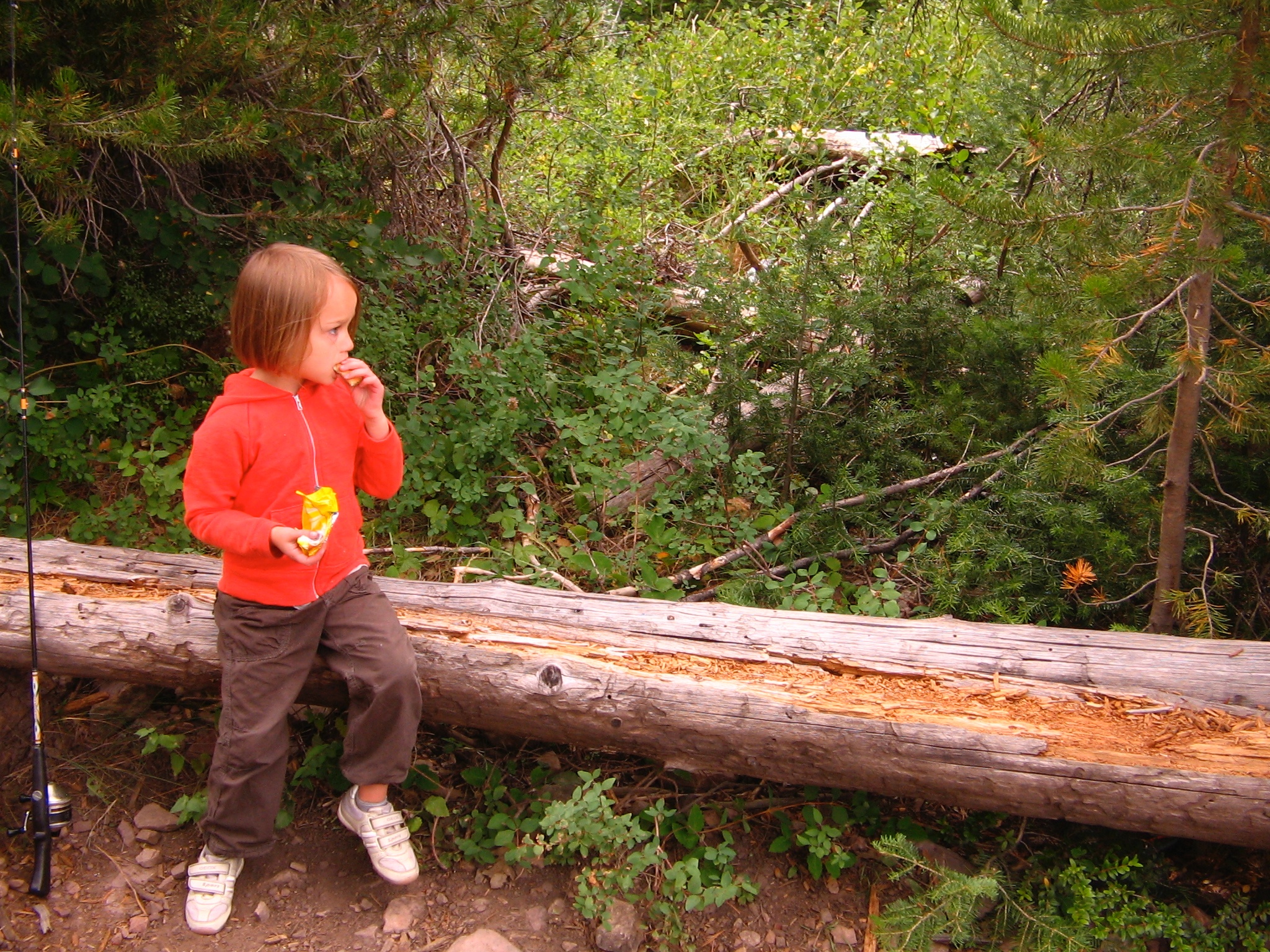 In honor of this milestone, I have compiled a list of other firsts from the past 2(?) weeks.

A few days ago I hit the 500 mile marker. I’m comparison to the many miles ahead, it does not feel so significant. But looking back on all the insane things I have done since leaving katahdin more than a month ago helps put those miles into perspective.  Time doesn’t feel like it is moving as quickly for me as it is for the rest of the world. I can’t believe summer is almost over and sometimes I wonder where all the miles went. 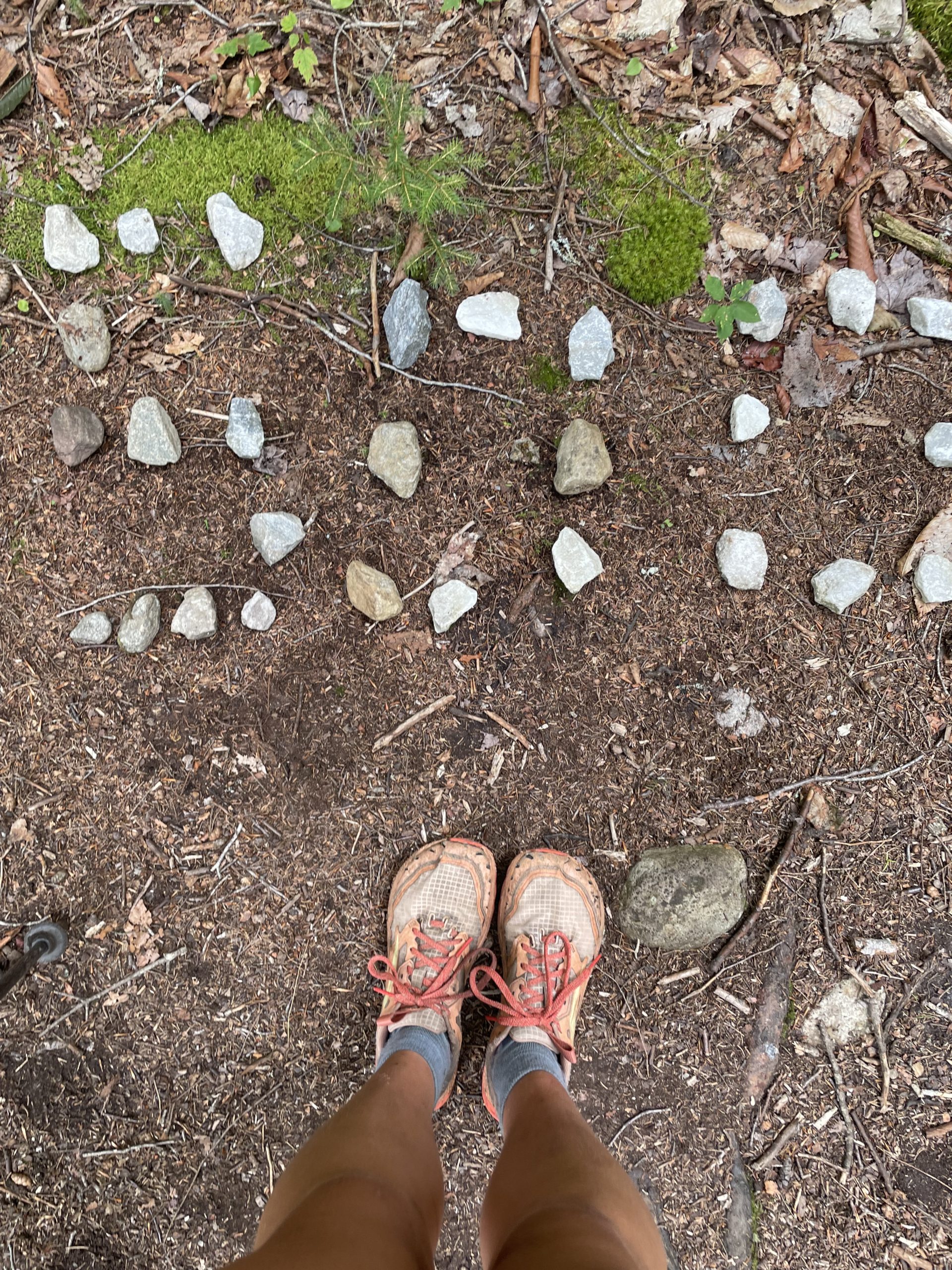 Featuring: my very worn out shoes

Upon finishing the white mountains, I walked into town, went to the grocery store and bought a quart of applesauce. And then I drank it. I was so hungry and desperate for anything more fresh than fruit snacks and freeze dried rice, not to mention the amazing number of calories that can be packed into a pound and a half of applesauce. It was a true hikertrash moment and I am proud of it.

Not long after the applesauce incident, I climbed my first real fire tower on top of smarts mountain (yes I know there was one in the mahoosuc range but I didn’t climb it). I looked longingly at the slightly less tall mountains to the south and ate a pop tart. The fire tower had been recently repainted to cover up the hiker messages written on the inside walls, but to no avail. I spotted a few names I recognized and smiled. There is something really comforting about seeing the names of hiker I met weeks ago in logbooks and shelters. It is a reminder that the trail is a living embodiment of the people who care about it.

After having plentiful water and good weather throughout Maine and most of New Hampshire, I hit a particularly dry spell for a few days in southern New Hampshire. Due to all the marked water sources being dry, I had to hike 2.5 miles one morning in upwards of 90 degree weather without water before I encountered a water cache near a road. Thank goodness for trail angels – I would have been in a really dangerous situation without that water.

You’ll notice that many of the shelters and privies along the trail are chewed up and riddled with teeth marks. That is because porcupines like to eat the salt from hiker sweat off of the wood. And while I’ve seen evidence of porcupines, I hadn’t ever seen one until a few days ago. I had stopped to look at a missing persons sign sittting on the ground when I noticed something large and black moving just a few inches from my foot. My first thought was that it was a baby bear, but when it moved it’s quills became visible. I stood very still and watched it waddle away slowly before climbing a tree a few yards off, using its tail to push itself upwards like an inchworm. 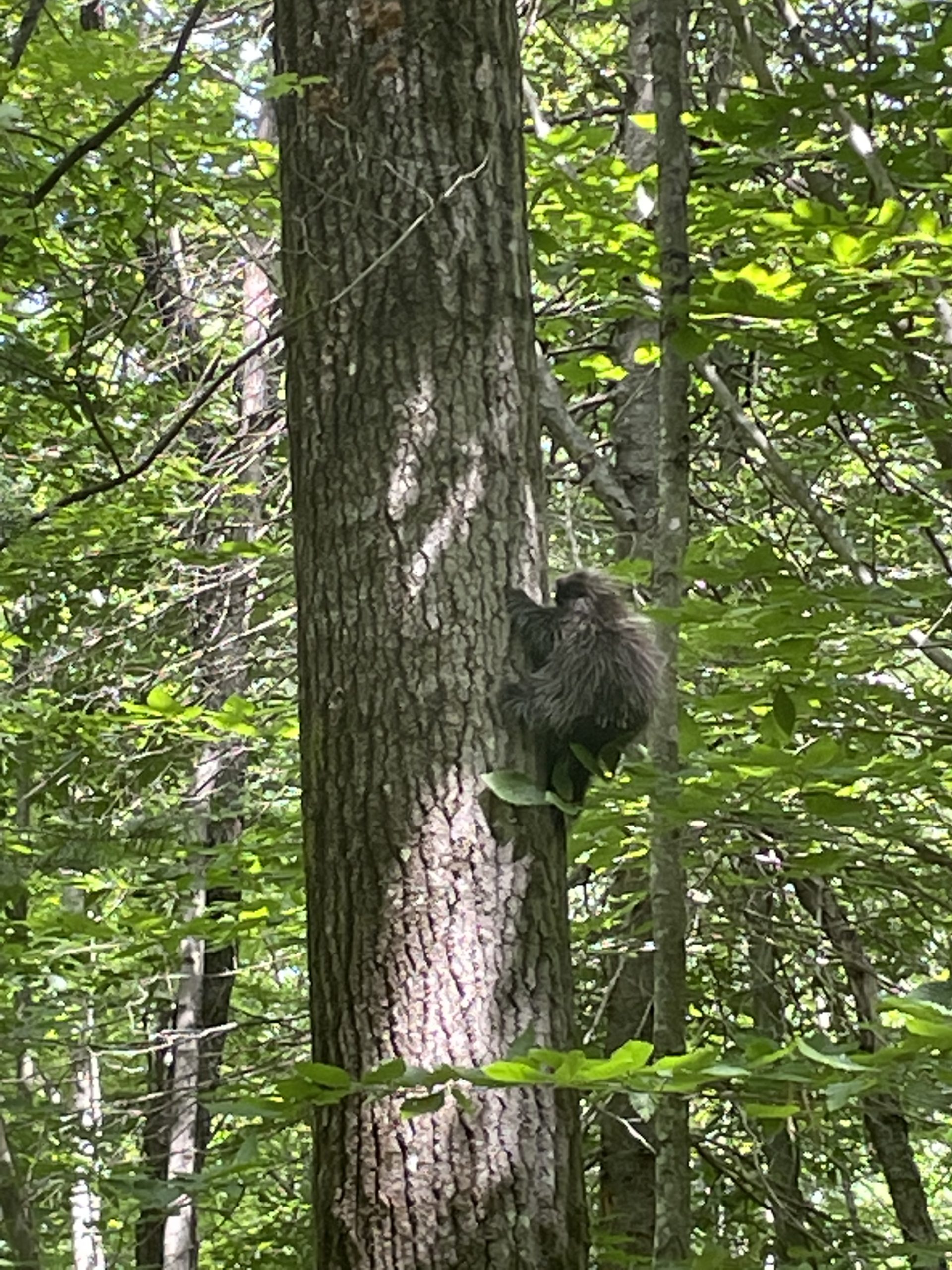 If only porcupines were less prickly – they are so cute!

Normally I get into town to buy groceries by hitchiking, but there are a few towns along the trail that I get to walk right through. Hanover, New Hampshire is one of them. In order to cross the Connecticut river, the trail has to be routed through town and across a bridge that brings you into Vermont. After hanging out in the basement of the Dartmouth Outing Club (which maintains 50 miles of the trail), I got swiped into the Dartmouth dining hall and got to eat as much food as I could possibly want. I ate so much food in Hanover I was almost sick hiking out that evening. 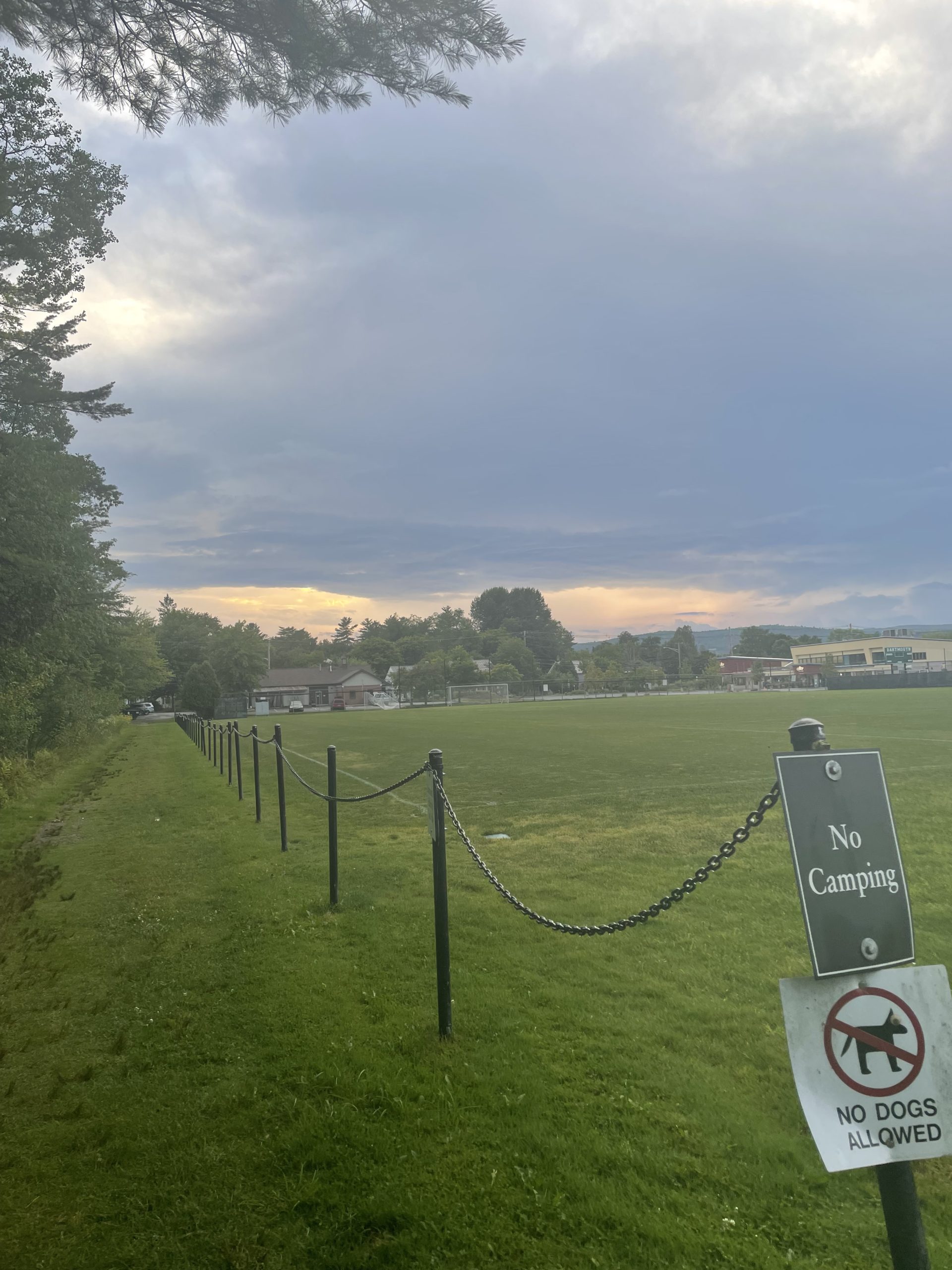 Walking into town! (Across the Dartmouth soccer fields)

I am now in Vermont! It is crazy to think that I still have 11 more states to travel through, but I am ecstatic that I get to celebrate the passage of time by moving through the states and exploring differ t parts of America. And while Maine was by far my favorite state, Vermont is proving to be nearly as beautiful! 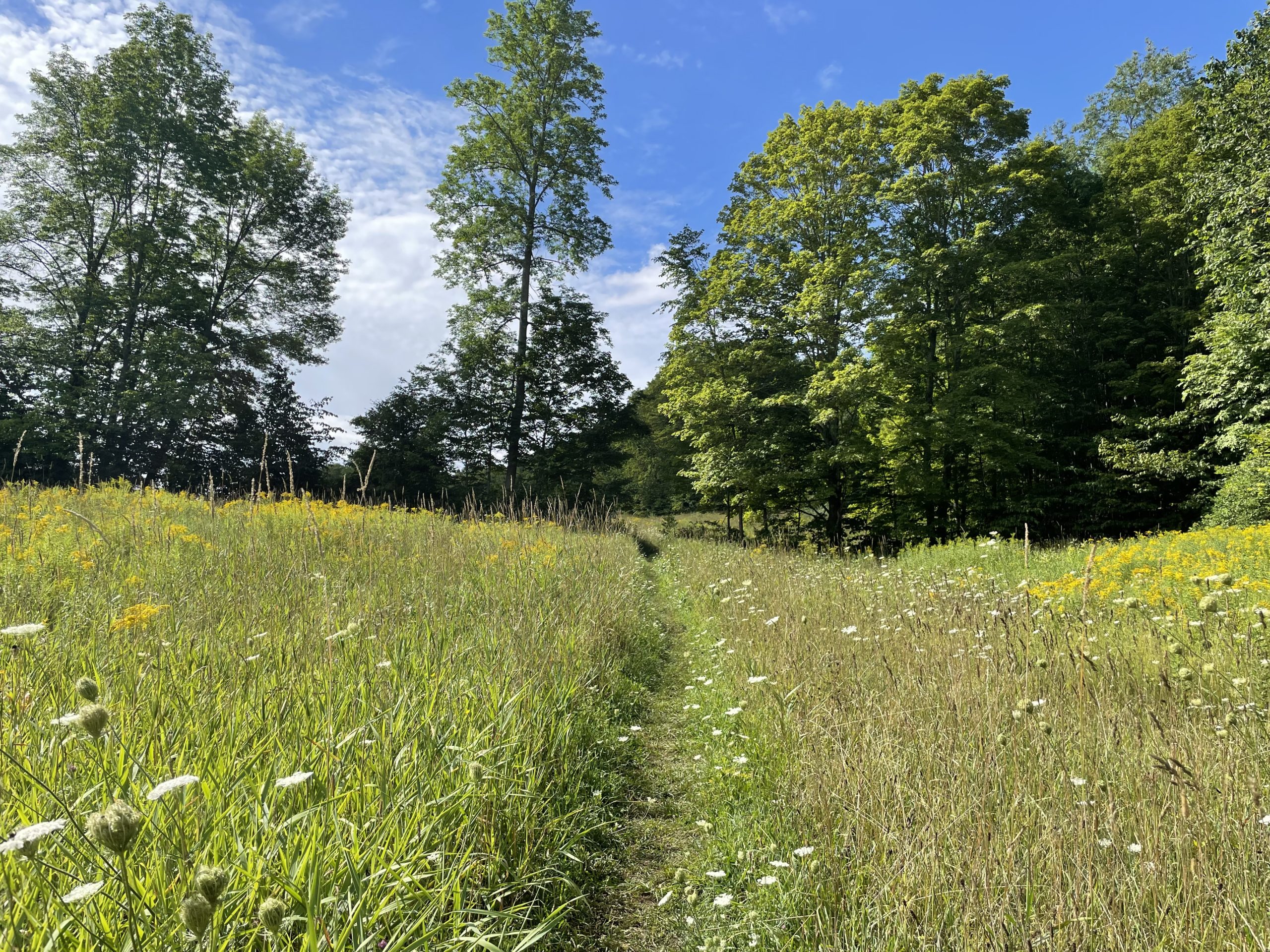 After doing a trip into town a few days ago to resupply, I made it back onto trail pretty late. With the sun already setting, I started looking for a flat spot to camp. After having no luck I kept hiking until I got to the next shelter around 10pm. I quietly changed into my pajamas, hung my food bag and inflated my sleeping pad before walking up to the shelter, setting up my sleeping gear and laying down. People were pretty surprised when they woke up in the morning and found they had a new friend!

This is a somewhat deceiving milestone, as I had my first full moon more than a month ago. But I slept straight through that one so the full moon I got on the night of August 11th was pretty spectacular. I had stopped for the night at an empty cabin near the AT that hikers are allowed to sleep in to escape a thunderstorm. The grey throng about this cabin is that it had a ladder ascending to the roof where there was a small platform overlooking the surrounding valleys. So I watched sunset, sunrise, and moonrise all in one night. It was incredible! 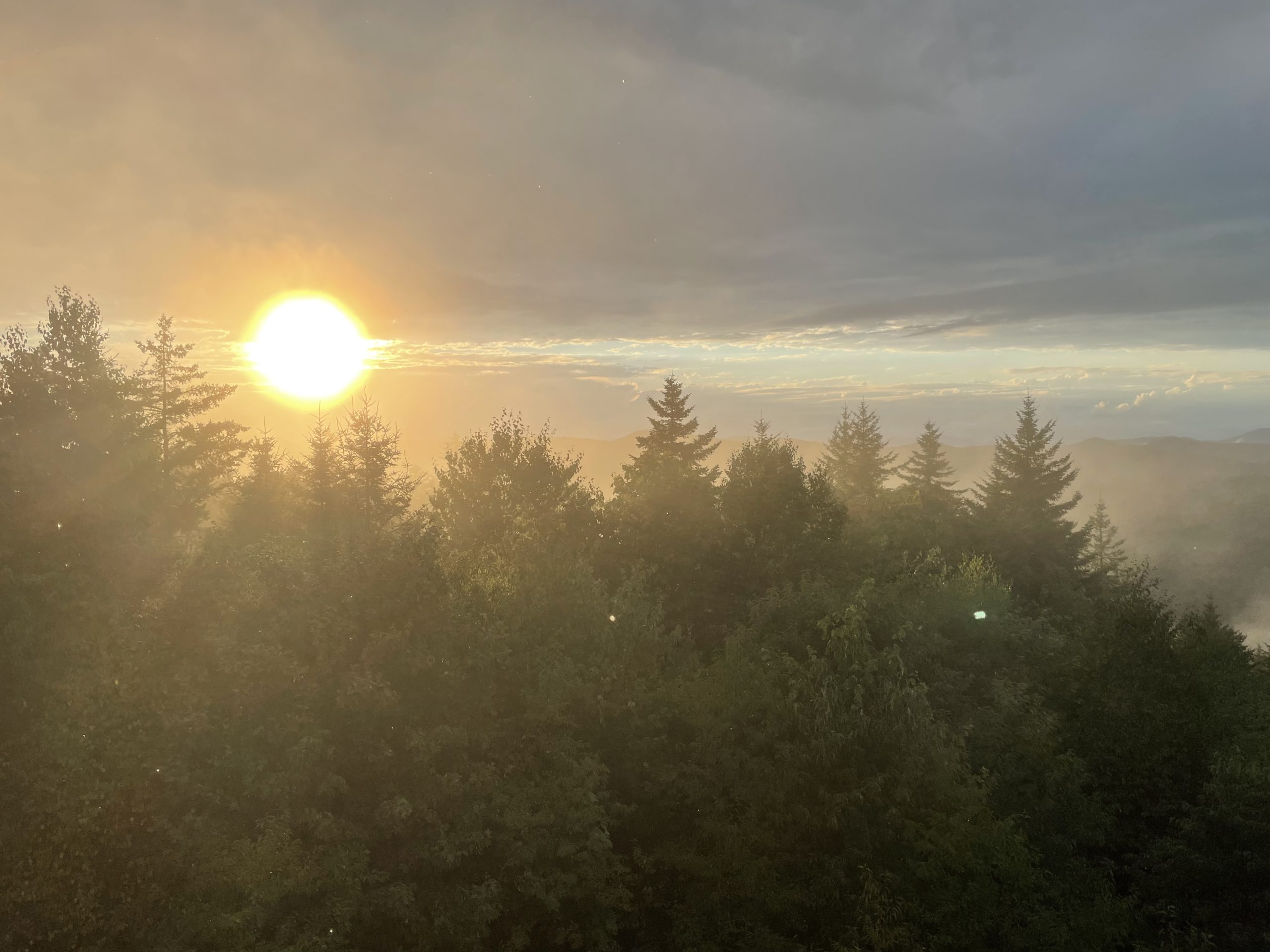 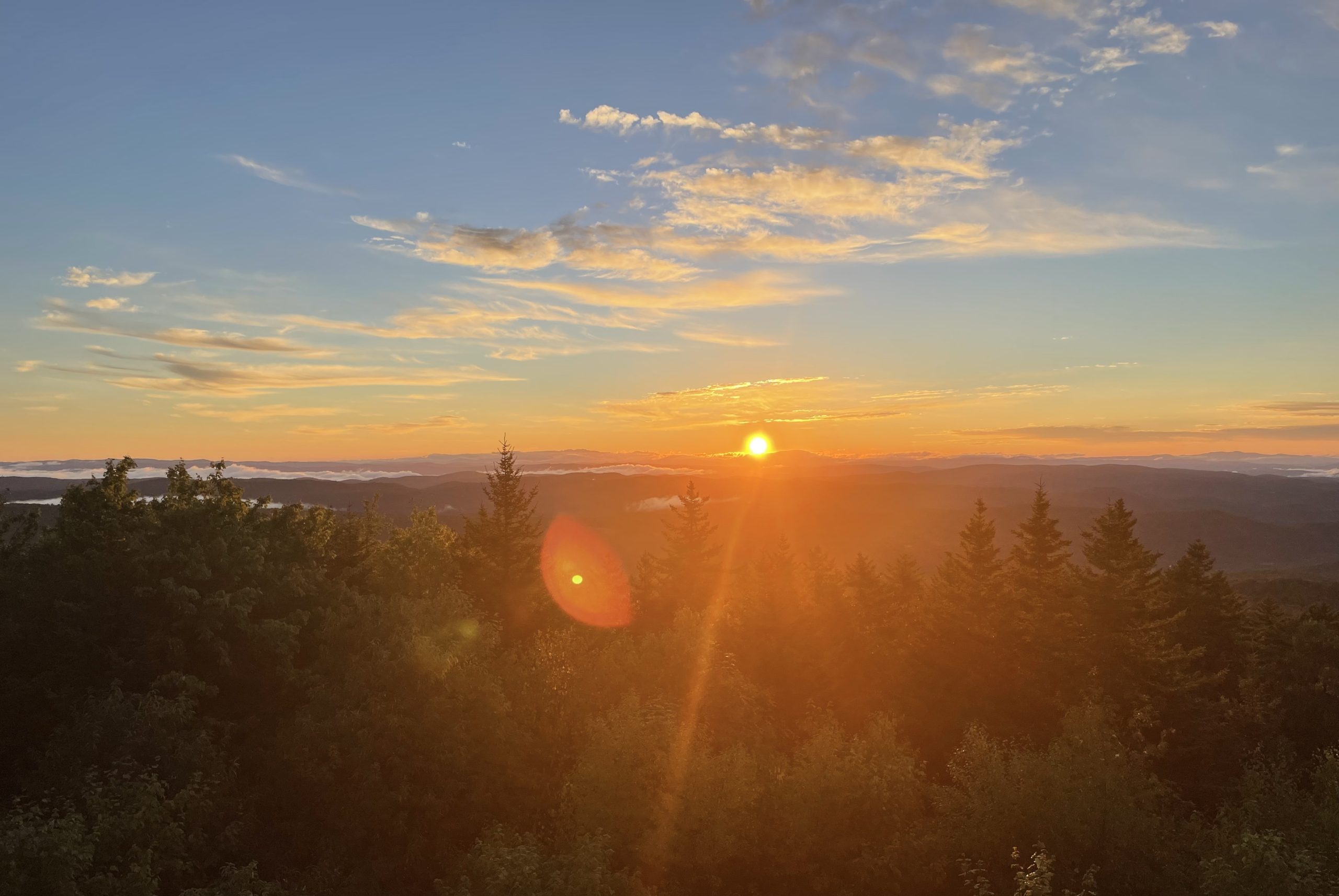 The same night I stayed at the cabin Ali also ran out of fuel for my stove and so I had to soak my food in cold water and a rather crunchy freeze dried meal for dinner. It wasn’t very appetizing, but it did the job. Thanks fully, I was able to pick up some fuel so I don’t see myself cold soaking again in the near future.

12 First time on the long trail

About halfway through Vermont, the AT coincides with the Long Trail, the first long-distance trail in the US that spans the length of Vermont from the Massachusetts border to Canada. The Long Trail is a popular shorter thru-hike so there have been a lot more people at campsites recently. But it has been very cool to meet new hikers and hear different stories from the northern part of Vermont that the AT does not pass through.

The AT often crossed small town roads and on occasion, these roads lead to delis is restaurants or farms. The act of traveling from one store to the next is called deliblazing. While New York is the state most famous for deliblazing, I have been able to eat several meals just off trail. The greenhouse restaurant had a fantastic blue cheese and bacon burger and was just a quarter mile work, the On the Edge farm store had a killer blueberry pie, and the Gouchberg Farms deli had really good pesto. After weeks of very little variety in my diet, it is nice to eat something new every once and a while.

Trail Angles often leave buckets full of water or snacks near trailheads and roads, but near a small farm I found a cooler full of homegrown cucumbers. I nabbed two and started munching – a great snack for a hot day on trail. 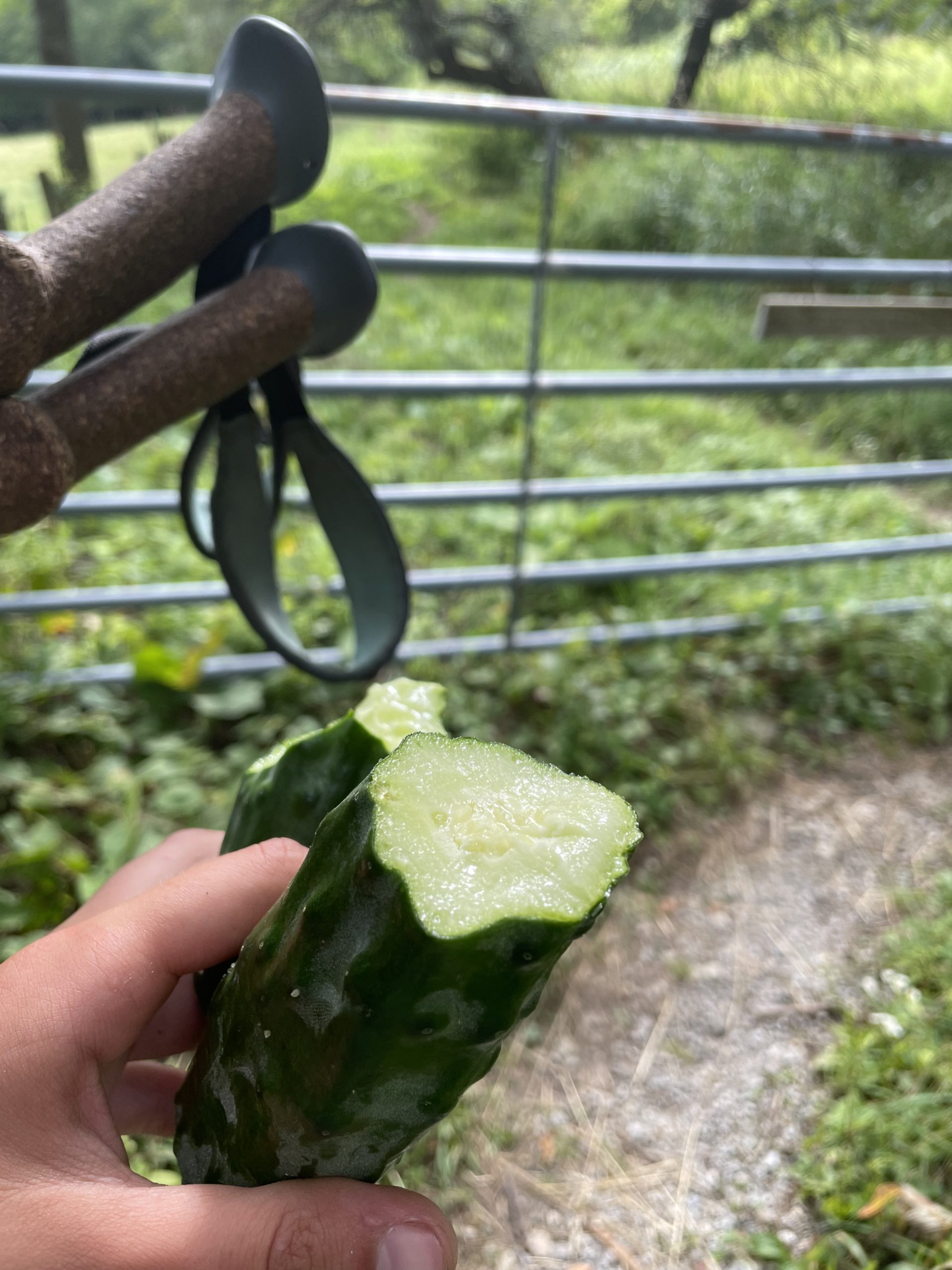 I really love mango. Like a lot. But unfortunately there was none to be found (at least for me) until a few days ago when I scored some dried mango at Walmart. I was so happy I almost bought a hole pound of the stuff but I resisted.

Yeah I know this one is a bit of a stretch, but the AT hikes over several large skiing mountains, and yesterday I actually got to hike down the ski slope on Bromley Maountain for a quarter mile – maybe someday I’ll come back and really learn how to ski so I can revisit the slopes I have hiked in different weather.

My shoes are getting pretty beat up, and I thought I would be able to make it another hundred miles on the same shoes but unfortunately it has become too painful to continue without new shoes. The soles of the shoes are so worn down that most afternoons are marked by a few hours of consistent pains and aches throughout the bottoms of my feet. I am getting a second pair sent to me in a few days and I am pretty excited!

18. First time camping behind a VFW

Last night I camped behind a VFW office, which has got to be the strangest place I have stayed this whole hike. But it was free and they had a small creek running behind the backyard with a chair in it to soak feet, so I can’t complain. 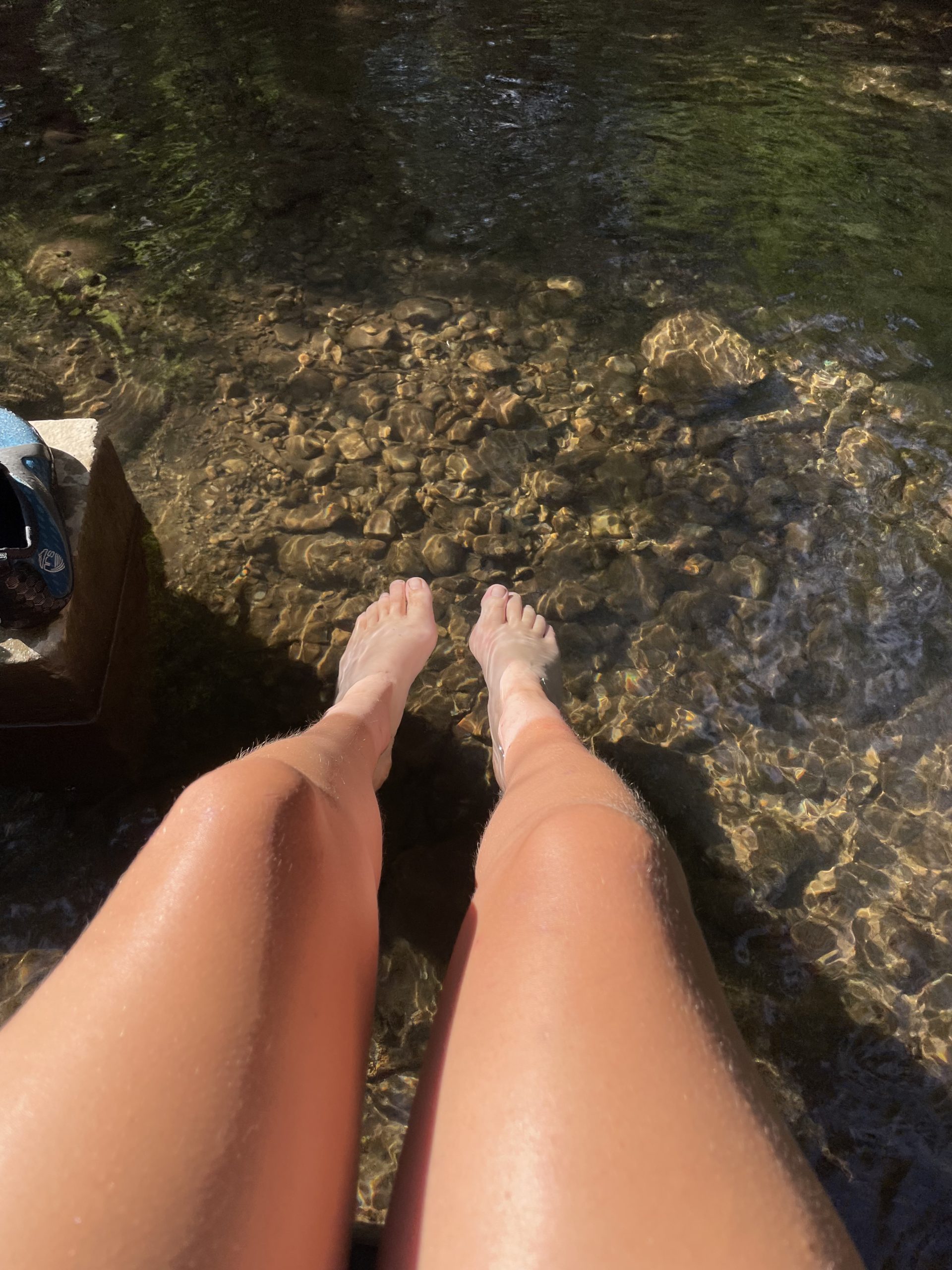 4 Best Car Insurance Agencies in Texas You Should Know

Best Deals From the REI Holiday Warm Up Sale