My mom and I had been hiking for four days through New Jersey, and we were hearing lots of stories about the Warwick Drive-In. Although it wasn’t in our original plan to go into Warwick, we decided that a drive-in movie theater experience was a necessary addition to our AT journey. So we hiked a short, 10 mile day to the Warwick Turnpike, where we encountered two fellow thru-hikers (a couple who got married on trail in Hot Springs, NC – Happily and Ever-After). They were about to try hailing an Uber, and were happy to share the ride with us.

Within 11 minutes of confirming the ride in the Uber app, a car arrived to pick us up from the trailhead. The four of us piled into the small hatchback with packs on our laps, and our driver took us the short distance down the Warwick Turnpike to the drive-in theater.

It was early afternoon, and we were the first hikers to arrive at the drive-in that day. We scoped out the hiker camping area, which is up on a hill overlooking the grounds. There are three large screens, a small building with restrooms and snacks for sale, and ample parking in front of each screen. We pitched our tents, then walked across the street to Pennings Farm Cidery where a local band was playing classic rock tunes and families were gathered drinking hard cider and eating burgers. My mom and I eagerly joined in, ordering delicious dry ciders and big, hearty burgers. We sat out in the sun, enjoying the tunes and the food.

After a few hours of precious relaxation time at the cidery, we crossed the street to do our resupply. We wandered the aisles of the large grocery store searching for our favorite snacks and dehydrated meal combos, then made our way back to the drive-in. By this time, a good crowd of thru-hikers had arrived and we were a part of a small tent city perched on the hill overlooking the large movie screens. We were happy to see lots of familiar faces, including a few good friends. Everyone was excited at the prospect of catching a movie for the first time in months, and everyone was stinky and sweaty in their trail clothes, since there’s no place to take a shower to do laundry within walking distance of the theater.

The scene at the Warwick Drive-Inn

I watched “Thor: Love and Thunder” with about 15 fellow hikers while laying on my air mattress on that hill overlooking the theater grounds. The theater provided us with several small, cheap radio boomboxes so that we could tune into the AM station that broadcasts the movie soundtrack. It was a surreal experience to watch this big budget Hollywood flick in this unusual setting with heavily distorted audio blaring from tiny side-by-side radio speakers.

While a number of hikers stayed up to watch the later movies that started around 10:30, I was exhausted from the day’s hike, and quickly fell asleep in my tent as Jurassic World played in the background.

My mom and I were packed up before 7am the next day, and we walked from the drive-in down to the grocery store to grab some breakfast and call a shuttle. Soon after we arrived at the Warwick ShopRite it started to rain – just a drizzle at first, but soon it was pouring. The entire group of thru-hikers who had stayed at the drive-in the previous night soon arrived at the ShopRite, where we all congregated under the overhang near the store entrance. Most of these hikers had decided to take a zero day as soon as the rain started, but my mom and I, along with a few others, were still eager to get back on trail.

I pulled up Uber on my phone since we’d had such great success hailing a car with the app the previous day, but there were no drivers within range. So I dug through the comments on FarOut/Guthook looking for the numbers of shuttle drivers in the area – I found three numbers and called all of them. Only one person responded, and she wasn’t available to give us a ride until mid-afternoon.

We contemplated walking back up to the trailhead, or trying to hitchhike, but there’s no shoulder on the Warwick Turnpike, and hitching is illegal in New York. It would have been a treacherous 2.5 mile walk along the roadside in the rain, so we decided to wait it out, and catch a ride when the shuttle driver was available later that afternoon.

We hung out with a group of about a dozen thru-hikers under that overhang near the entrance of the Warwick ShopRite for at least 3-4 hours. We took turns watching each other’s backpacks as folks entered the store and wandered the aisles looking for snacks and killing time. A side trip to a local dispensary proved to be a fruitful adventure that killed about an hour. Eventually, my mom and I migrated across the parking lot to a small bagel shop where we could sit inside and charge our phones.

By the time our shuttle driver arrived it was around 1:30 in the afternoon. The sun had come out and it seemed like the rain and thunderstorms had passed. My mom and I were confident that we had enough time left in the day to make it 12 miles to Wildcat Shelter. We eagerly jumped into the minivan when it arrived and in just a few minutes we were back at the trailhead.

The first few miles of hiking that afternoon were mild and largely pleasant. The rain started to fall again, with thunder and lightning in the distance, but I wasn’t too worried about the weather. As we got closer to the New Jersey – New York border however, the trail climbed up onto a rocky ridgeline. Soon, we were scrambling across large boulders that were covered with slippery green lichen.

I stopped and waited for my mom where the NJ/NY border was marked with white paint on the rocks. As I waited, the sun emerged from the clouds and it seemed like we’d have a respite from the stormy weather. My mom arrived and we sat out in the sun, eating snacks and hoping that the wet rocks would dry out before we resumed walking.

That was the last that we saw of the sun. The rain and thunderstorms returned as we continued along the rocky ridgeline of Bellvale Mountain. By the time we reached Prospect Rock, the highest point on the AT in New York, the sky was dark and foreboding, and the rocks were dangerously slippery. We stopped to take a quick photo alongside the tattered American flag that flies on top of Prospect Rock, then continued the rock scramble. 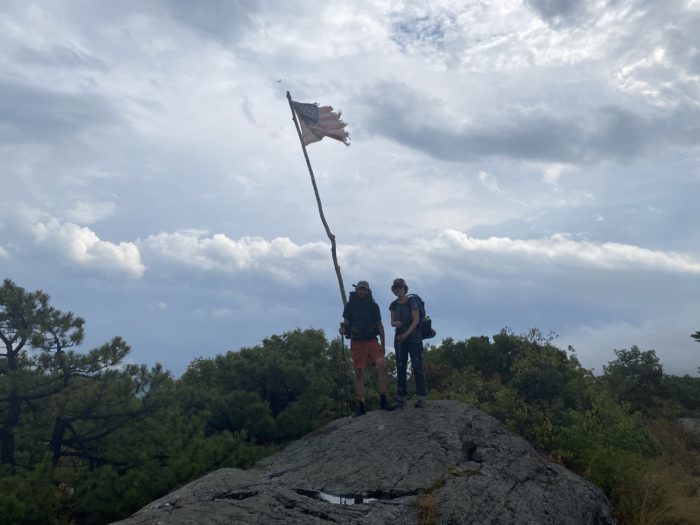 My mom and I at Prospect Rock – the highest point along the AT in New York.

By this time, my mom and I realized that we were in a truly dangerous situation. Stepping across the lichen-covered rocks felt like walking on a soapy bathroom floor – we had to be extremely cautious, even when the rock surface was perfectly flat. We had no choice but to continue – there’s no place to camp up on the ridgeline, and it would have been just as treacherous in either direction.

I slipped and fell several times, landing hard on my tailbone, but luckily didn’t do any serious damage. My mom fell more than a few times, once wedging herself between two rocks in such a way that I had to help her remove her backpack so that she could stand up. We’re extremely lucky that the only injuries we incurred were scrapes and bruises – a fall in the wrong place could easily have spelled the end of our hike, or worse. 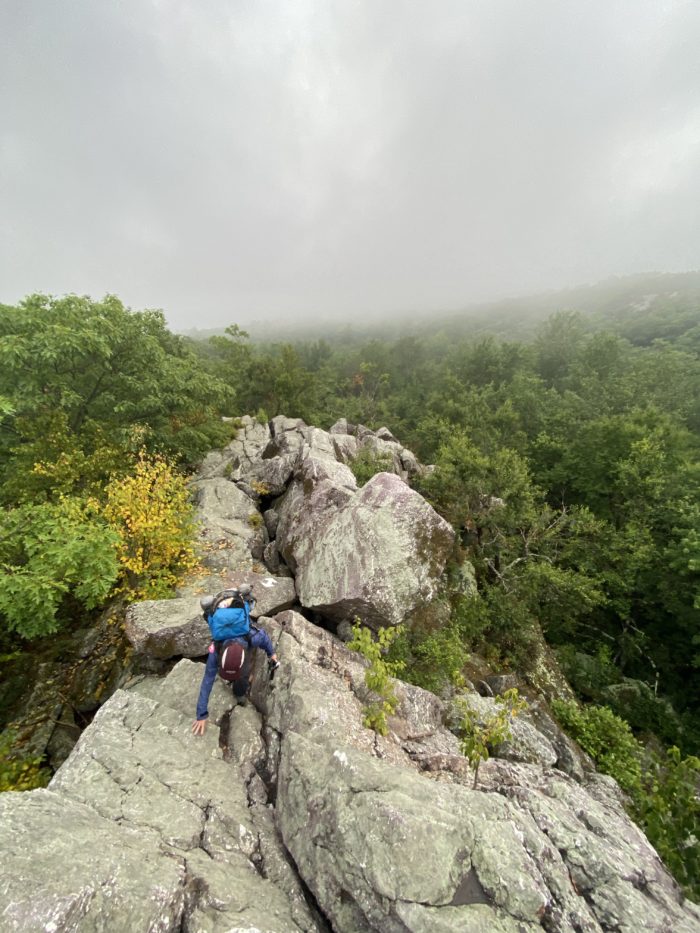 My mom climbing across the slippery rocks of Bellvale Mountain, NY.

With adrenaline pumping, we continued across the ridgeline of Bellvale Mountain for what felt like endless hours. Our pace had slowed to a crawl as we maneuvered across the slick lichen-green rocks, and soon we started to lose daylight. Wildcat Shelter was so close, but those last few miles felt like an eternity.

We finally arrived at the shelter just as darkness was setting in. There were only two other people at the shelter, and they had likely climbed inside their tents to go to bed hours ago. We quickly assembled our tents and I decided that we needed a hot meal, despite the late hour. I cooked instant rice with rehydrated mushrooms, sardines and butter by the light of my headlamp. It was one of the best meals that I’ve had on trail.

The rain, which had subsided to a light drizzle while I cooked, returned in full force just as we finished our meal. It began to pour as I gathered up all my food and ran it over to the nearby bear box. I climbed into my tent that night soaked to the bone. I peeled off my wet clothes, pulled my sleeping bag up and over my body, and was asleep the moment my head hit my sleeping pad, oblivious to the pounding of large raindrops hitting my tent.

Top 10 Hiking Gift Ideas – For Every Hiker on Your List

6 Ways To Preserve the Memories

My Big Three, and some other extraneous things…