We had a zero day doing grocery shopping  sending two resupply packages and doing laundry as well as eating and drinking with the Slim-O that is another SoBo group. Too much walking for a zero day. The bizarre fruit dressed up Sweet’n’Juicy were performing at the brewery, but we took off early since our internal clocks tell us to sleep at 9 p.m. 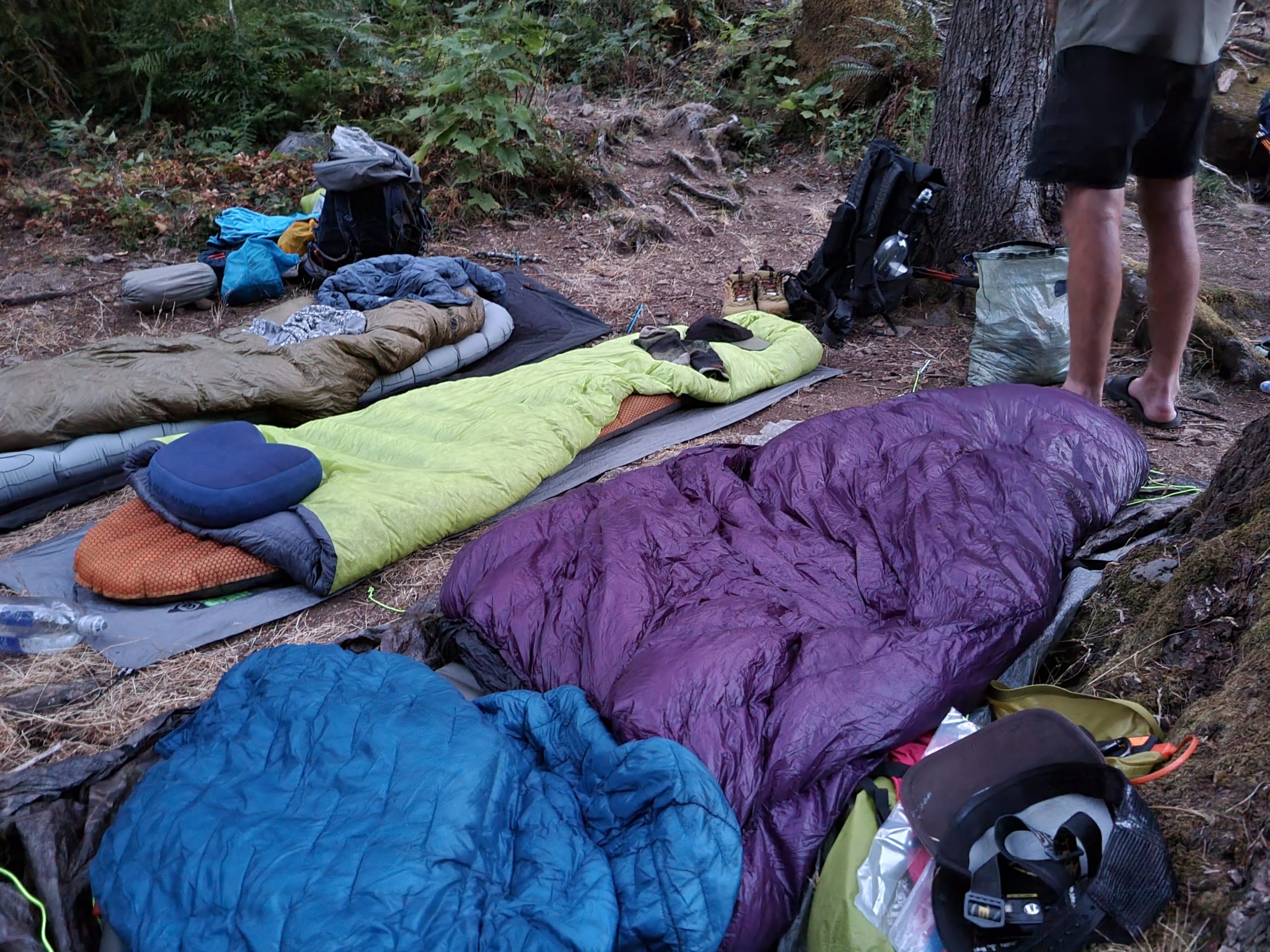 We were sleeping for around 11 hours and had a breakfast in a typical American diner. We took a bus back to The Cascade Locks from a strange location.

Back in the Locks I wanted to get a last ice cream before hitting the trail. When I came back the crew had gotten sucked into the brewery again. And so we drank one more beer for the road. Since everybody else had bought a round I asked if everybody want a second one and of course they did. And after that everybody else wanted to buy a round. So the town vortex was real.

After a couple of hours me, according to the Chinese tradition, as the oldest person decided it was time to eat. So we went to The Ale House for pizzas and more beers. After six rounds it was obvious we weren’t even going to hike the intended 10 miles of the day, but I insisted we won’t at least do another zero.

Poca went and bought some beers for the road and we started hiking. As Croc is hoping to get a Triple Crown one day he went on via the official PCT. We chose the more scenic Eagle Creek Trail that 99 % of hikers do. It was hard to walk uphill having liters of beer in ones belly. We managed somehow walk 7 or 8 miles before dark, though. The tentplace we found was in the middle of a burn area and so small we had to cowboy camp side by side. Poca went around the spooky burned forest dressed in his mosquito net and looking like a horror movie character. Anything to keep the intruders away at night. 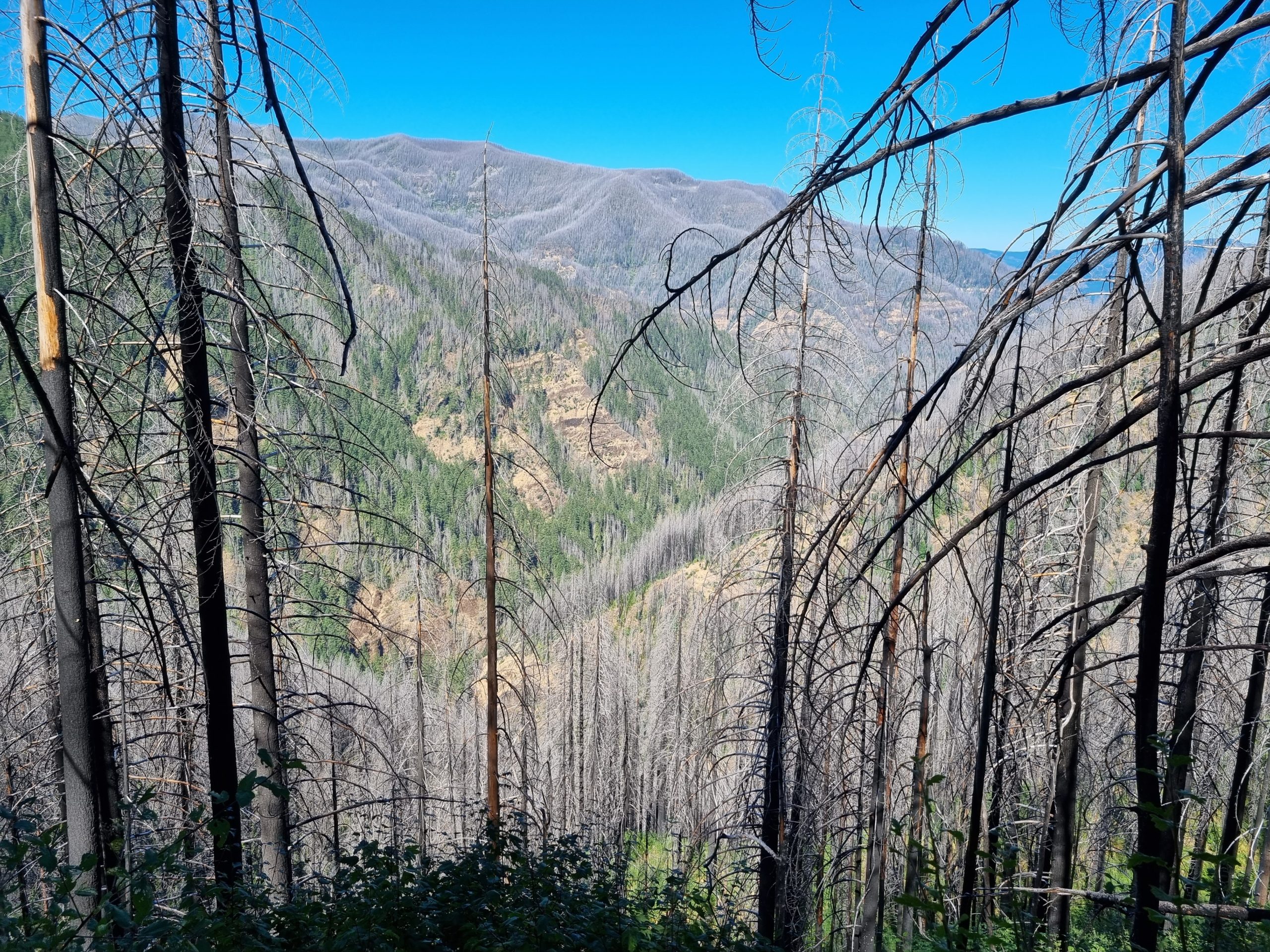 I woke up by the sunlight and started hiking at 7. The trail was passing through nice waterfalls, such as the huge Tunnel Fall that you have to pass from behind.

We met up with Rockslide and Princess Bubblefeet that had flipped to California and were on their way to Washington. They seemed to have had a miserable time caught in wildfires, thunderstorms, floods and with a drunk trail angel. It started to sound as if we had less misery doing Washington which was not just a little misery either.

We had to walk through a burnt forest and then up on a hill. I took a wrong turn and saw Poca behind me on a turn up, since he didn’t tell me to turn back I kept on going and thought he had stayed behind to have a poop. Since my Farout was slow it looked like I was walking on the correct trail. Only later I realized I was not on the right track since there were no NoBos coming from the opposite direction.

I had to turn back and climb the hill from hell that was the last miles of the Eagle Creek Trail. I was so pissed I just kept on going and didn’t fill up water. I asked one NoBo how far the next water source is, since Farout didn’t show any miles for me, and after hearing it would be 5,5 miles she gave me some water. Again I missed the next source and had to walk the whole day with very little water. I was exhausted and pissed and had to stop on a mountain to reload The Farout app to know how far I had walked.

I was assuming the others had passed me after I took a poo in the most weird position so far, and slowly dragged myself forward. I realized I would not be able to walk far after I crossed some blowdowns, that a NoBo was telling me how to cross (sure we’ve never crossed any before!) and came down to a tentsite that had a marked stream. It was a shitty muddy barely flowing pond and I was just about to head 4 more miles to the next one, when I heard Dolphine Number 3 behind me. He, Poca and Skratch had decided to camp at the same spot and we could borrow a waterpump from a hiker. Even Sherpa that was hiking SoBo came to the camp.

The day was so unmotivating I drank my emergency Moonshine. 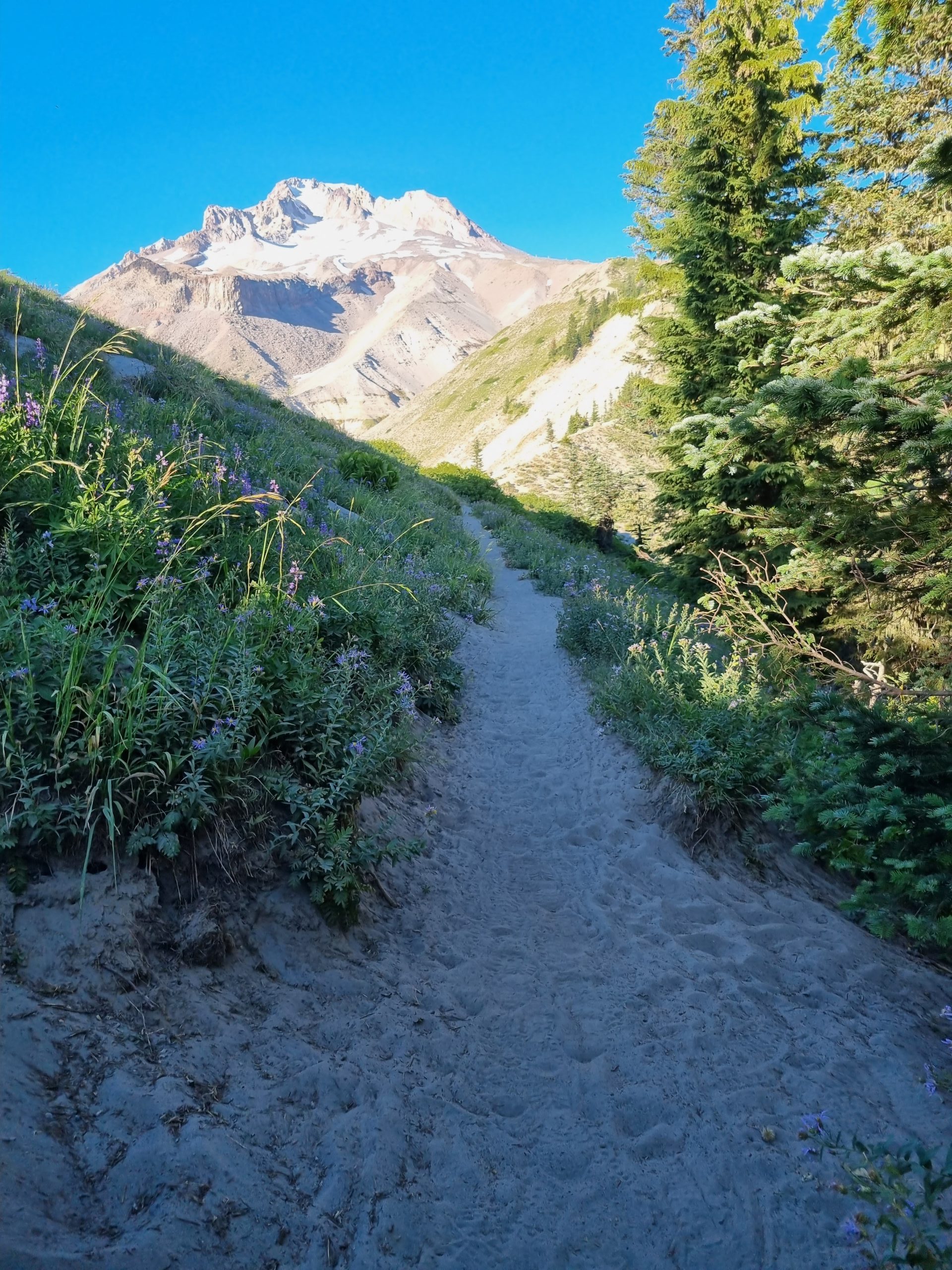 We woke to a beautiful sunrise and when NoBos got up after 4 a.m. We had a breakfast by a creek where a hiker was snacking some edibles and offered even us some. We said thank you, 8 in the morning coffee is enough. Many hikers are using a whole lot of drugs on the trail.

The trail was going up and down a crazy hill, and then we got to what was known to be one of the worst SoBo climbs on the trail: The climb to Timberline lodge. Over 5000 feet up in 8 miles. In total we climbed over 5800 feet up and went 3800 feet down that day.

The uphill was really sweatty, and me and Skratch had to stop every 30 minutes. Even Pocahontas was behind us. Rebound had left already earlier.

After hours and hours of uphill we came to a river where Croc and D3 were sitting. They kind of wanted to camp there, though we had booked a breakfast buffet  at the famous Timberline Lodge that is known from the film The Shining. I started hiking before the others and finally reached the last uphill. The place was magic and seeing the lodge coming from the mountains was kind of spooky.

I came to the lodge behind a bar where people were drinking. They asked if I was a PCT hiker. My legs and feet were covered in mud, I was super dirty but I marched to the bar and ordered a beer. The bar was full of people – or was I just imagining? There were even other hikers and Sherpa that arrived there earlier. I ate even a delicious soup. The Dolphines had decided to camp 2 miles before the lodge since Poca was having stomach problems.

I washed my feet in the toilet sink and foun an epic campsite between Mt. Hood and the lodge. The starry sky above was just amazing.

How To Get Business Class Fares to Germany From the USA

Week 5/6: Hiking With and Without My Partner

5 of The Trek’s Most Viral TikToks of the Summer