Today I hike through a national park that I’d never heard of before embarking on the PCT. Lassen Volcanic National Park is a small park in northern California where the skyline is dominated by 10,457′ Lassen Peak, the southernmost volcano in the Cascades. Most of the PCT’s route through the park burned last year, but in a few places there are wooden boardwalks through green meadows and some unique volcanic features that feel more suited to Yellowstone than California.

The park requires bear cannisters for overnight camping, so almost all PCT hikers walk straight through in a day. I camp alone just north of the boundary on a hillside with burnt trees behind me and the golden valley spread out below. A deer comes sniffing around my tent twice overnight. Both times, I wake with a start. Surely the bears have learned where the hikers stop using cannisters. I sigh in relief when my headlamp shines on nearby hooves, not nearby paws, and I go back to sleep.

In the morning, it’s an easy cruise into Old Station, where I find Leaky outside the gas station. We eat ice cream sandwiches and chat until eventually we are joined by Wild Card and Stealth. Together, the four of us head back to trail but promptly detour again, this time up to the Subway Cave. This is one of my favorite side quests so far. The cave is the remnant of a volcanic lava tube. Aptly named, it is a horizontal tube a few meters below the surface of the earth. Outside, it’s above 90°, but in the cave, I add a layer to block the chill. We wander up and back again before rejoining the PCT. 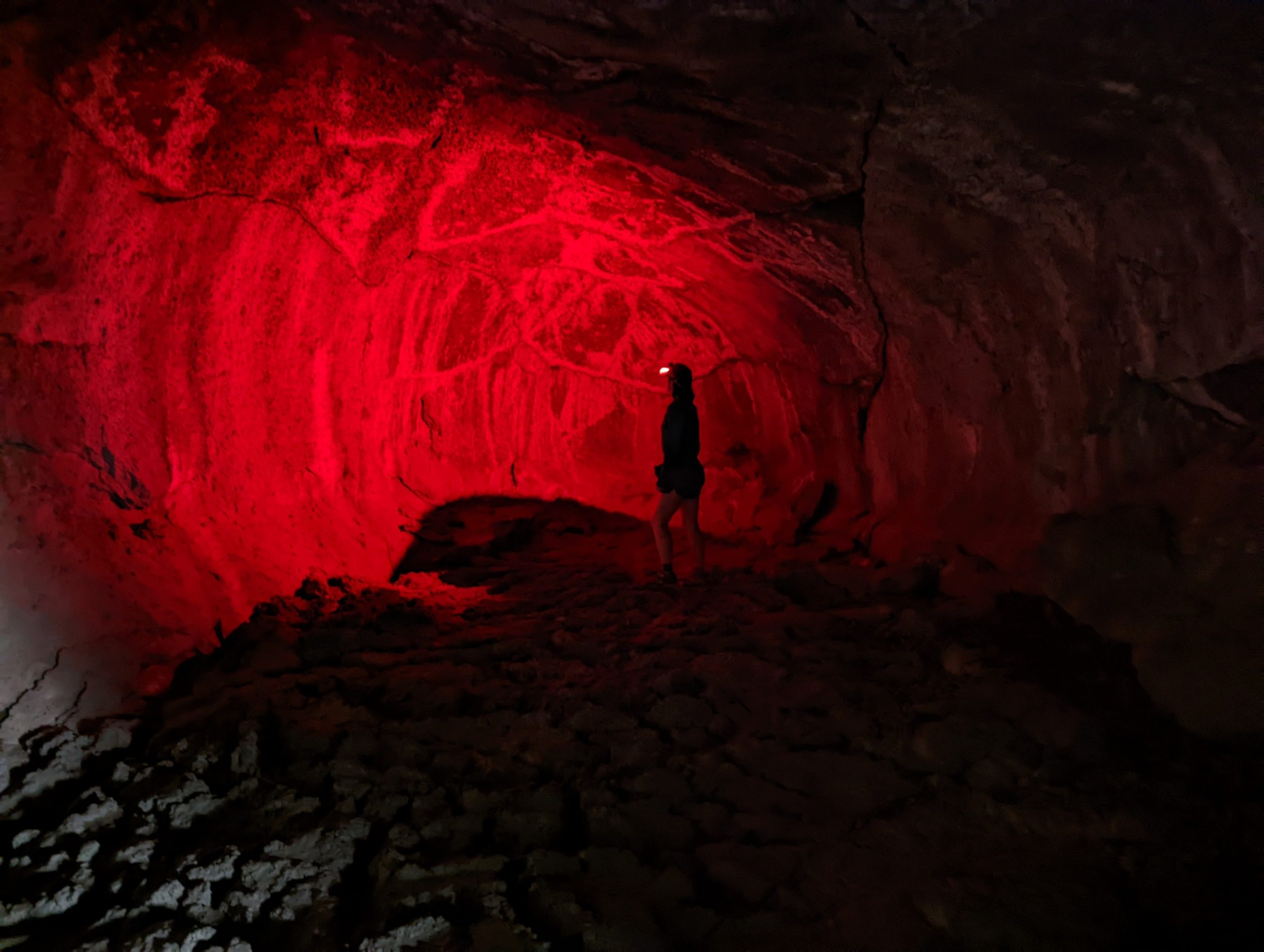 The next climb is a slog. It’s neither especially long nor especially steep, but it’s dry and exposed, and it’s so, so hot today. The cave already feels like a distant memory. At the top, we do get our first views of Mount Shasta in the distance. We will see it for the better part of two weeks, until smoke blurs the horizon and the McKinney fire chases us into Oregon (but that’s a future post). 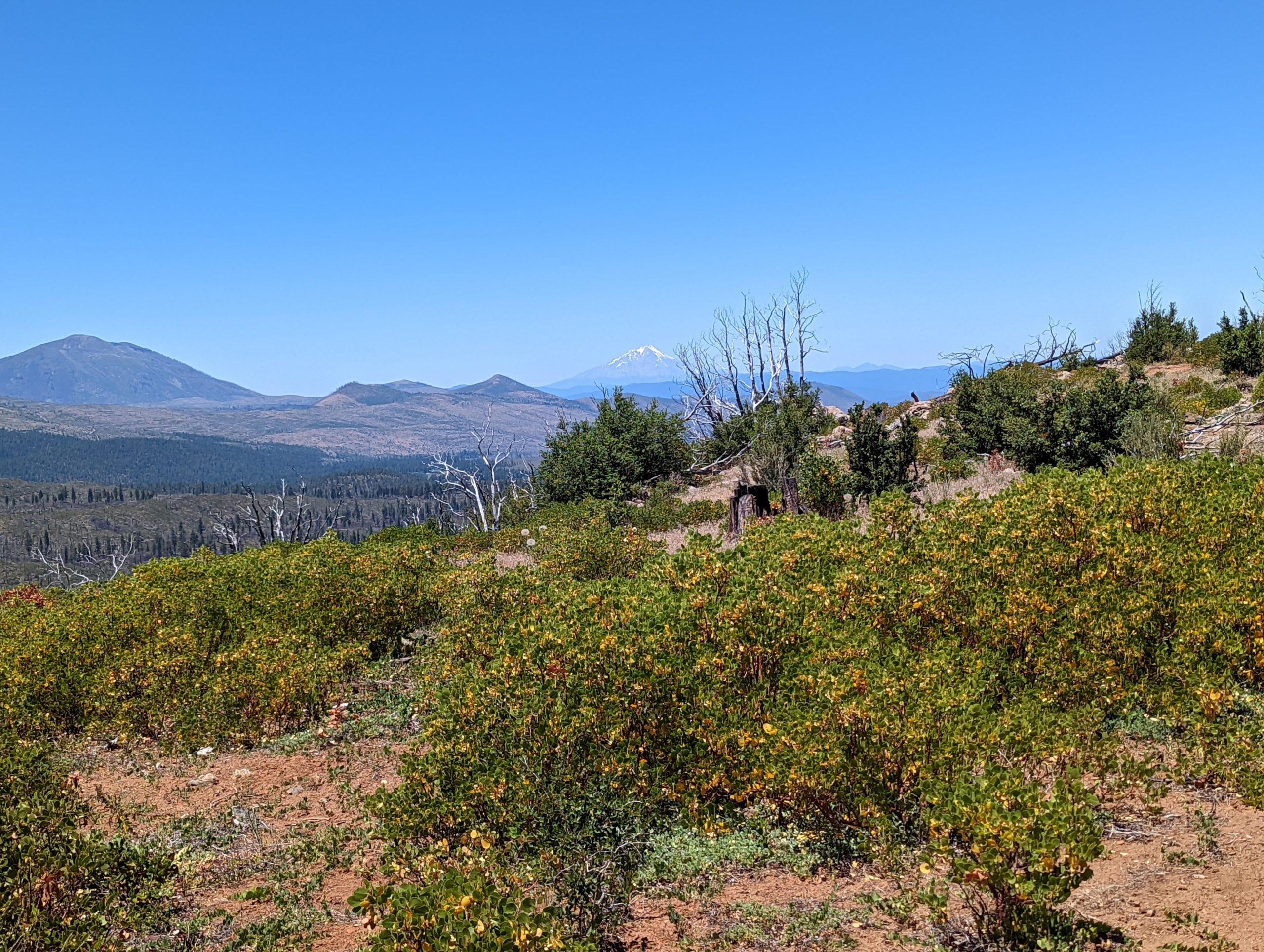 In the evening, we find a bubble of hikers at the water tank. We eat dinner and catch up with friends we haven’t seen in weeks, but the dozens of hikers camped nearby seem noisy. Leaky, Stealth, and I press on into the sunset to camp a little further. Wild Card is somewhere ahead of us. “The next campsite” turns into two more miles, and we finally find him at nearly ten p.m. Between our detours into Old Station and the lava cave, I’ve hiked my biggest day ever: 33 miles. I cowboy camp, too exhausted to pitch my tent. As I fall asleep, I count four shooting stars. My body is spent and ready for a zero, but I feel lucky to be out here.

Split a cheap motel with friends

The others leave town

But I decide to zero

here, not in Shasta

My motel in Burney offers a morning shuttle back to the trail. The terrain is flat, and it doesn’t take long to arrive at the offshoot to Burney Falls. 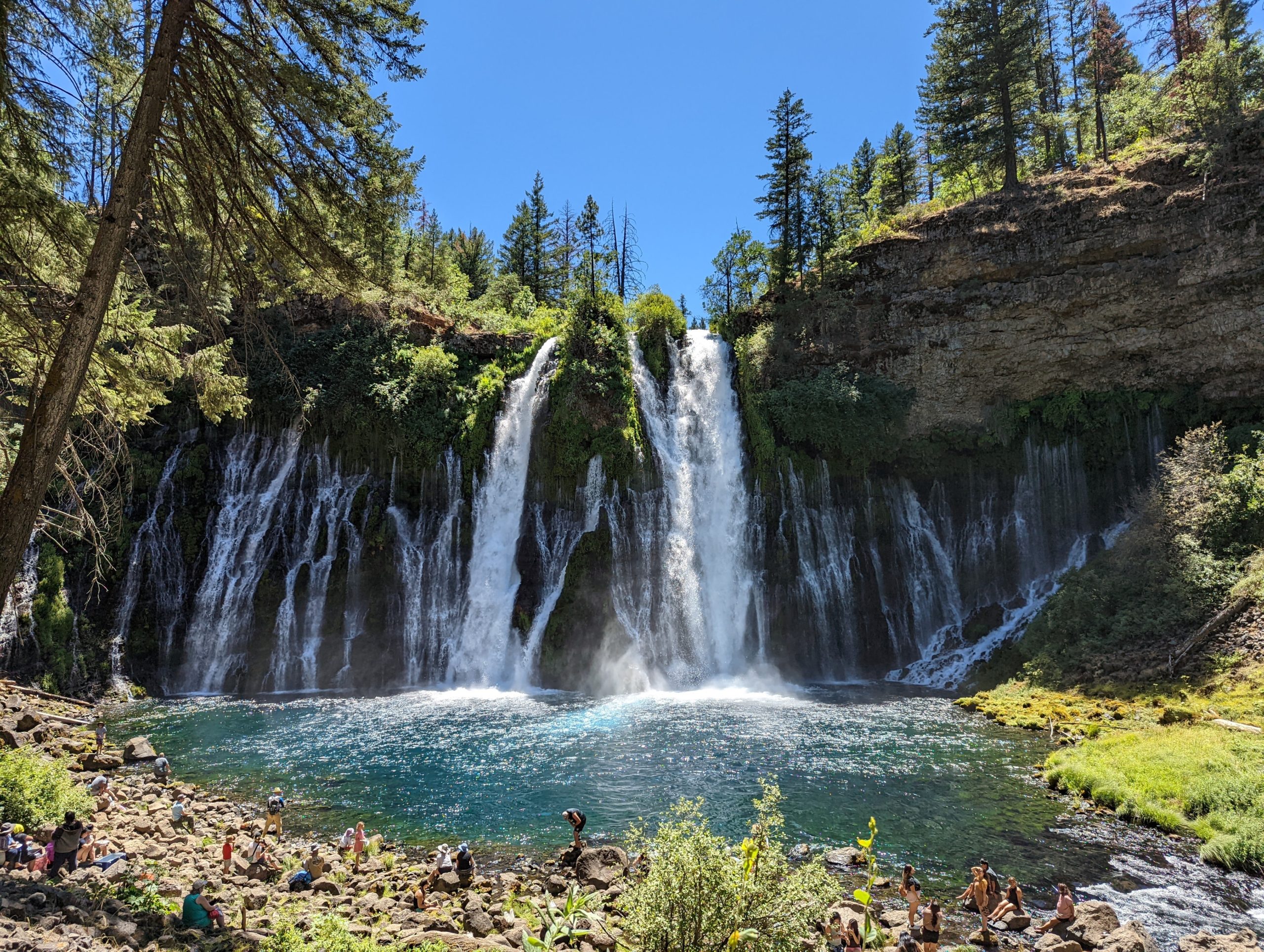 I hesitated to zero alone in Burney while Wild Card, Leaky, and Stealth continued on to Mount Shasta. I wasn’t sure if I wanted more time by myself so soon after finding friends again. But today, I have fun alone at the falls. It’s lunchtime, and I carry my Subway sandwich from town down the side trail to the captivating waterfall. The terrain approaching this area was so… normal. Nothing to suggest to the amateur eye that this bright turquoise cascade is just around a corner in the unremarkable NorCal woods. But its unexpected beauty has clearly made it a popular destination. Dozens of day hikers gather around the falls in swimsuits and flip flops. I wonder what they think when they see me with my threadbare multi-day pack.

When I get back to the gift shop, I order some soft serve. The lady hands me a bonafide skyscraper of ice cream balanced on the cone, and I sit outside eating it happily. I love hiking with friends, but it’s nice to have this leisurely detour on no timetable except my own. Today, the only reason I have to rush is my rapidly melting ice cream. 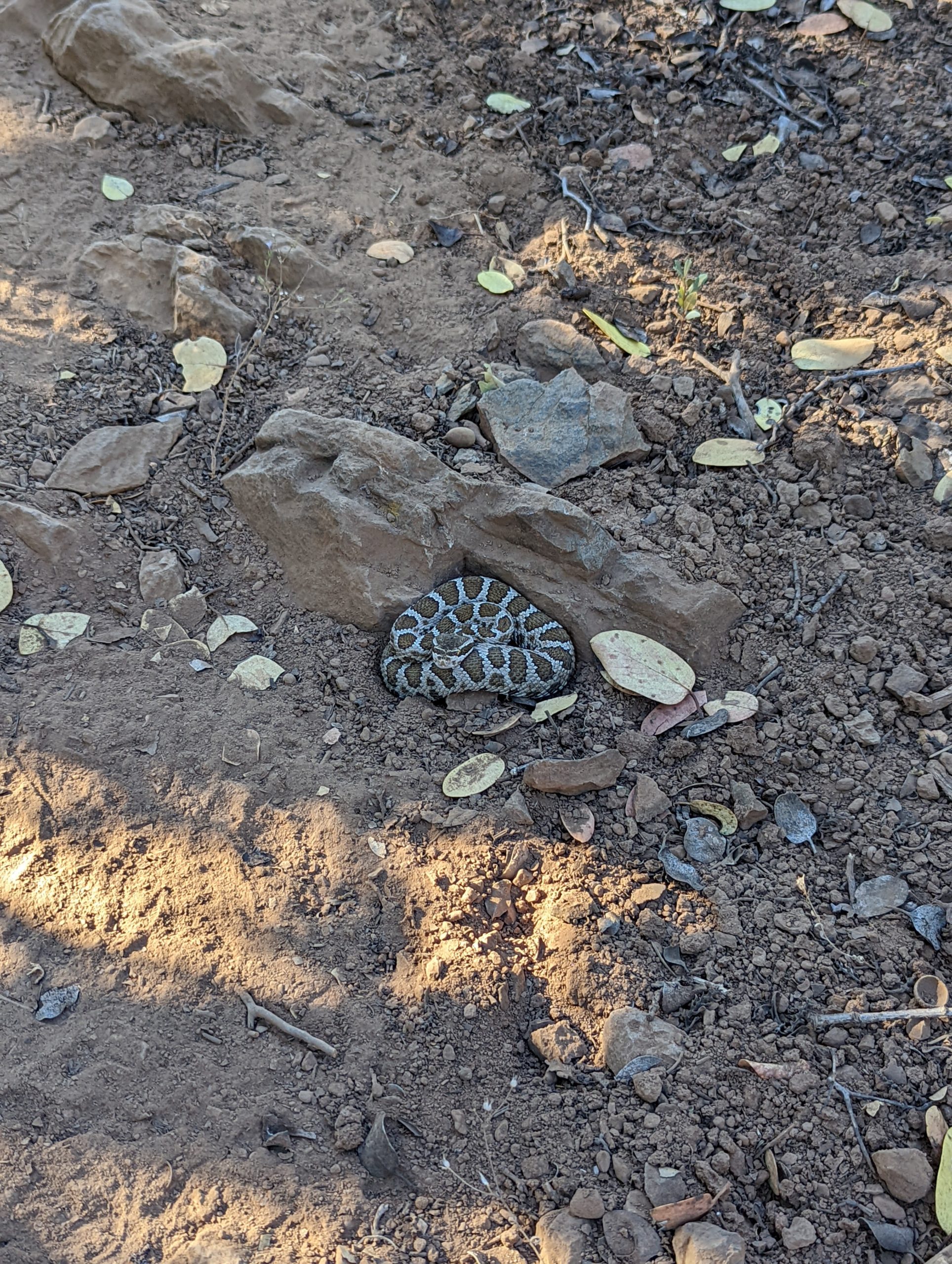 A baby rattlesnake I see later this evening

The woods in this part of northern California are as green as Appalachia. The pines are interspersed with deciduous trees, and the trail cuts through a dense green understory of saplings and bushes. It isn’t as flat as the miles leading into Burney, but it’s still gentle compared to most of what I’ve hiked so far.

Around 11 a.m., I am in shady woods when I hear something heavy go crashing through the brush to my right. I look up just in time to see an unmistakable fluffy brown rump disappear into the forest. A bear! My heart skips a beat and I stop in my tracks. I’ve finally seen a bear! My first sighting on the PCT and my first outside of Appalachia.

I keep hiking, jumpy at every noise and dark shape in the woods for the rest of the morning. After lunch, my energy level plummets, and my pace slows down. Somehow, despite the zero in Burney, the heat has left me feeling exhausted.

At nearly five p.m., my original goal campsite for the day seems out of reach, still ten miles away. When I’m filtering water at a creek, a lanky, sun-tanned German hiker pauses to say hello to me. I recall meeting him a few weeks ago but can’t think of his name. Unlike most of us who hike in long sleeve hiking shirts or sun hoodies, he’s notable for hiking in just shorts and a floppy wide-brimmed hat. He re-introduces himself as Smiley, and I remember him now. He was part of the big group of hikers I leapfrogged with between Kennedy Meadows North and Tahoe, back when I was sick with COVID.

“How much farther are you going tonight?” he asks.

“About five more, I think,” I reply. He hikes on ahead, but I see him again soon after, resting at a vista. The next time he catches up and I step aside to let him pass, he strikes up a conversation, and we hike together for a couple miles. I’ve barely spoken to anyone in two days, so it’s pleasant to have company. He asks why I’m hiking alone, and I explain how I lost my tramily when I had COVID, reunited with different friends near Quincy, and then lost those friends by zeroing in Burney. My experience seems to resonate with him, and he tells me a similar tale of friends repeatedly found and lost again. It’s reassuring to hear that someone else has shared the same doubts and social hurdles on trail thanks to the ever-present spirit of HYOH. 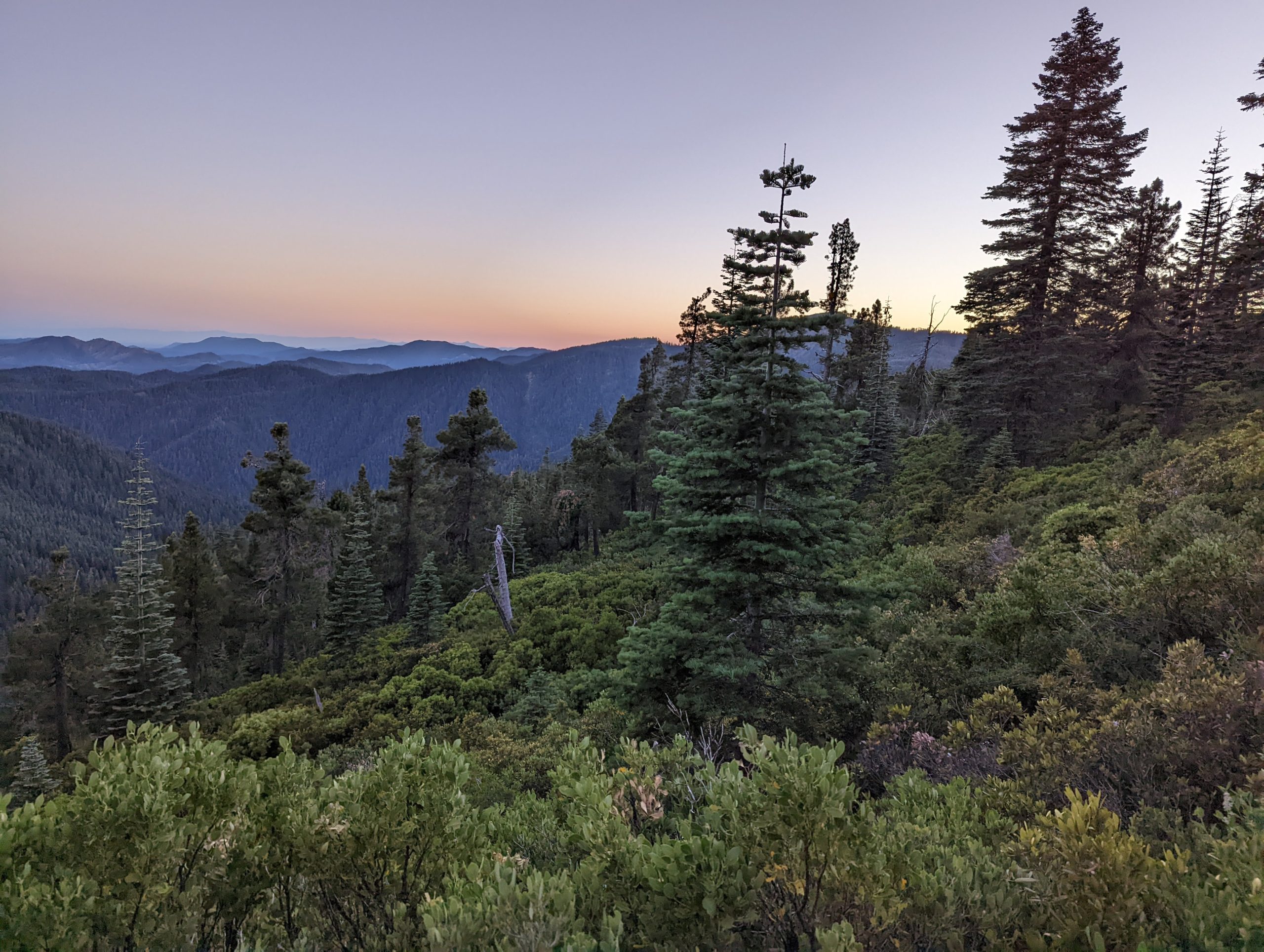 I ask where he intends to stop tonight. We realized we were camped at the same spot last night, and he is shooting for the same site I originally planned for, just shy of a 30-mile day. I had mostly given up on reaching it tonight after dragging throughout the afternoon, but now Smiley talks me into continuing with him. We hike on into the evening. From this ridge, we enjoy amazing views of Mount Shasta at sunset. We need our headlamps for the last mile, but we reach the campsite. The miles passed quickly with someone to talk to, so I’m glad I ran into Smiley again.

Solo Adventures Around the Mediterranean

Hiking in The Kackar Mountains

The Most Important Documents for International Travel