The AT straddles the state line between Tennessee and North Carolina in a high elevation section with open views.  Roan Highlands would be the highlight of the South so far for me!  Here’s the detail:

In my last blog post I went to sleep dreaming of an incredible breakfast, as Mountain Harbour Hostel is noted for this.  That morning they exceeded my expectations with an unbelievable spread of freshly prepared items.  The pictures tell the story way better than my words can: 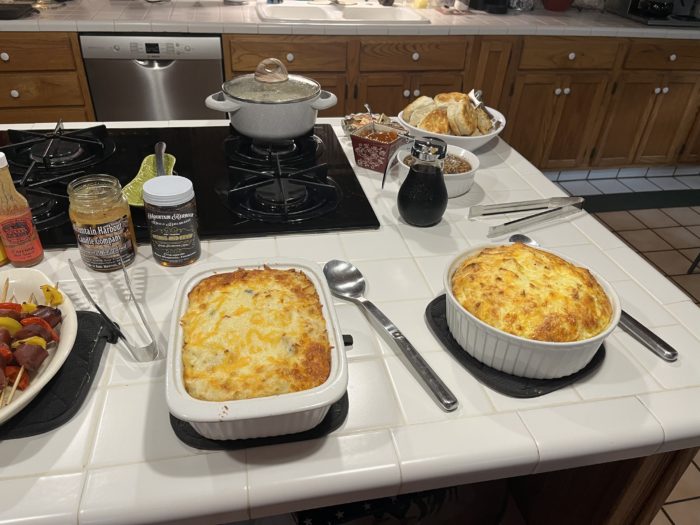 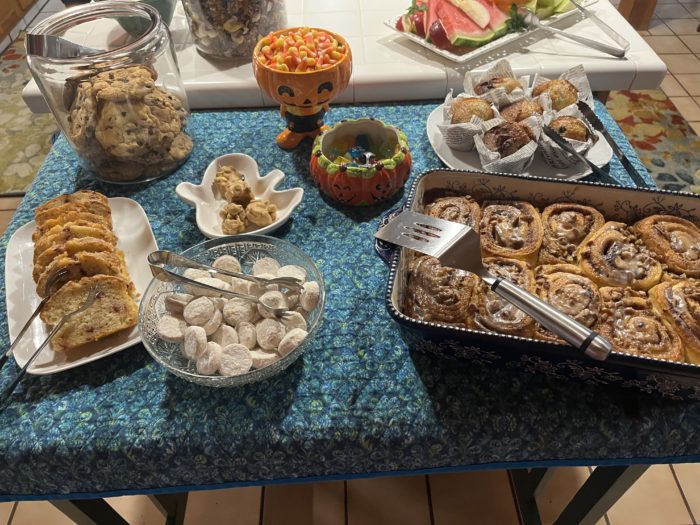 This huge breakfast offering was for just three people: myself and a young couple about to depart on a three day hike.  Sticks, the male, had hiked the AT a few years ago.  We had some nice conversation while I downed three full plates of food to calorie up!

Recognized on the big climb up

I’d need every bit of those calories for the morning climb on Day 132.  Hump Mountain stood at over 5500 feet, a 3000 foot vertical challenge from the hostel.

As I reached Doll Flats, one of the few level breaks on the way up I caught up with a SOBO section hiker with the trail name OMMA. (This stood for “Old Man, My Ass” he noted proudly!).  As I relayed my flip-flop hike progress he blurted out “Is your name Scott?”

”I’ve read a lot of your blog posts!”

And that was a milestone for me, being recognized by a hiker who had read my blog!  It was definitely the day’s MMM (Most Memorable Moment)!  OMMA and I each took a picture of our meeting: 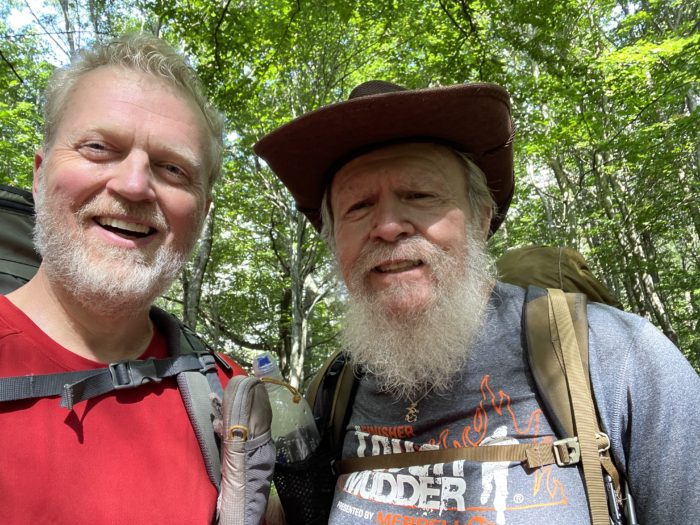 Amazingly enough, just two days later a second hiker named Thomas would also note that he’d read my blog posts!  I really enjoyed meeting these hiker-readers, it’s something I never anticipated when I began this blog.  And it’s great fun!

I soon emerged high on the ridge’s open grass, with wonderful 360 degree views. But as I scanned the distant mountains I also kept a wary eye on the gathering dark clouds nearby. Thunderstorms were predicted as early as 1 PM, and an open meadow on a ridge is no place to be during a storm.  I’d decided earlier to do just a 9 mile day due to the weather  – but now I wondered if I’d even get that done before the rain started.

Here are some photos capturing the sights from the open ridge at over 5000 feet: 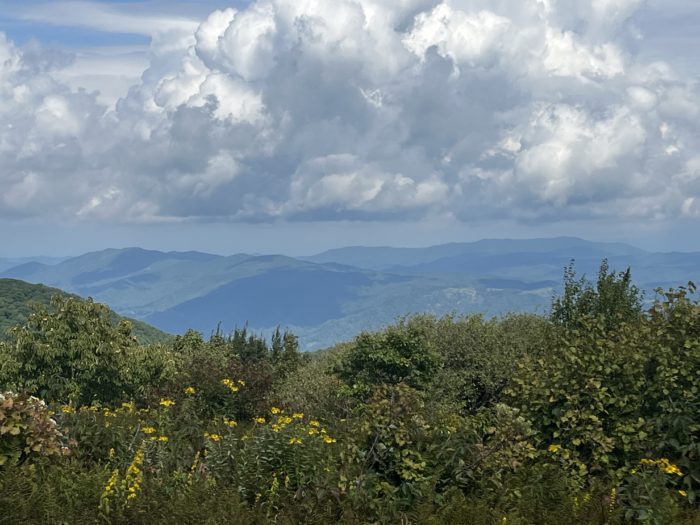 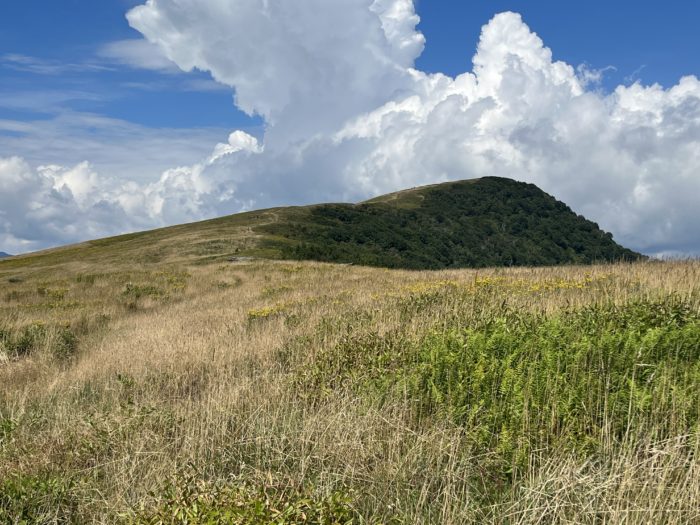 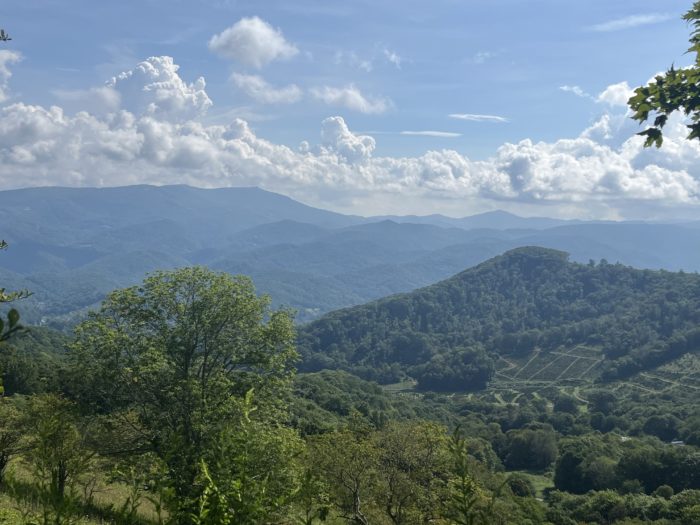 I’d run into a number of other hikers during this stretch, including “wrap around” flip-floppers Bubbles and Onions.  (A wrap around hiker starts their second leg in Georgia, going NOBO.)  I’d not met them in the North, but they noted that Maui – who I’d known in Vermont- was not far behind them.  After a lot of solitude on this leg, it was great to talk to some other flip-flop hikers still cranking miles!

I’d reach the historic red barn known as Overmountain Shelter at a really early 1:30 that day: 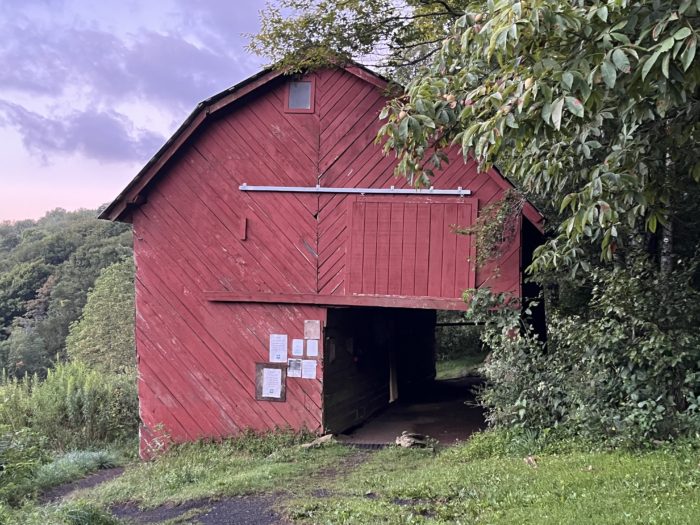 My excessive caution regarding the weather would prove justified when the skies opened up at 2:45 for a soaking two hour rain. I watched puddles form from under my hammock tarp because the old shelter was off-limits due to structural weakness. 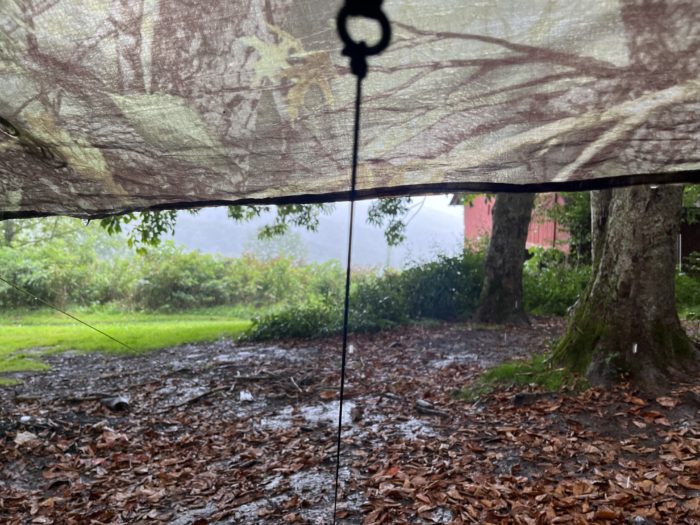 Weather clears for the heart of the Roan Highlands

Day 133 brought clearing skies, including a fabulous sunrise at Overmountain Shelter.  As I packed up my hammock I captured a bit of it in a sequence of photos: 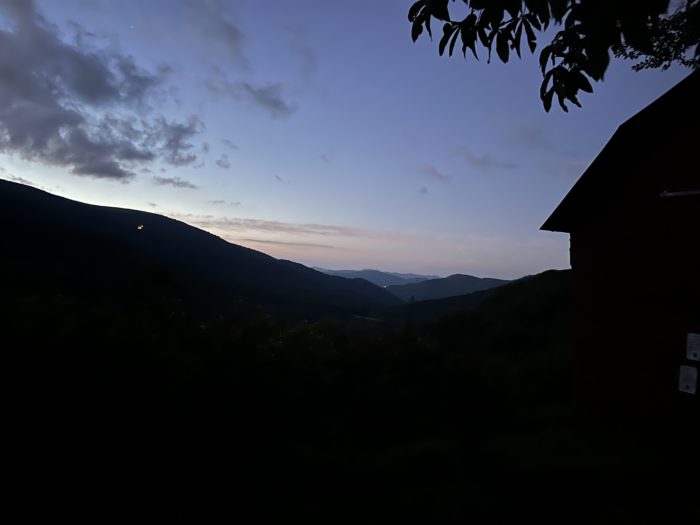 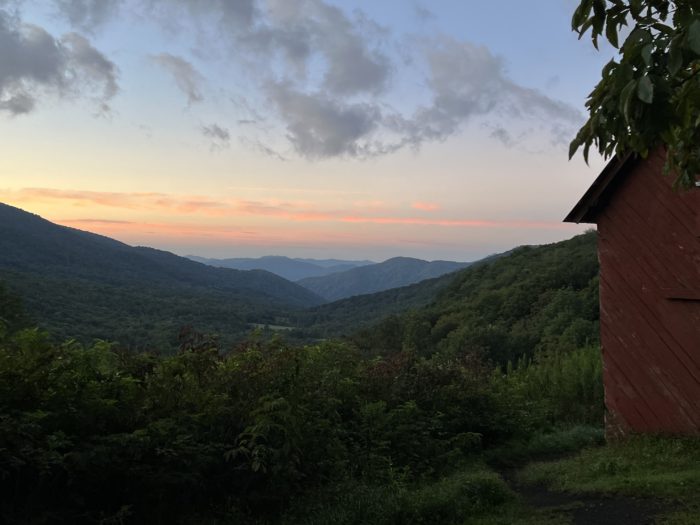 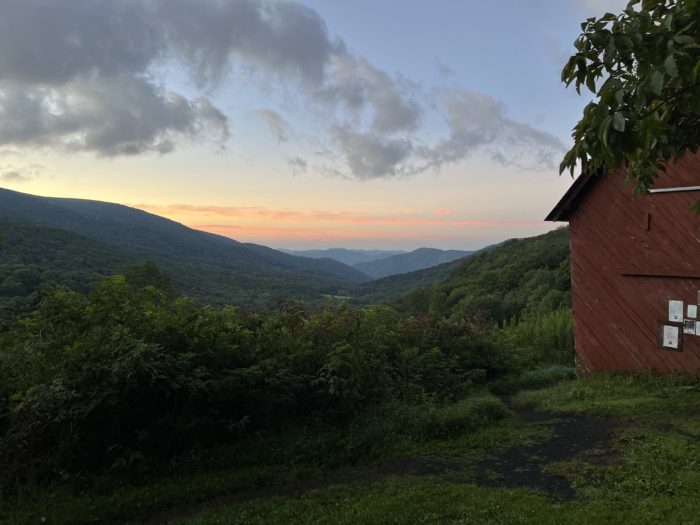 The clear skies were truly welcome, because I was about to cross open terrain in the 5500-6200 foot range.   After a short ascent I emerged on a sunny ridge cooled by a refreshing breeze.  Day hikers appeared around every trail corner.  I’d encounter more than twenty of them by 10 AM, all out enjoying the amazing views: 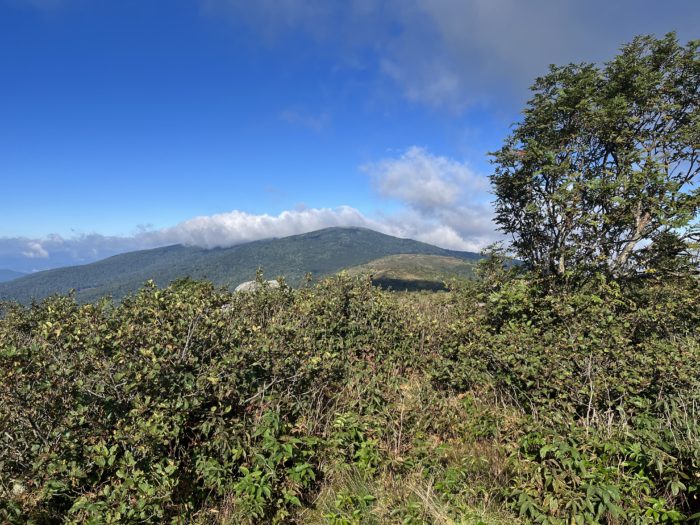 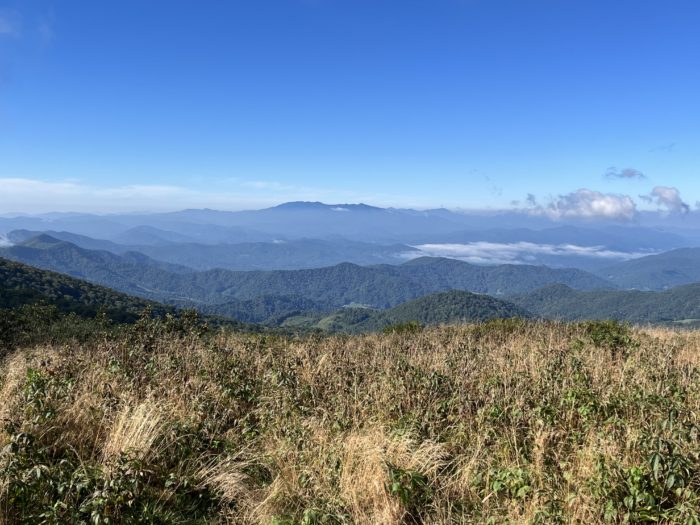 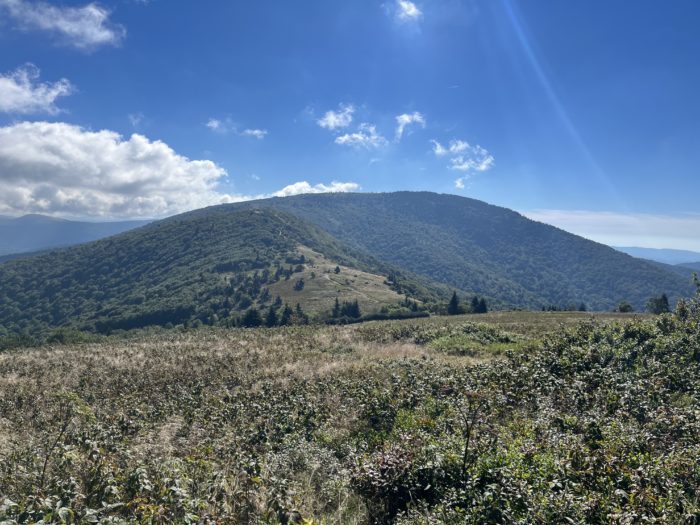 The Roan Highlands would not only be the MMM of Day 133, they’d also be my favorite trail section of the entire southern leg so far.  I reached the high elevation point of this area, Roan Mountain High Knob (elevation 6285), at midday so I lunched at the AT’s highest shelter.  Even though I didn’t reach a new AT elevation high (Mount Washington in NH is a mere 3 feet higher!), I was happy to be up at these heights: 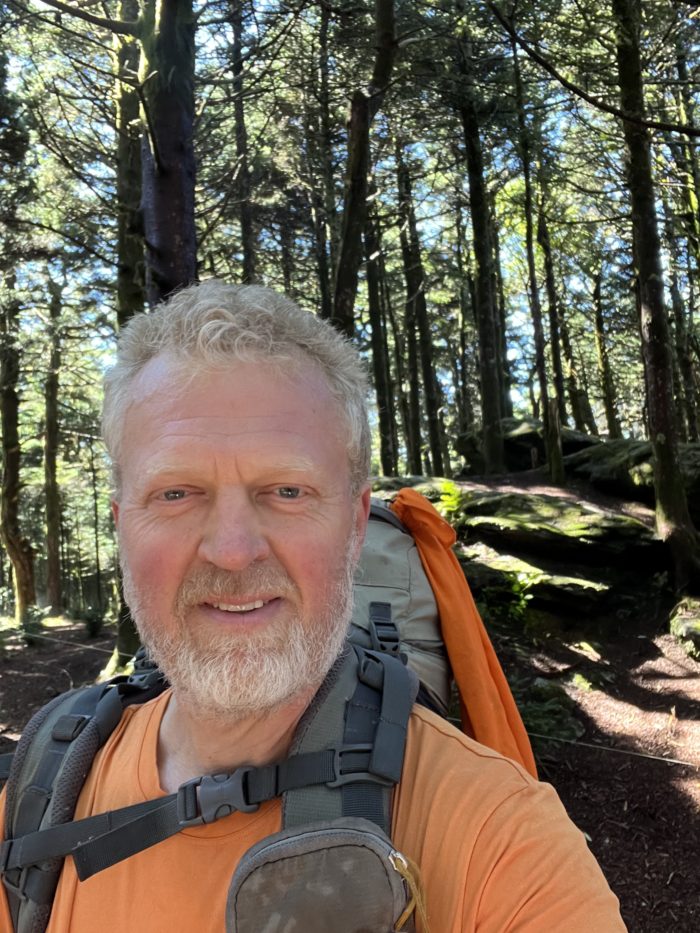 At a clearing further down the trail that day, I’d accidentally discover a marker noting the site of the grand old Cloudland Hotel, active from 1885 to 1910.  If you’re a history buff at all, check out the link above.  I love the story about the painted white line separating alcohol-permitting Tennessee from alcohol-prohibited North Carolina!

I’d turn in for the night at Clyde Smith Shelter, the site of a siege of tree-munching caterpillars!  After setting up my hammock at what seemed like a pleasant spot with a clear, cold pipe spring, these furry little creatures:

The last of these was a bit nerve wracking because I was going tarpless in my hammock, but kept waking and thinking “Are those raindrops?” (FYI, my mosquito netting was a 100% effective dropping shield!)

A big mileage day into town

I’d planned to do a 21 mile day on Day 134 to get me just a few miles away from Erwin, Tennessee.  But I started the day in a great rhythm across gentle terrain, and began believing that I could finish the whole 25 miles.

In fact, I ripped off the first six miles in two hours flat, and did the twelve miles to the top of Unaka Mountain in a blazing 4 hours and 15 minutes.  Do you see how the prospect of town food and beer turns me into Superhiker?

I did not expect that day to have any “special” trail sights – but boy, was I ever wrong there!  The summit of Unaka was one of the most beautiful and unique mountaintops I’ve ever seen – green and mossy with a flat, dense hemlock stand.  It was cool, quiet, and lovely: 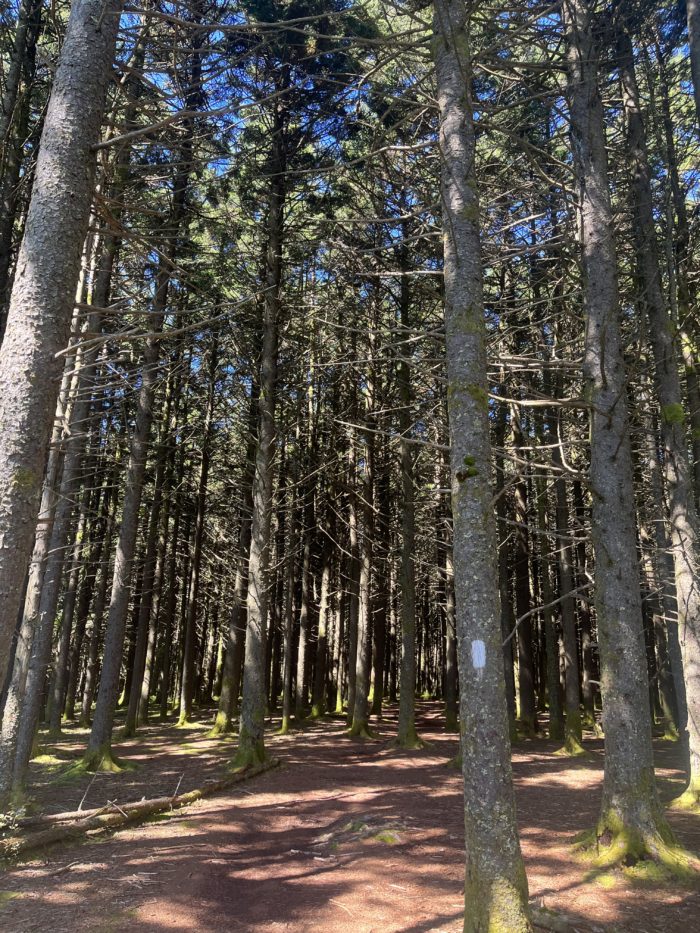 My MMM for the day showed up several miles later at a place called Beauty Spot.  The open mountain meadow featured stunning 360 degree views.  Here are a couple of hikers, dad Freebird and daughter Ivy, taking them in: 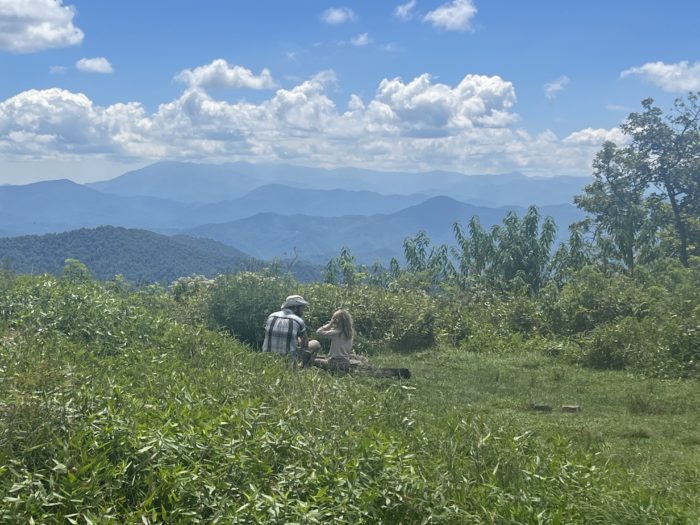 I’d complete this 25 mile marathon day in a mere 9 1/2 hours!  At the bottom I’d get a ride from Steve of Unicoi Shuttles, who was incredibly cordial and welcoming – even giving me a mini-tour of the town of Erwin on the way to my lodgings!

I stayed at a motel in Erwin rather than Uncle Johnny’s hostel near the trail for two reasons:

The Super 8 was not ideal – overpriced and skimpy accommodations- in fact the washing machine I desperately needed was broken. But it did allow me to walk in and out of town.

So after a morning walk to the town laundromat (grrr…) and the food store I enjoyed the library, the Steel Rails Coffee House for lunch, and the Union Street Taproom for beer when it opened at 5pm. 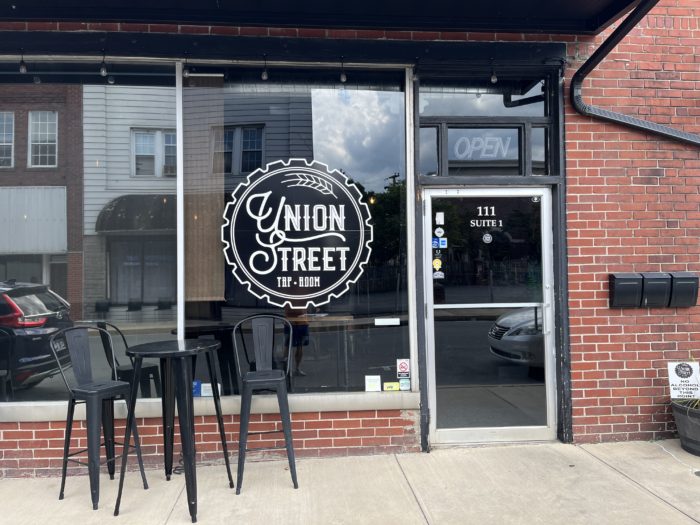 Since it was also a special “First Friday” music night, a few food trucks were available.  I got a couple of entrees to go with my beer.  That’s a meatball sub and a loaded nachos with chicken. Yummmm! 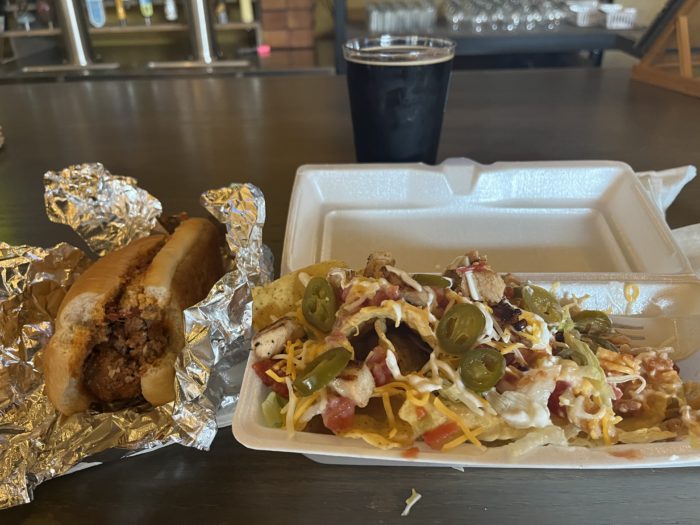 As for the beer:

All in all, a nice day in a nice little town, which if you read the sign below, got permanently misnamed due to a US Post Office error: 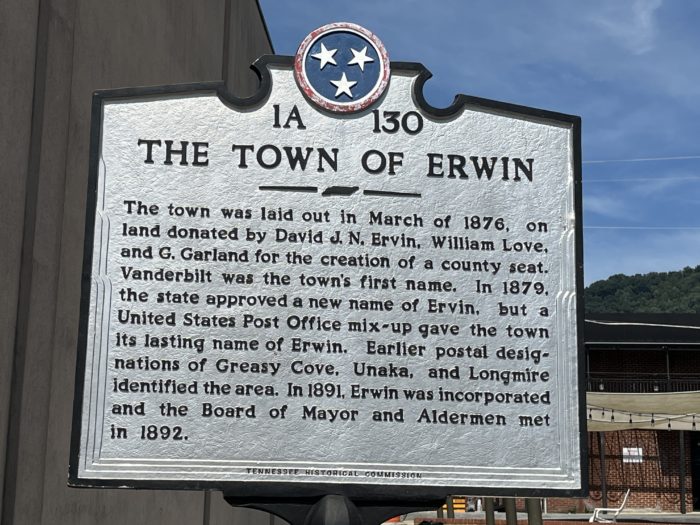 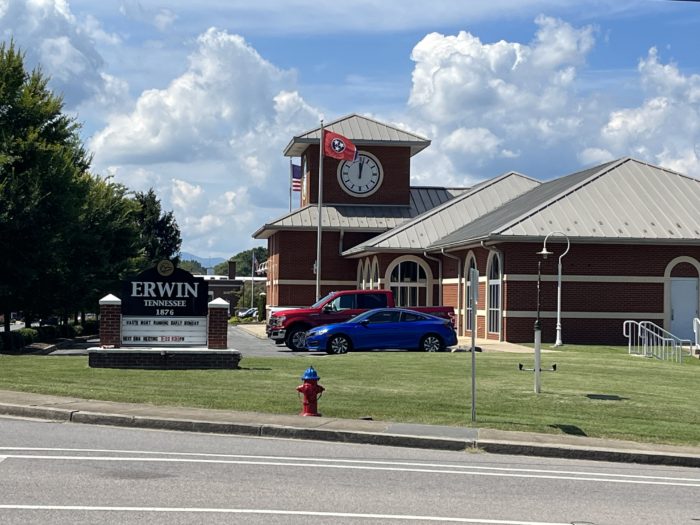 If you couldn’t tell, I absolutely loved this AT segment.   And after my restful zero day in Erwin, I was excited to see more of Tennessee. 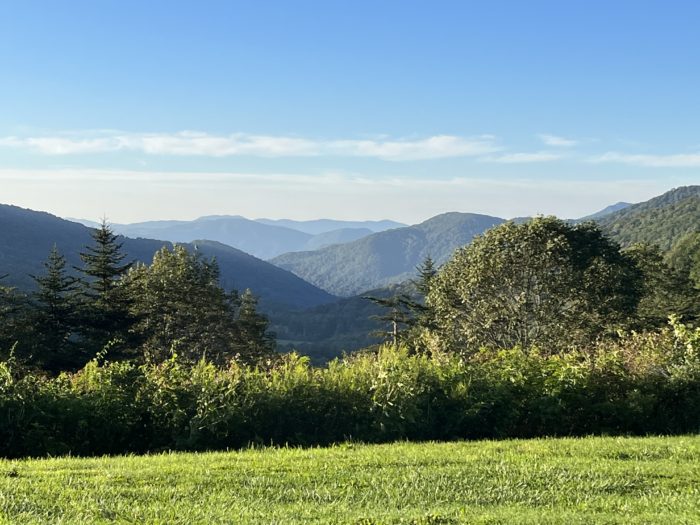 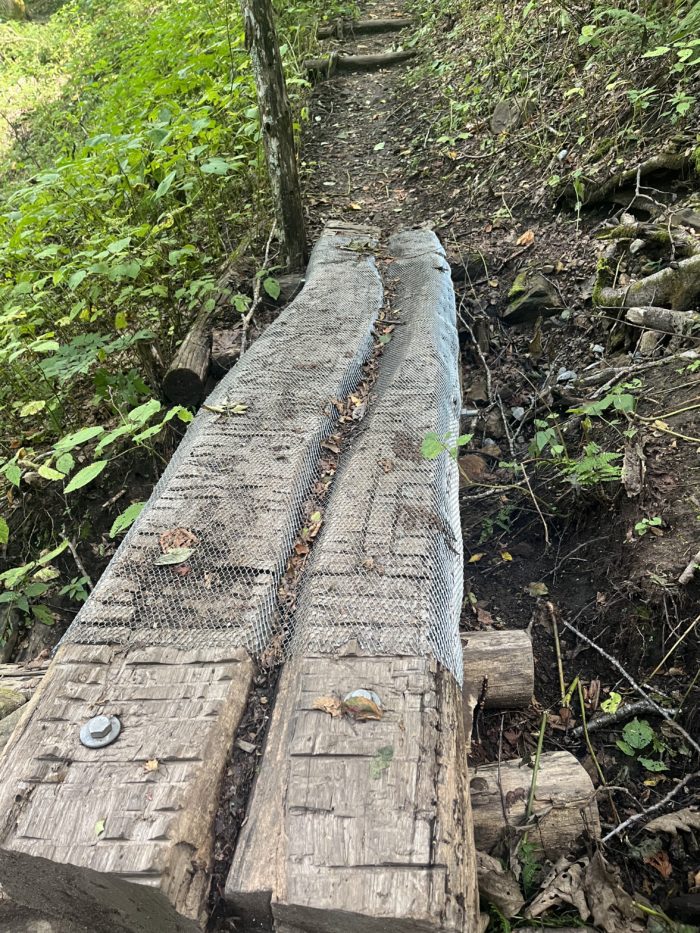 Bears and Tears - The Trek