I woke up automatically by the sunrise and went to a breakfast at the local bakery. Some man was wondering that there were no longer PCT hikers around. I said yes there are. People don’t always recognize me as a hiker because I don’t wear the typical thru-hikers shorts uniform.

I did the usual townday chores: resupply, send a package to the Sierras, could not send to KM North since there was no UPS point in the town. I did a laundry in a laundromat that had the most illogical card system. I had to change to my rain coat and windpants in the middle of the laundromat since there were no toilets anywhere. I went to the Dollar Store in the heat of the day in my raincoat and was sweatting gallons. It was hard to find resupply with the limited selection so the next resupply would be more knorrsides and mash potato that I hate already. The outdoor store had some dried meals that are more nutritious but expensive.

After I realized it would be over 100 F again I gave up the idea of hitchiking out that day. I felt also very tired. At the same time Skratch wrote she and Calculator would be coming in that day so it would be nice to meet up with them.

I went to take a shower in the citypark where I had slept and saw a guy sleeping under a tree. It took a while to realize it was Croc! He had injured his leg and got a ride from Seiad Valley. So his continuous path had been breaken too. Also Sidequest and Safety Inspector walked in, they had done an insane 40 mile walk with 11 000 feet elevation gain and were going to continue walking that evening. Some people have almost limitless hiking capacity. They also like to sleep in and hike in the middle of the night which I don’t like at all.

Skratch and Calculator went directly to a brewery and I joined them. They had done three 30 mile days and were still pursuing to hike every mile of the PCT. I had decided to skip the next section since there was a wildfire next to it and some hikers said it is less scenic than the sections closer to the Sierras. I want to enjoy the trail which I wouldn’t do if I tried to hike two weeks with an average of 30 miles a day, my body would likely just stop working in one way or another. Doing 24-26 mile days is challenging enough for me and seeing the Sierras is my priority.

We went to the other brewery and there was a live band playing. We ordered beer sample plates and it was really enjoyable. I find it equally important of enjoying the trail towns and culture as it is to try to hike as much of the trail as I can in 4,5 months. 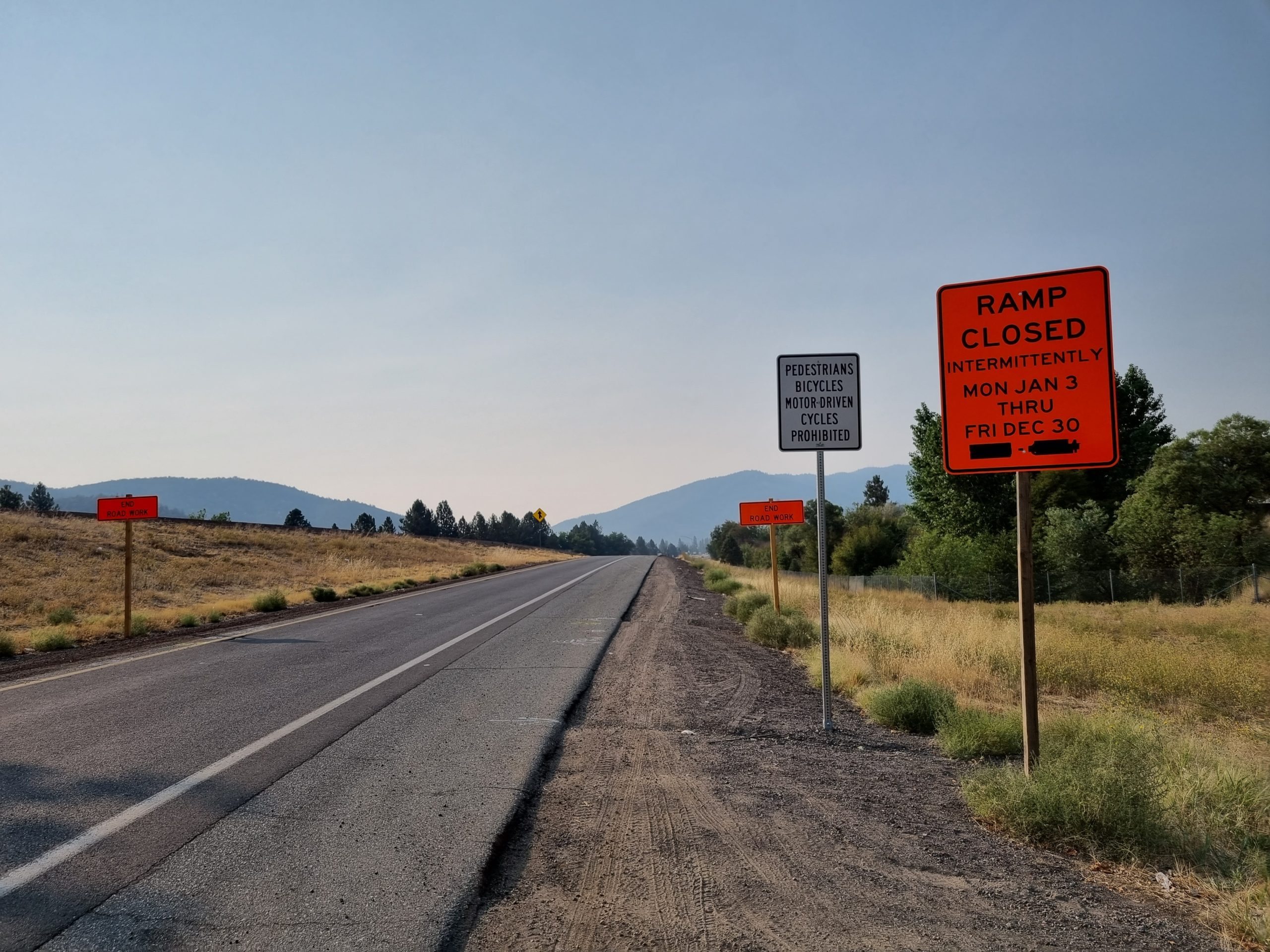 I was still awake at 10 p.m. when it suddenly started pouring water on my tent. The sprinkles had gone on and were just spraying inside my tent that had the doors open. I had to escape the tent and I tried to cowboycamp in front of the bathroom doors. It was too light there and I heard that the sprinklers were moving so I went back to the tent and tried to dry the floor with a bandana I had found earlier in a hikerbox. It was surely real midnight before I could sleep.

I woke up after six anyway and had a breakfast by the picnic tables. I reorganized my hygiene pack that had gotten wet and all my painkillers were a smash in it so I just had to throw them away.

I said bye to Croc who had also slept in the park and went to hitchike by the road. The first car to stop was a man with a pickup truck and a dog that had worked with the forest maintenance. The second car was another pickup truck man that owned land in the area and had given rides to a lot of hitchikers.

In Yreka it was hard to get a ride. There were a lot of fireforces going to work with the firest fires near Weed. After one hour or so I had a ride from a woman who had been working at a casino the whole night and who was telling stories about how she was in a plane that had an engine cut off and how she found rescue in praying. She also told about praying to archangel Michael when somebody attempted to rape her and how she had a special meditation to clear the smog in Los Angeles.

From Weed I got a drive by a woman who also liked to hike the PCT. Her husband was a firefighter who had to destroy a part ot the trail in the previous years fires and who had been feeling guilty about that.

I started the hike around 11 and it got hot again. There was no smoke smell but the smoke still blocked the views to Mt. Shasta. All in all the hike was a bit boring but relatively easy. Half of the day I was walking uphill and half dow hill. I was not sure if I could even walk 10 miles in the afternoon but in the evening there was downhill and it got cooler so I was halfrunning the last 6 miles. The biggest problem were the black gnats that were getting in my face and so I had to wear the mosquitonet although it was brutally hot already without it. The whole day I met zero other hikers.

I camped by a creek that had a lot of praise in FarOut app and it was surely a nice place where you could wash yourself in the stream. Every comment in the app on this stretch mentions bear sightings so it is not unlikely one will meet some on the trail… 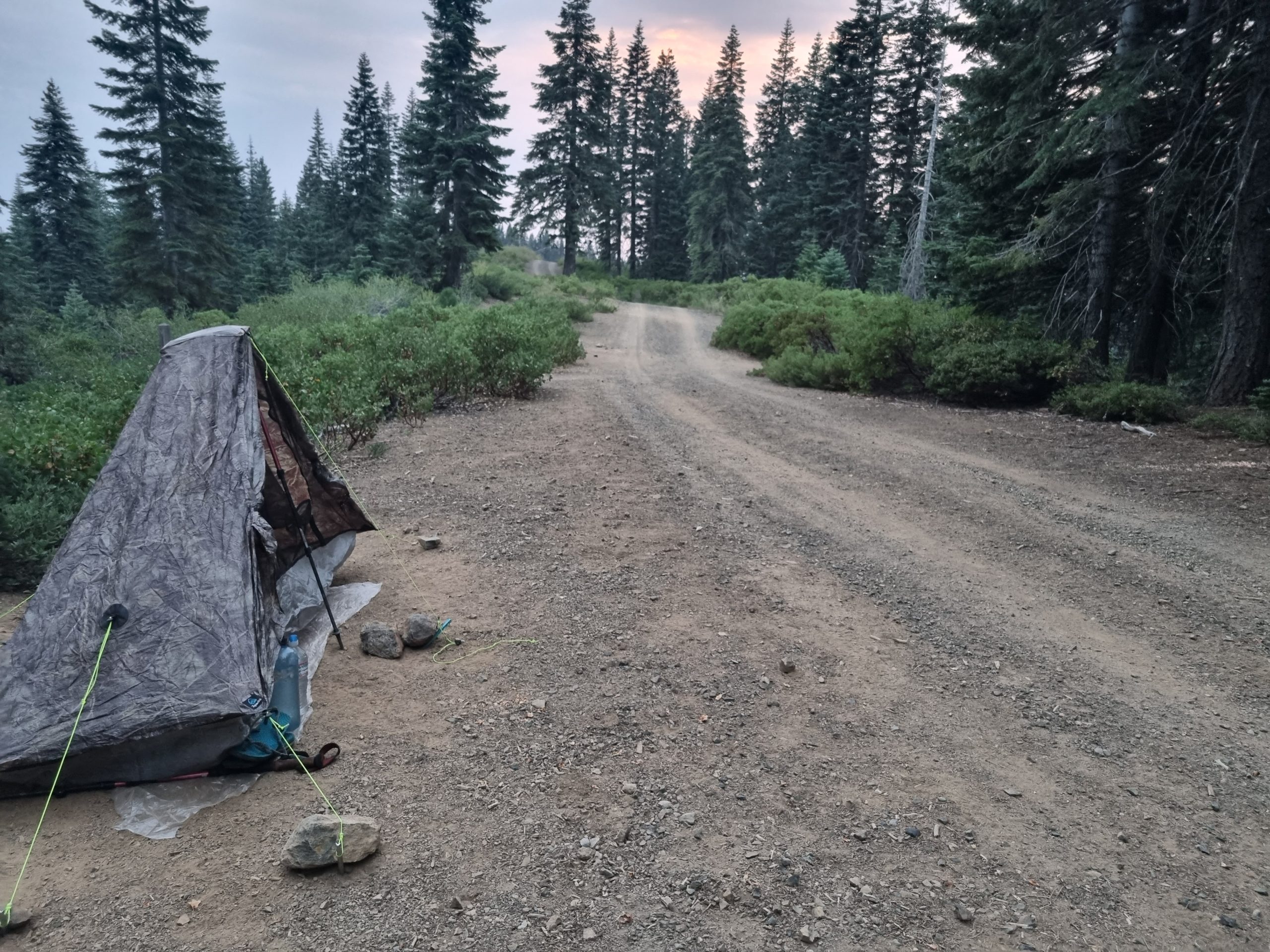 I was woken up at 4 by the bright moon and tried to fall asleep for another hour. I packed up and started walking in the mystical moonlight. It was strong but not strong enough to walk without a headlamp.

I was listening to This American Life and Backpacker Radio to get some psychological stimulance. I heard an episode of a family of five kids that were thru-hiking as a break from their life in Chad. Their hike surely sounded hard compared to mine! I also heard an interesting episode with a drag queen hiker Patty Gonia.

I finished the climbing just before half past seven, that is when the sun goes down. I have become quite good in estimating the time it takes for me to hike.

I camped by a sloppy dirtroad that had a possibility of crazy deer coming in at night. The owls were having a party at night but no deer visited my tent. 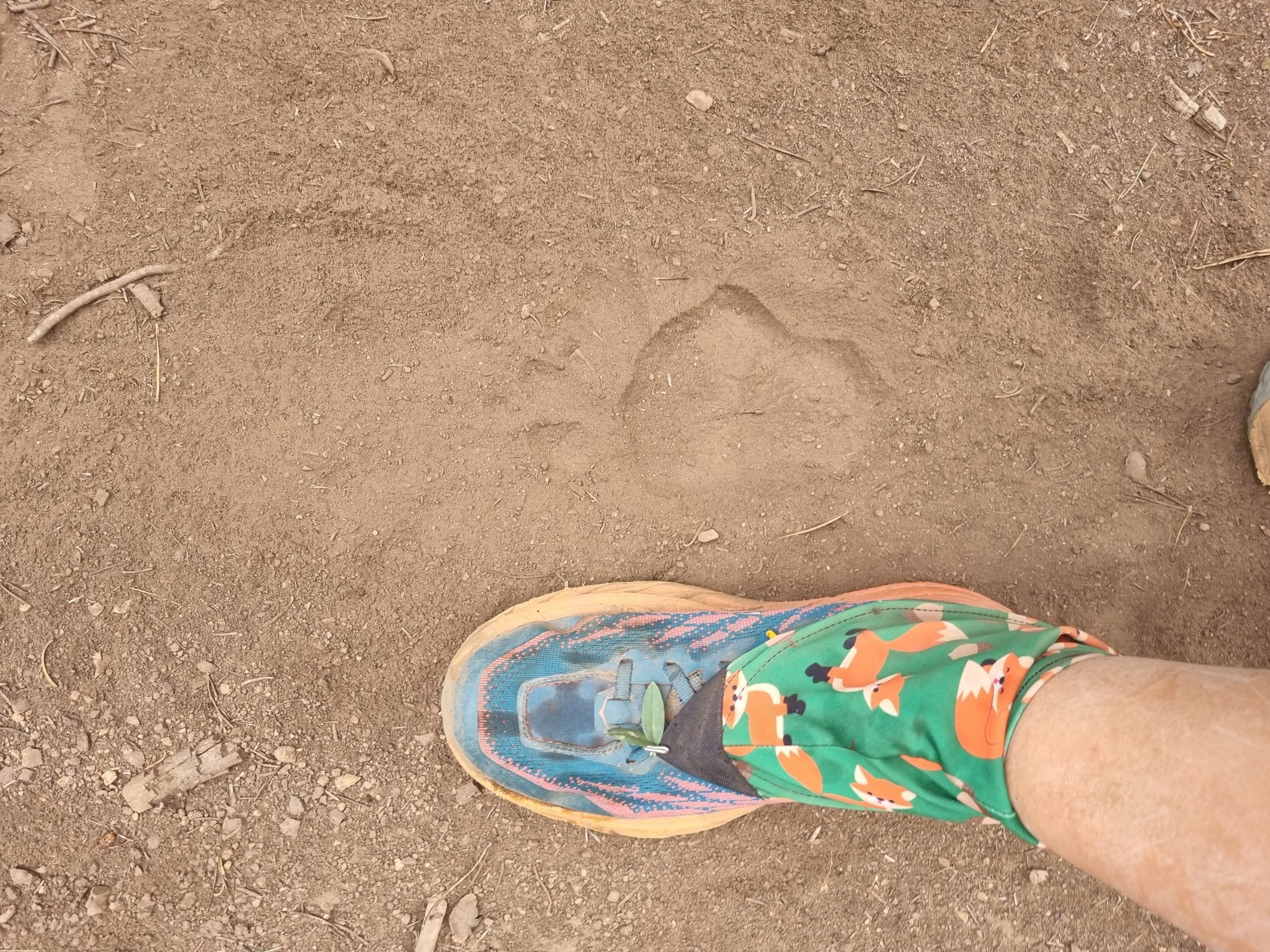 I woke up at 02.30 when it started to rain. So unusual! I had to close the tent doors since the tent was on a backwards leaning slope. I couldn’t fall asleep before an hour before my alarm went off. Again 15 minutes later than I had set it, very strange.

I started hiking and went to a stream that was not flowing. The sun went up and I had to walk to another stream a long way. It was almost dry too, so I could only get one cup of water for my coffee. I was out of energy and stressed about the water. The next one was in a few miles and it was a long way of bushwacking to the stream. Either I never found it or it had dried. I had to walk seven miles more until I finally got to a stream that was working. I swore I would always carry two liters from now on.

I heard some crazy noise, like a rockslide. I realized it is a big animal and must be a bear running down. Just in another mile I heard another one. I kept on listening to my podcasts on a high volume to make them aware of that I was coming.

There was a breeze so there were no bugs. Heavenly! There was also less climbing than the previous days.

I reached a camp by seven and went to filter more water. I saw more fresh bear prints coming from the well but that is difficult to avoid in this section.

When I was already in my tent I saw a headlamp and somebody was asking: “Whiskey?” It was Fish who had been doing 30 – 40 mile days and already caught up with me despite me skipping 90 miles. As Fish was talking I saw a lightning over the whole sky behind him, althoug without any sound. Fish camped also at the same site. 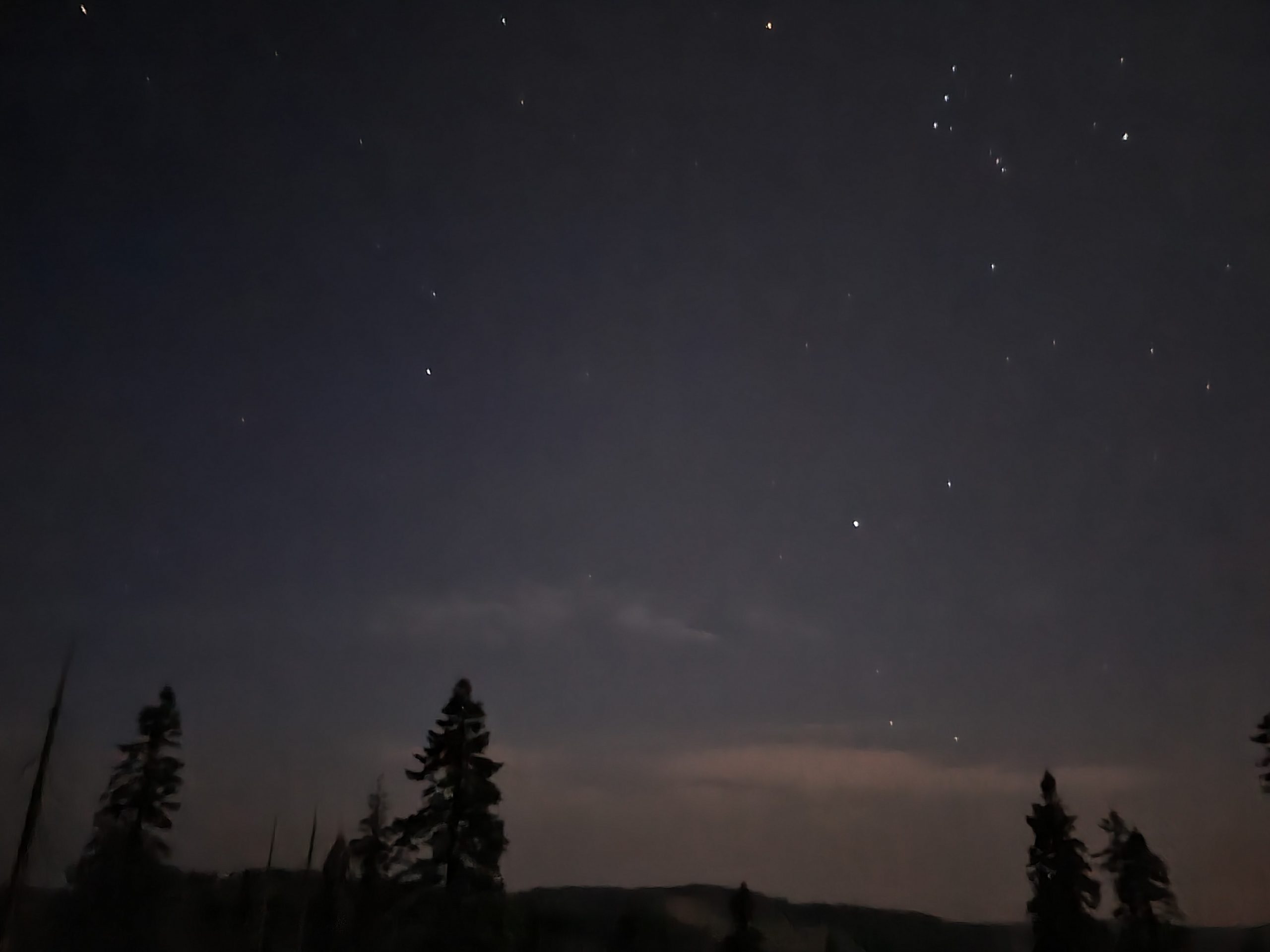 Since Fish was going start hiking at 5 I thought I might do the same. I got up at 04.35 and by 5 I was hiking. It was quite chilly and I wondered how cold the mornings would be in the Sierras. Soon Fish caught up with me and had apparently seen a bear right before me. I was listening to weird musical opera that would scare away all but the most sophisticated highculture loving bears.

The trail was pretty easy and I did my first 10 miles by 10 o’clock despite stopping for a half an hour breakfast. Since I didn’t have more propper food I kept on going all the way to Burney Falls that was 18 miles from the start before lunch. I saw some cool hawks on the sky.

I went to see the falls and craving for soft ice to the tiny general store that didn’t have any soft ice. I bought an egg sandwich, an ice cream and a coffee that were all overprized. The landscape looked more like desert with ecotic plants an plenty of lizzards. It got bloody hot in the afternoon too.

I was pretty exhausted in the end when I arrived to the road, mainly mentally bored from hiking alone. I had seen one of the last NoBos but not other hikers. I got a couple of hitches 7 miles down to Burney and went to a Mexican place. Fish was sleeping by a church that hosts PCT hikers and when he heard about margaritas in the place he arrived there just in time to grab one before they closed for the day.

The church is a spooky place where hikers are sleeping at a gym hall. I found a remote spooky room upstairs to sleep in. We chatted with Nine Beers from Czech and I drank my emergency whiskey despite the anti-alcohol rule of the church.

Hiking in The Kackar Mountains

A Short Guide to Hiking the Colorado Trail — CleverHiker

How To Wash Your Sleeping Bag