To Canada, whatever it takes (Part 2)

So I left you right where we left the PCT: hitching west from Rainy Pass to Ross Lake. We were on our way to pick up kayaks so that we could paddle the last 22 miles north to the Canadian border. Although we were excited about this, we were also nervous. We knew there were fires around the lake, the smoke was terrible that day, and we were a little worried that something would go wrong and we wouldn’t be allowed to do this. “I just want to be in a kayak,” I kept saying. “Once we’re in the kayaks, everything will be fine.”

Two of our group hitched first, because they were going all the way to Marblemount to pick up our backcountry permit, whilst the other four of us got the next hitch down to the lake. It was surprisingly easy to get a ride, and we were at the resort before midday. As we started the paperwork, we spoke to one of the employees and she told us that our plan to get to the Canadian border and back in two and a half days was ambitious.

We asked around, talking to a few other employees hoping for a better answer, but they all said the same: getting to Canada and back takes four to six days. We couldn’t extend the kayaks for another day and the only other option would be to pay a considerable amount of money for a water taxi back. That was out of the question. We waited for the rest of our group to arrive with the permit, and they did, along with the news that the ranger had also told them our plan was very ambitious. We didn’t have a choice though, we had to try.

The woman at the resort told us just before we left that if we were normal people she wouldn’t even let us take the kayaks. But that was just it: at this point we were not normal people. We were people who had sacrificed everything to spend the last four months of our lives walking to Canada. And despite the sheer ridiculousness and insanity of the task, we were here, just 22 miles away from the border. So we weren’t going to let a woman we had just met stop us from trying.

As we packed our belongings into the kayaks, the mood was akin to a family trying to leave on a holiday. We were all tense and short-tempered, snapping at each other. “Are you guys taking your tents?” someone asked. We all agreed that it wasn’t going to rain, so what was the point? We always cowboy camped anyway. We threw our tents in the office of the resort and left them there.

We finally got paddling around 2pm. It was very smokey as we left, but I felt relieved to be on our way. We didn’t know anything about kayaking. We hadn’t used our arm muscles in months. We had been told by everyone that we wouldn’t make it to Canada in time. But we left anyway.

The smoke on Ross Lake as we left the resort

Three hours later, we made it to our intended camp, 11 miles up the lake. It was 5pm. I hadn’t arrived at camp that early in months. We all immediately jumped in the lake for a swim, feeling happy and smug. If we could kayak 11 miles in three hours, we had nothing to worry about. We were going to make it.

The smoke had cleared somewhat too, making everything feel just that little bit less apocalyptic. But as we set up our beds and started making dinner we realised that we had made a grave mistake: there were mosquitoes everywhere. We hadn’t encountered bad mosquitoes for a few weeks now, so no one had even thought that might be an issue, but there were hoards of them. And not a single one of us had a tent we could hide in.

We donned out raincoats to try and protect ourselves, then as soon as we’d finished eating we retreated to our beds. I hid in my sleeping bag, trying to keep them out, but it was too hot to stay completely in. When I brought my head out, they landed on my face and bit me, or buzzed in my ears. We all agreed that if someone wanted to come up with a new way of torturing people, all they needed was a lot of mosquitoes.

Despite the lack of sleep, we were in good moods the next morning: the smoke had pretty much cleared and we were only 11 miles of paddling away from Canada. We couldn’t contain our excitement, as we started kayaking we kept screaming at the top of our lungs, “CANADA!!!” It was like some kind of weird turrets, the word came bursting out of our mouths at regular intervals and we would all whoop and cheer in response to whoever had screamed it. The kayaking itself felt better too: I was finding that I could zone out like I did whilst hiking and, where the day before I had been lagging behind the group, that morning I was leading the way. 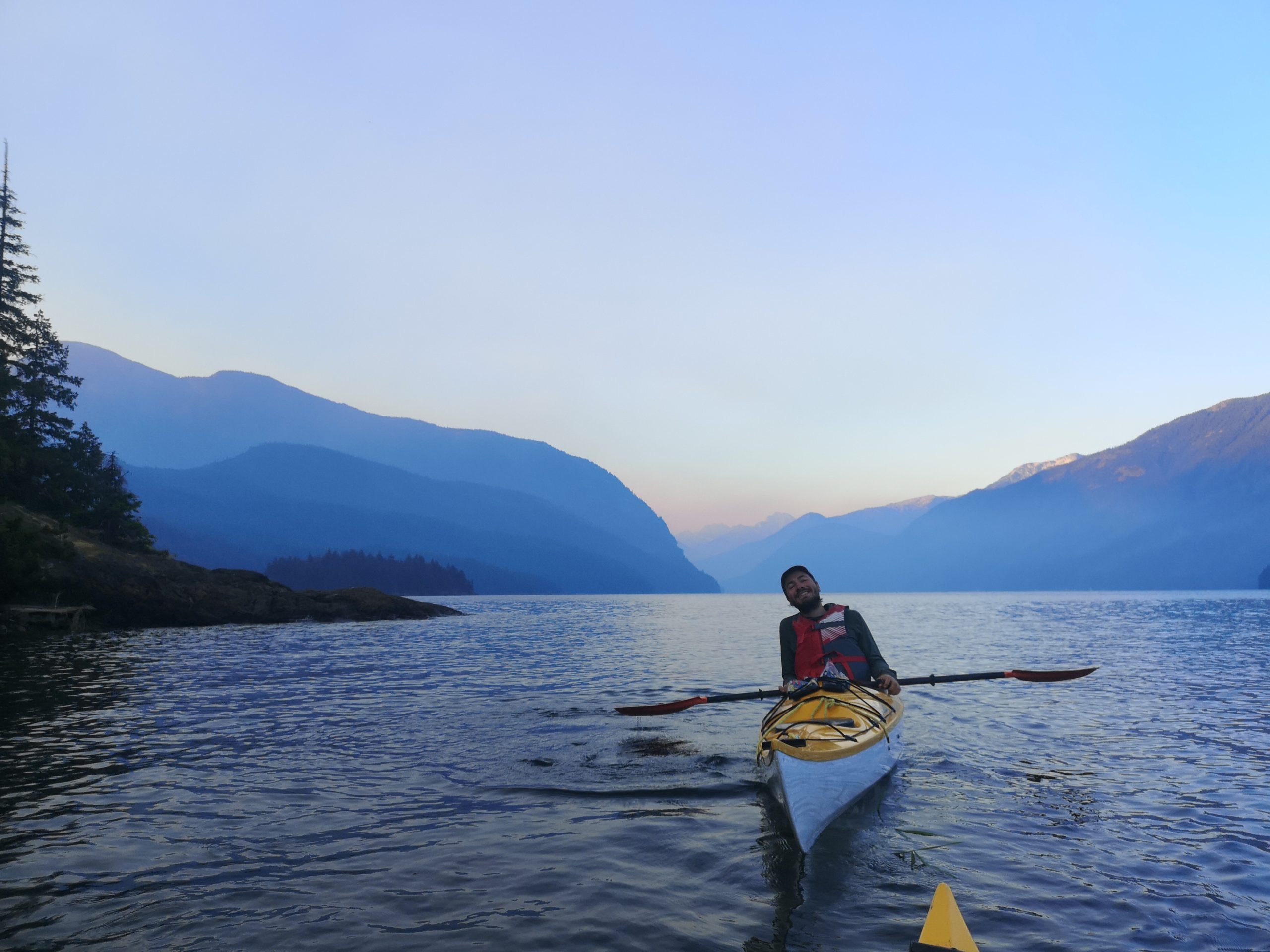 A beautiful day to kayak to Canada

We knew that although this border felt momentous to us, it was just going to be an unmarked line in the water of the lake, so we kept checking our GPS location so as not to miss the exact moment we reached it. But as we got closer I realised there was a line, not in the water, but in the trees next to the lake. Just like at the official northern terminus, there was a break in the trees on either side of the lake showing where the United States ended and Canada began.

We kayaked over it, cheering and screaming at the top of our lungs. Maybe that was something extra special about crossing the border on a lake: we were pretty much alone and no one was watching us, so we didn’t have to contain our emotions. We really did let it all out, the joy, the relief, the sheer awe that we were there. We sat in our kayaks and waved our paddles in the air and felt every single bit of it.

Once we’d calmed down a little, we paddled over to the eastern shore and went in search of a monument we’d seen tucked away in the trees. We grabbed our bottles of champagne and our paddles and set off exactly how we’d been in the kayaks: all wearing as few clothes as possible. The second we walked into the trees we started to feel them crawling on our skin. “What’s happening?” someone shouted.

I looked down at my legs and could see about 20 mosquitoes poised on my right one, ready to bite. My back felt like it was covered in even more. We dropped our paddles and champagne bottles and started trying to bat them away, running up and down to stop them biting us. But there were just too many.

After a panicked two minutes, in which we couldn’t even find the way up to the monument, someone broke and said, “I can’t do this, I’m going back.” We retreated to the kayaks, killed the last of the mosquitoes still riding on our backs, and grabbed our raincoats. I didn’t have anything to put on my legs, but it would have to do. We didn’t care if it meant getting eaten alive, we were getting a picture with that goddamn monument to prove we had made it to Canada.

They really were the worst mosquitoes we’d seen all trail, worse than the Sierra, worse than Oregon. But we suffered through it as we sprayed and drank our champagne and each got a photo. We laughed about it, because actually it felt kind of right. Of course there had to be mosquitoes, it couldn’t have just been easy: there had to be one last challenge thrown at us. Celebrations at the border

We all agreed that in the end, it had worked out perfectly. It may not have been the place we thought we would finish, and definitely not how we thought we’d get there, but it was everything we could have hoped for. Being able to cross the border and getting ourselves there using our own physical strength (even if we didn’t use our legs), felt like the closure we had needed. I might never get to see the official PCT northern terminus, and honestly, I feel completely at peace with that.

After our celebrations, we ate lunch, kayaked halfway back down the lake, jumped in naked several more times, then the next day we returned the kayaks to the resort. As we paddled the last few miles, we felt unstoppable. They had said we needed four to six days to get to the Canadian border and back, and we had done it in under 48 hours. Our arms were sore and we had blisters on our hands, but really it hadn’t been that hard. The thing is, thru-hiking has a way of making you believe you can do anything. It makes sense when you think about it: I started this hike with no idea if I could do it. I was so scared that I wasn’t strong enough, or tough enough, or just plain stubborn enough to make it. I wanted to do the whole thing, but I didn’t know if I had what it takes. As time went on, and I got further and further into my journey, I had no choice but to realise that I was more than enough. Enough everything. Because I was out there, doing it, and Canada was getting closer every single day.

People often make the assumption that I wanted to do something like this to “find myself”. It’s true that by the end of this hike I felt more myself than I ever have before, but if anything I feel like I have completely lost myself. I have no answers about my life and what I want to do with it. I have no idea what happens next, or how I go back to living in society after four and a half months of living in the woods.

But I do know that I am capable and resilient and that ultimately it doesn’t matter if I don’t know. Because if I can walk (and kayak) 2,600 miles, from Mexico to Canada, then I can do whatever the hell I want. Not the PCT northern terminus, but it will do

The Best Double Camping Chair for You and Your Partner

AT Days 116-119: Finding food is easier than finding hikers

The Igloo 4500 Adventure. – The Backpacking Hiker

Essential Gear for Camping in Colorado