I started joking in this section that I had replaced a full-time 9 to 5 job with full-time 9 to 5 hiking. Since I was trying not to push my knee to the point that it would get worse again, my days on trail were pretty short. I would sleep in, sometimes waking as late as 8:30 or 9, then hike about 15 miles, and make camp around 5 pm. My camp routine is simple and I have it down, so I was crawling into my tent around 6 most nights.

While this meant that I had no aches and pains beyond the tendonitis, this also meant I had a lot of downtime. For the same reason that I don’t like taking zeroes, I also don’t like having downtime while on the trail. I can waste time with the best of them in the real world, but in the woods I want to be more present.

For a variety of reasons, I hadn’t been taking breaks while hiking. Thanks to the bruised tailbone, sitting down to take a break was painful and not remotely restful. It seemed more prudent to just walk and eat since I’d have to stand anyway. Also, if I stopped for more than a minute or two, my knee would get stiff and I’d have to warm it up again to lose the worst of the limp. Once, I stopped to chat with another hiker and after I restarted I was met with concerned questions from the next folks I ran into because my limp was so pronounced.

I’d planned to make it all the way to South Lake Tahoe without another stop, but that plan quickly changed. My dad had been thinking about flying out to meet me, as my mom had planned to do when both of us were supposed to be out hiking, but when things changed on his end and he couldn’t fly out, I no longer had to be there on any specific days. 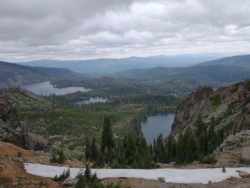 Almost the same time as I learned that information, I met another hiker on the trail who couldn’t recommend Donner Ski Ranch highly enough as a stop for food, laundry, shower, and to spend the night. I was sold.

The morning I was going to head in to Donner Pass, I woke at 5 and couldn’t get any more rest – I was too excited at the prospect of a proper meal and a night indoors. It was probably the fastest 11 miles I’d hiked since hurting my knee, and I arrived far too early to check in.

After nearly an entire day of sitting around, hanging out with other hikers, and eating and drinking whatever, I headed back out on the trail. I felt good as I walked away from Donner, but nearly the second my feet hit trail again, I just started feeling sluggish. I couldn’t make up time. Miles were passing so slowly that at times I worried that my watch was broken. The one time I felt like I was finally moving well, I realized that I’d accidentally turned down a side trail and now had to backtrack over half a mile. 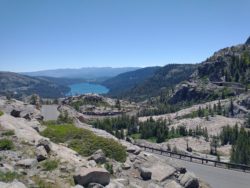 By the time I made it to my selected camp site, at least four miles short of where I’d hoped to get, I was crying. I couldn’t really put my finger on why, but I was barely able to keep it together as I put my tent up. As soon as I had a shelter, I dove inside to cry and checked Guthook to figure out a plan to ditch. I was done.

Somehow I made it through the night. I filtered water, I cooked dinner, I cuddled up and fell asleep. And when I woke the next morning to nature’s call, I realized that all I’d needed was a good cry. I was feeling rejuvenated and ready to go. By the time I was a few hours into the day, I was moving quickly and my spirits were high; I was immensely glad that I hadn’t pushed on the night before to bail out.

Our Adventure in The Swiss Mountains

My 5 Favorite Trail Towns on the Triple Crown

The Igloo 4500 Adventure. – The Backpacking Hiker