We had set the alarm at 7 and had a 90 minutes yinyoga session with our host in a huge tipi. It was amazing and showed us how stiff our bodies are. My lungs even got some training ache even if I have been bothing but puffing the last four months.

After the yoga we got a breakfast with some fresh berries and breakfast burritos with coffee. It was again amazing and the place left us with a positive attitude. Before leaving the host gave us a bag of pot for the hike.

We continued hiking rather monotonous desert hills. We met a couple of day hikers of whome the other one was hiking for the first time. We met also a SoBo we had not met before, Clean Shave that had started the hike in late July.

We walked a longish off-trail walk to a watercache and then a short uphill after that until we decided to camp on a scenic hill. The sunset was amazingly dramatic and the evening didn’t feel as cold as most of the previous evenings. 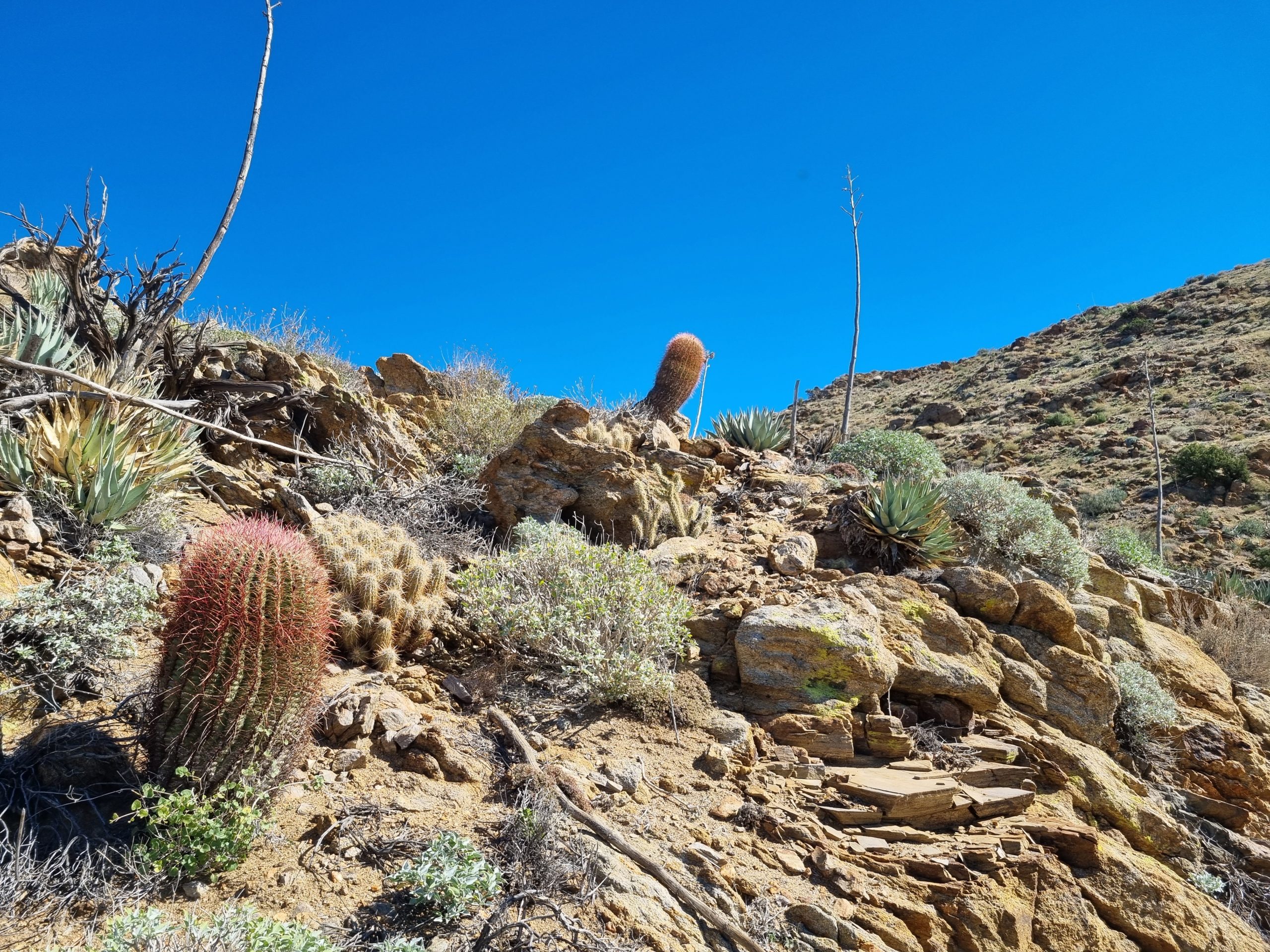 The night was surprisingly warm and I didn’t exceptionally need to sleep in a fetus position with my head drawn inside the quilt. When we started hiking it got very hot, and after the breakfast we were already peeling off layers of clothes. As we were standing in the middle of the trail in our undies a hunter showed up behind a corner. He was so surprised and embarrassed by our halfnaked butts that he returned behind the corned. We where yelling at him that it was ok to pass. He asked if we had seen any deer. Nope, not in weeks.

We came down the road and had to hitchike a while before we got a ride to Julian. The town was pretty cute with oldfashioned signs and shops. We had the famous free pie at Mom’s Pie. We got also free cider at the cider place and bought some jam. We did the resupply in a small store that didn’t have super wide selection when it came to fresh food. Some men were asking about our hike outside the store and thought first we were NoBos. After hearing we were walking from the Canadian border they were pretty impressed.

Since it got dark early we decided to sleep at the American Legion that has free camping for PCT hikers. We went there after 4 p.m. and it was filled with folks that were superdrunk and trying to convince uss to stay there for the drinks. We left our stuff in the kitchen and went to the brewery that again had no vegetarian choices except from an overprized Margarita.

Nine Beers said that we might as well get drunk since we could only go to sleep after 10 p.m. when the Legion bar closes. So we ordered strong pints and sat down to drink. As we sat there Clean Shave come in and said he had a ride to the trail that night and we could also get there. We figured it would be warmer to sleep in lower altitude than cowboycamp behind the bar so we went and packed our stuff and jumped in a minivan with Clean Shaves friend that drove us to the trail. He even gave us more weed with us so we had more than I’d use in a year.

It was hard to hike in the cold and dark after the beers and we set up the tents at the first spot we found. I had a crazy headache and it was too cold to fall asleep in hours. 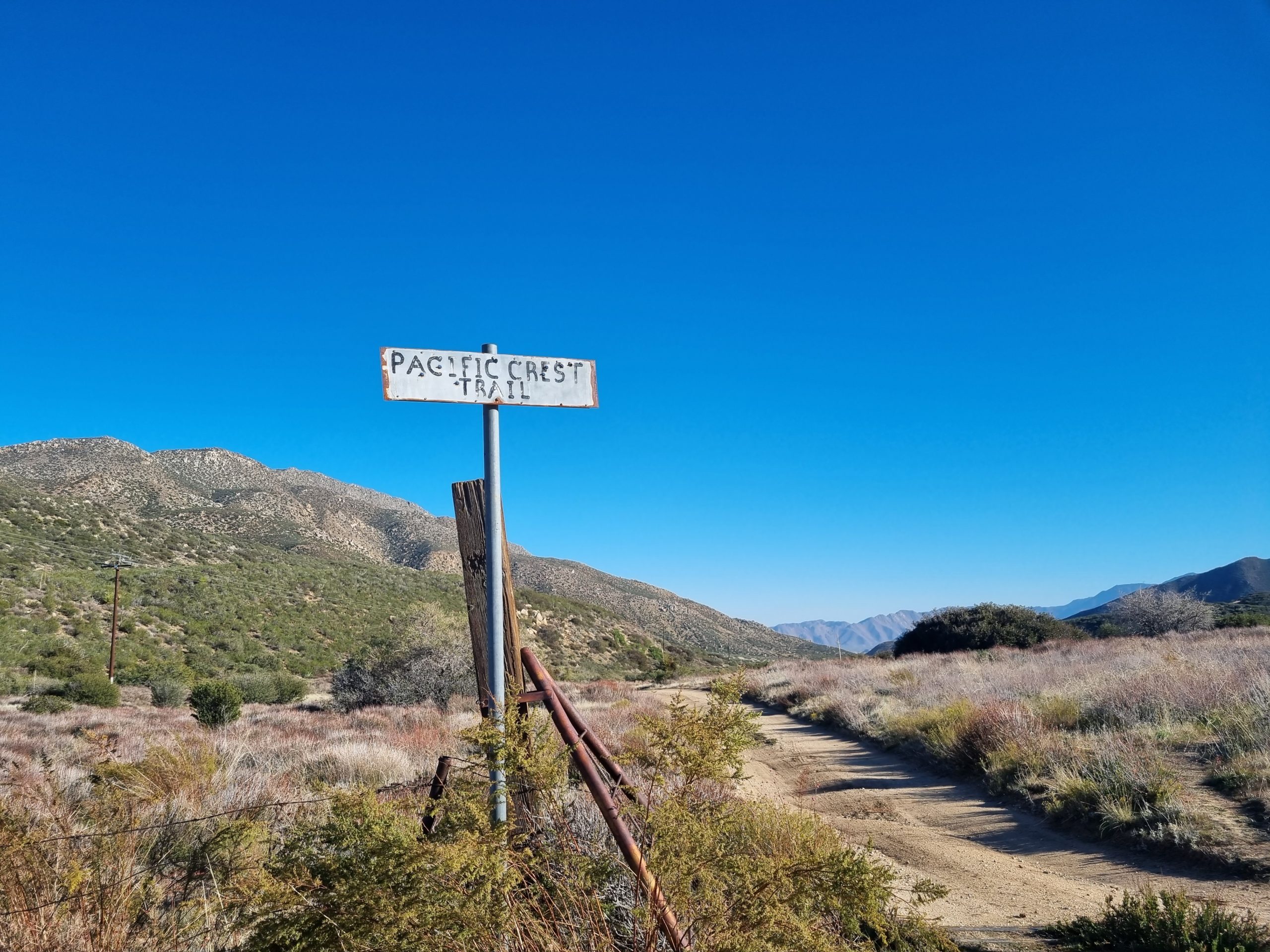 We woke up at 06.30 and walked just less than a mile before we had breakfast in the sun. Our tents and waterbottles were again frozen but in an hour it was warm again. We walked a bit with Clean Shave and as we were snacking by the trail two hikers came to us – Sky and Big Bird! They had had crazy hard times passing the mountains near Big Bear and San Jacinto and had almost pressed the SOS botton because of hypothermia. We were glad we had missed this experience. We were talking about our plans after the trail and the expectations versus the reality and had a long break.

We were soon left after by the others and also Nine Beers went ahead of me as usual. I got a crazy stomach ache probably caused by my endometriosis and had to lay down by the trail. There was cell service so I messaged Nine Beers that I had to wait it to pass. Then we had lunch in the sun and decided to take a nap. Aftert that we passed the only watersource of the day so we filtered some water there. This all took a lot of time and resulted to a short day. We wanted also to camp in a lower elevation as there was again a wind warning starting from 3 a.m.

The campsite we stayed at was partly covered by some bushes. Already by the time we went to sleep the socks I had rinsed earlier had frozen solid. 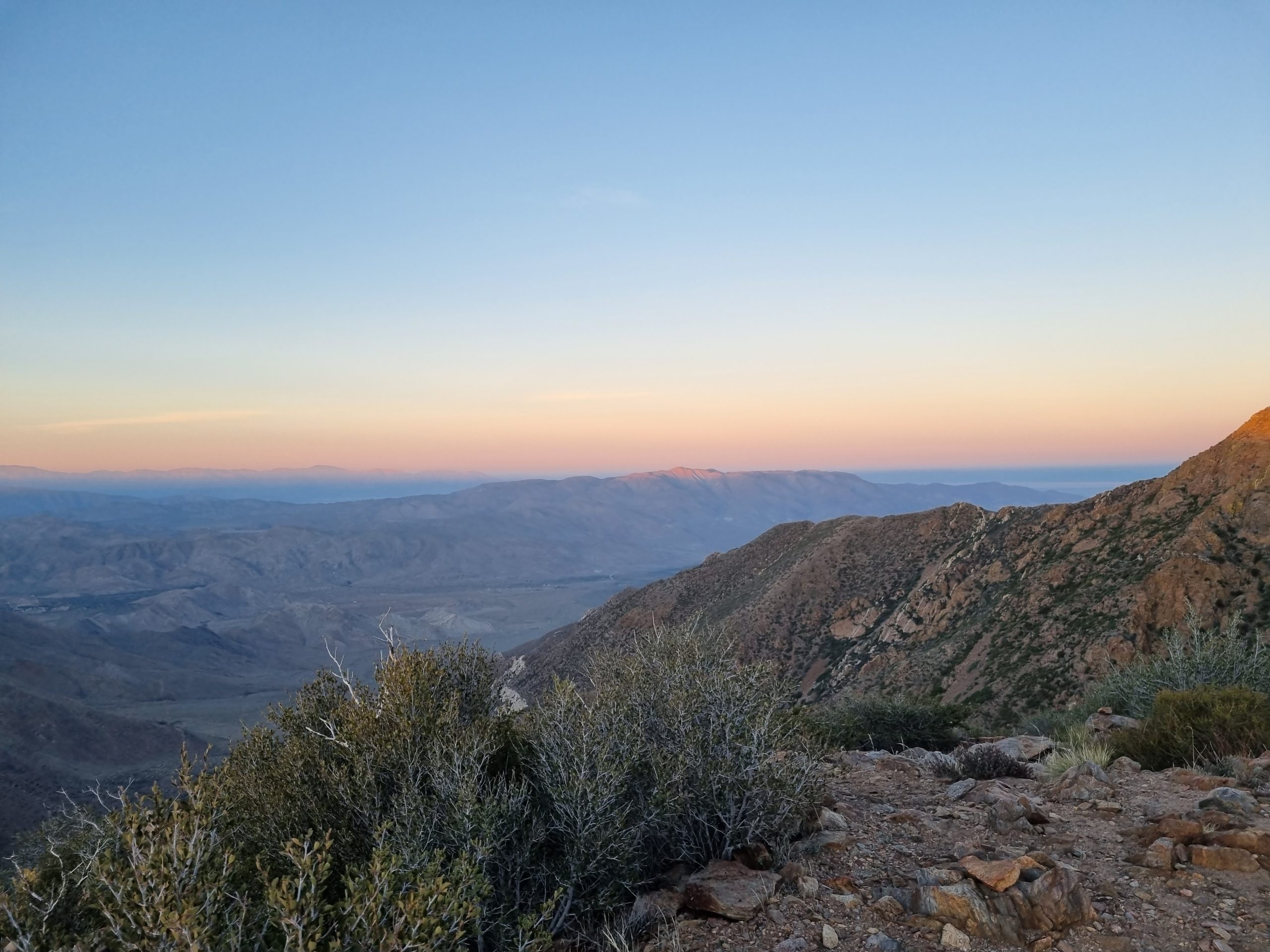 It was indeed a very cold night and it was impossible to sleep properly even with all clothes on. We started walking and already going up the climb it was remarkably warmer. We had breakfast less than a mile from the camp and Nine Beers noticed she had forgotten her water bottles at the tentsite. Since a hiker never wants to turn back she decided to survive with her Nalgene bottle and a waterbag.

We walked 4 miles to a watertank that says “not drinkable” and filtered a maximum carry capacity of water. By the pit toilets we saw a hiker coming from a car and realized it was Clean Shave. He had frozen so badly that night that called his sister living closeby to pick him up and he had stayed that night indoors. He had even sent a message asking if we wanted some townfood but we missed that.

Clean Shave said that he might get a cabin in Mount Laguna where we were only planning to get the next day. He asked if we wanted to share the cabin and suddenly sleeping indoors instead of shivering in our frozen tents. So we started to hike faster to make it earlier to the “town”.

We hiked pass the bushy desert landscape and saw a beautiful sunset. We could see finally the lights from Mexico. Then I stopped to take out my headlamp and it was not in my pack! I had lost yet another expensive headlamp. Fortunately Nine Beers was not too far away so I yelled her to stop and we hiked the last miles in the dark close to each other.

Meanwhile Clean Shave posted a picture of a beer he was drinking in a restaurant in Mount Laguna and we speeded up there dreaming of fries. Indeed we made it in time and I had some fries and a glass of wine.

Back at the cabin we took showers and watched The Revenant dubbed in Spanish. I was not sure what the plot was but it seemed that Leonardo was SoBo hiking the PCT in South California in that film, or something similarily miserable.

Top 10 Hiking Gift Ideas – For Every Hiker on Your List

How Should Hiking Boots Fit – Preparing for a Long Trek

How Should Hiking Boots Fit - Preparing for a Long Trek

How to Find a Good Campsite (Tips from Experienced Campers)

7 Fun Things To Do for Backpackers

How to Dig a Cathole