Should a Dog Attempt a Thru-Hike?

The conclusion I have come to as to whether or not a dog “should” embark on a thru-hike is unsatisfying. It depends on the dog, and it depends on how responsible the owner of that dog is.

I have some anecdotal experience of how people on trails respond to and feel about dogs being out there, especially when suggesting committing them to a months-long adventure. I’ve heard stories of dogs having to drop out early due to an inability to sustain the rigorous hiking each day, and I’ve read accounts of individuals who received some criticism for making their dogs hike for six months.

I would like to bring my dog, Jupiter, on my Appalachian Trail thru-hike attempt. It is crucial however that I am not setting her up for failure. Jupiter is a one-year-old, born on Halloween, Great Pyrenese. She has been on numerous hikes and truly comes to life when she finds herself in the mountains.

Jupiter has hiked around our home state of Florida, in North Carolina on the Art Loeb Trail, and on the AT in Grayson Highlands. She recently finished puppy school and it just so happens that she does quite well in a tent at night, even when various critters visit the camp. This happened recently, and we’re not sure what shows up in pairs and makes snarling sounds. Even when in that context Jupiter did not explode into a barking frenzy. For these reasons, I feel some amount of confidence in bringing Jupiter along for the ride.

If you’re familiar, this section is still about my dog, not JupiterHikes (coincidence).

To preface, I walk a lot. Around the neighborhood, in a local park, on a hike, it doesn’t matter, I just like to walk. Jupiter was subjected to this as soon as she joined the family. She didn’t take to it quickly. It was a weeks-long process to simply get her to walk further than the end of our alley. However, over time this apprehension turned into full-blown excitement. She has become a wonderful hiking companion.

Her first official hike was in the unfortunately named, Cockroach Creek. It’s a small, not especially spectacular but certainly pretty spot in Florida where Jupiter logged her first three-mile day. That’s basically a 5k, right? A good milestone.

First Time in the Mountains

The first time she saw the mountains was on a trip to Grayson Highlands in Virginia. A, my partner (who may join me on the AT), grew up with and loves horses, I love the AT, and Jupiter was born to wander a mountaintop, so this State Park was a no-brainer. It’s also worth mentioning, Jupiter had never been camping. As a matter of fact, since moving in with us she hadn’t slept anywhere other than in a bed. As stated earlier, she ended up being a complete natural. Here’s a peek into her hike that week: 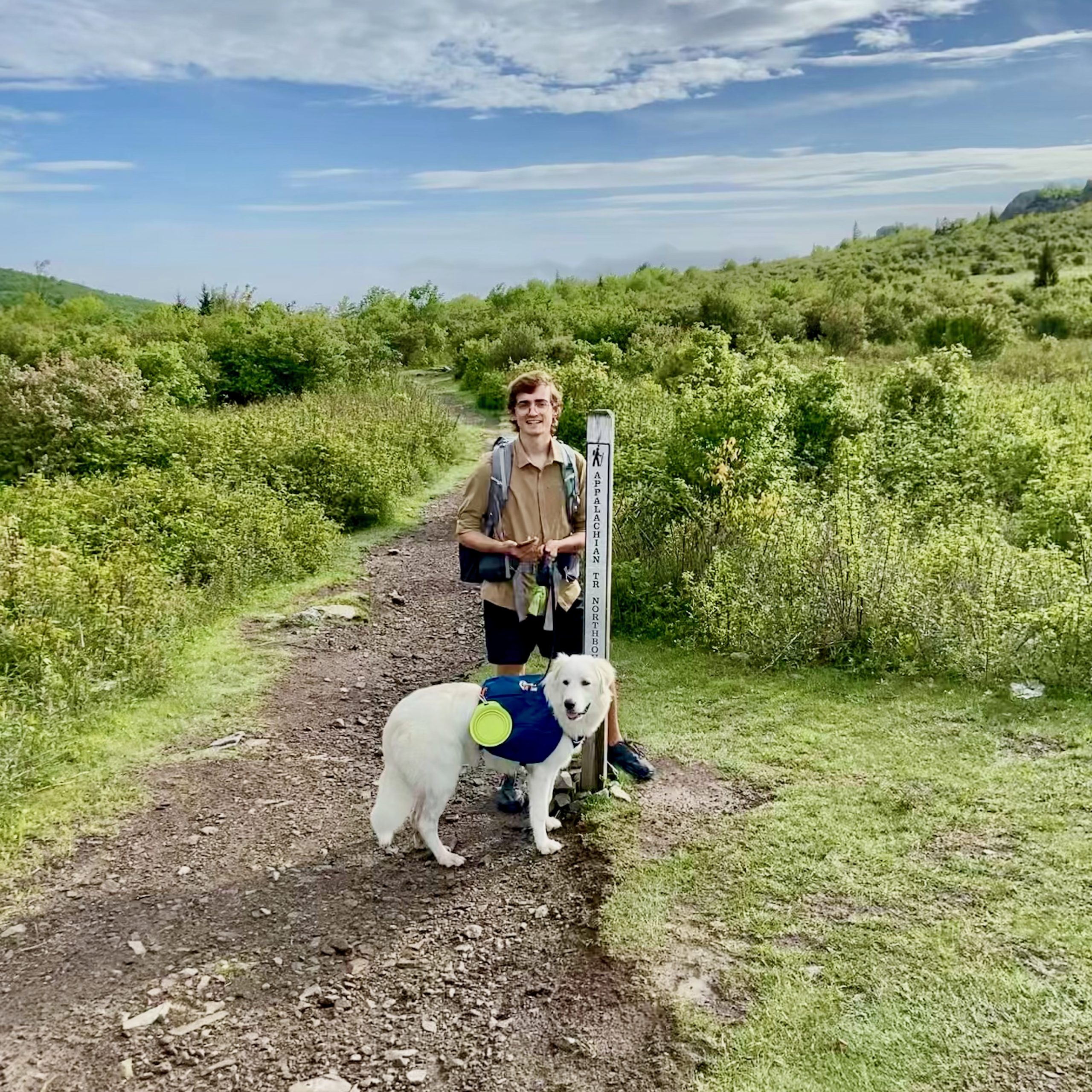 Jupiter returned to the Appalachian Mountains in October of this year when we traveled to North Carolina to tackle the Art Loeb Trail. This trip resulted in complete disaster and failure for reasons that unfortunately must be kept top secret. Bad planning, and a lesson learned.

Here we are waiting for a shuttle at Camp Daniel Boone: 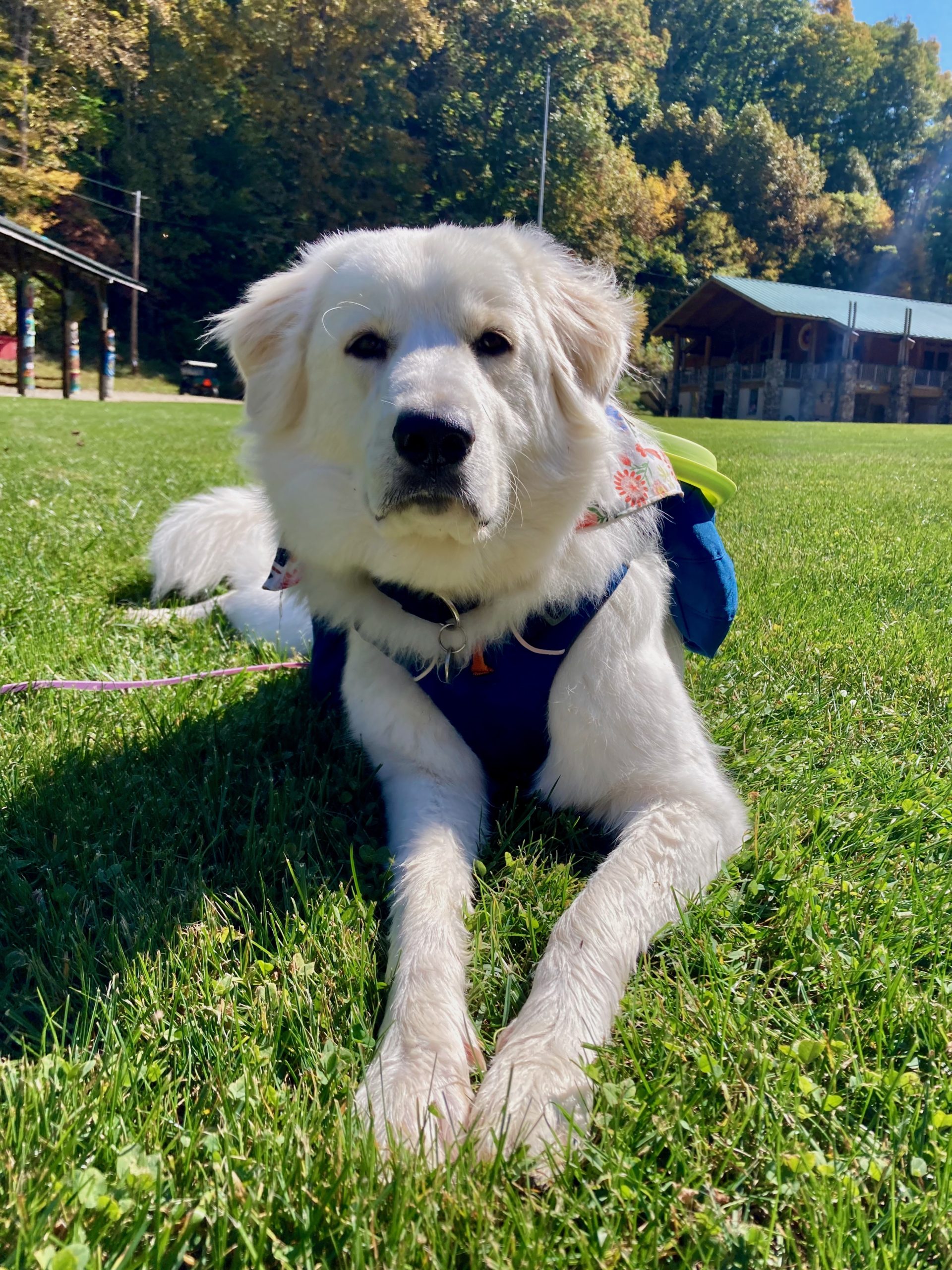 I wouldn’t refer to Florida as the best place to prepare for a thru-hike of the AT, or for hiking in general. But we make the best of it. There is a certain magic to the unique natural landscape of Florida, but if you want to feel the burn of a steep incline, you have to travel. We are working on scheduling a couple of trips out West for 2023. Namely, New Mexico and the PNW. Furthermore, we’re planning on moving out of state early next year. The decision of where exactly to move to is still up in the air, but one of the highest factors of consideration is proximity to good hiking. The point is, there is much to come for Jupiter’s hikes.

Exposing Jupiter to nature, camping, and hiking as often as possible is really the best we can do to prepare her (not to mention the general training and socializing done at home). I can understand the opposing perspective of dogs being out on trails. Though if you and your dog are capable of respecting people, nature, and the trail itself, bringing them along should be an option. The trick with all aspects of trail etiquette, I think, is just being transparent with yourself. Did I dig this cat hole far enough away from that water source? Did I secure my food properly? Is it safe to hike in this weather? Is my dog actually a ‘good dog?’ Probably a hard one to answer.

I know what to expect when taking Jupiter on a day hike or overnight. She will have the time of her life. But I don’t fully know what to expect when she’s been away from home for weeks and how her body will handle miles up and down every last mile on the East Coast day in and day out. She’s a well-behaved dog, possesses no ability to be aggressive, and prefers to stay close to her people. She’s used to wearing her backpack and is happy to walk on a leash, but even with all of that being true, my approach is to hike Jupiter’s hike as long as she’s out there, not mine. 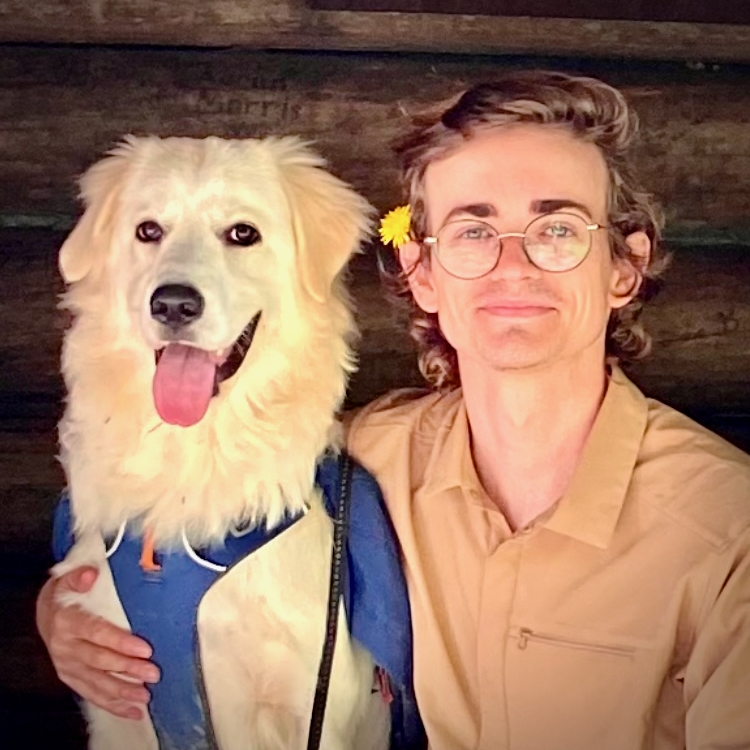 6 Tips for Choosing a Mountain Bike

First trek report of Lamkhaga pass (from Chitkul side)