Hello again, long time no chat!  Clearly, I’m not great at writing blogs with any sort of timeliness, but it felt wrong to not conclude my semi-documentation of my 2022 Appalachian Trail thruhike.  Spoiler alert, I completed the Appalachian Trail a little over two months ago.  On September 25, 2022, I stood on top of Mt. Katahdin in a sort of stunned haze, said goodbye to my dear trail family in the parking lot of the Millinocket McDonalds, and drove away from the northern terminus I had spent five and a half months trekking to.

In all honesty, I was waiting to write my final blog until I felt like I had processed the trail.  But two months have passed, and I don’t think that day will ever come.  I stood enviously watching friends cry at the sight of the Katahdin sign, wishing I had some intense emotional response, but in my head it felt like it wasn’t really the end.  I still feel like Chilly and Key Lime will walk through my door any minute, saying it’s time to get back on trail and that we’ve taken too many zeros.

Initially I berated myself – why don’t I feel super emotional?  Why does it feel like it was one big six-month fever dream?  But to me, the trail hasn’t really ended.  I live so close to the Appalachian Trail that I walk along it nearly every day.  I talk to my trail family regularly, and we are planning a reunion as I type this.  My DNA is permanently intertwined with that narrow dirt path that stretches from Georgia to Maine.  I don’t feel closure because for me, there’s none to be had.

How long did it take you?

I hiked the 2194.3 miles from Georgia to Maine in five and a half months, from April 10 to September 25.  We got to Maine on September 1 and took almost a whole month to hike the final state, partially because we knew we’d finish in time so why rush, partially because New Hampshire was absolutely gnarly, and southern Maine wasn’t much easier.  When I got injured in June, I flipped up 80 miles so I could stick with my trail family, so I spent 5 days in October completing those final 80 miles in Virginia.

Did you hike alone?

I started the trail alone, but immediately became friends with the people hiking around me.  By the second week I met Chilly and Key Lime, who I hiked with for 2,000 miles (shout out to the best lil tramily on the planet!).  I only camped alone twice in the 173 days it took me to complete the trail.  So, if you’re starting the trail alone and are worried about it, don’t be.  You’ll meet so many amazing people to hike with along the way, and if you’re lucky, you’ll get some lifelong friends out of the deal, too. 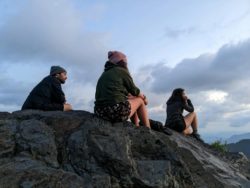 Chilly, me, and Key Lime at Charlie’s Bunion in the Smokies, around mile 211 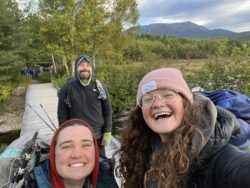 The tramily at the base of Mt. Katahdin, around mile 2180

What was your favorite state? 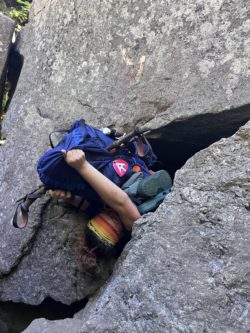 Fighting for my life in Mahoosuc Notch

It’s a tie between New Hampshire and Maine.  New Hampshire was the hardest hiking I’ve ever done, but also the most beautiful.  My tramily and I were used to hiking 20 to 25 miles a day, and we dropped to 8-10 miles a day in New Hampshire.  I cried almost every day because I was so exhausted and disheartened.  But it’s the hardest stuff that I remember the most fondly.  The difficulty is partially why I loved Maine so much, too.  Mahoosuc Notch was a total jungle gym, which both inspired fear and joy as we scrambled through tunnels and launched ourselves over rock formations.  I remember at one point just seeing Key Lime and Chilly’s little feet kicking out of a small hole in the rocks and dying laughing.  At one point, I had to take my pack off and launch it over my head (don’t tell the Osprey customer service representative, please). 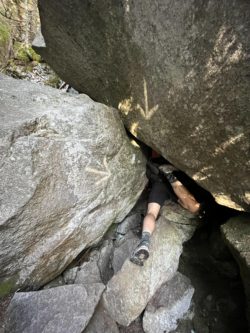 Monson, Maine was also one of my favorite trail towns, mostly because of Shaw’s, one of the coolest hostels on trail.  Bad weather made many people take zeroes when they weren’t intending to, so Shaw’s was one big hiker reunion of people I hadn’t seen in weeks, even months.  It was also a very much needed stop before the 100 Mile Wilderness.  We decided to do a food drop halfway through the 100 Mile because we wanted to really soak in the last stretch, taking a sort of victory lap and enjoying the trail and each other’s company before it was all over.  It’s a good thing we did the food drop, because the 100 Mile was FAR from a victory lap.  It rained almost the entire time, with highs in the low 40s, and we tip-toed on the line between cold and hypothermic the entire week.  The trail was a river, the roots tripped us up with every step, and I wouldn’t trade it for the world (in hindsight).  It was the definition of Type 2 fun, and if you asked me now as I sit at a desk at work, I’d go back in a heartbeat. 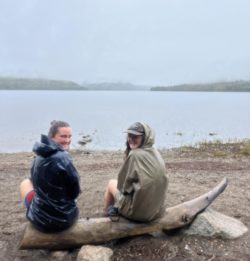 What advice do you have for someone who wants to thruhike the Appalachian Trail?

First off, listen to your body.  I have a bad tendency to live more in my head than in my physical self, and that had to quickly shift when I got an overuse injury in Virginia.  I needed to slow down and listen to what my body was telling me, but my head was stoked on big miles and keeping up with my tramily.  Shin splints took me off trail for 5 days, the miles of which I ended up skipping and hiking solo after I summited Katahdin, so I could stay with my friends.  But if I had listened to my body and just slowed down, I wouldn’t have developed an injury that I struggled with through the entire mid-Atlantic.

I would also say to not take yourself too seriously.  When you get out there initially, very few people have any idea what they’re doing.  Just do your thing!  We’re all just animals getting back to our roots, trying to figure out how to survive in the wilderness, and if that means you have some janky gear or weird routines or find yourself eating dinner in a privy because you weren’t prepared for the weather, that’s ok!  It’s actually great, because those weird moments are the ones you’ll be yearning for once the trail is over. 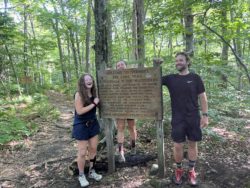 Thruhiking the Appalachian Trail was the best thing I have ever done with my life.  I am forever changed by this narrow little path of dirt, the trail angel community that cares so much for complete strangers, and by the other hikers I met along the way.  It takes a certain type of person to walk over 2,000 miles on some sort of pilgrimage to who knows what, and I am so proud to be a part of this crazy community.  And with only one more year on my mom’s health insurance, you better believe I have some more walking in the works for 2023.

Until next time,
Sunshine

Everything Beginner Backpackers Should Know

What’s in My Backpack? My (Pre-Trip) AT Thru Hike Gear List

How to safely hike alone: On the trail