Christmas on trail! – The Trek

As December ticks by, the build up to Christmas is becoming more apparent each time we pop out from the trail and into towns.

In Wellington, i’m buying a new pack liner (probably your most essential piece of gear for the TA!) and the cashier asks if i’m headed to the santa parade which is about to start. I don’t even know what day it is. Christmas?! I think. Huh, weird. I go back to the hostel and fall asleep- it’s one of those hazy zero days where you just need to do a few chores, fuel up, and rest.

I did a 50km day to finish off the North Island, maybe that’s why I was tired on my rest day in Wellington?

The following day I’m stepping off the ferry I took to the South Island and am greeted with a ‘26 days until Christmas!’ Sign. Oh, that’s why they had that santa parade, I finally register.

Although it was a relatively chill (but beautiful) start to the south island on the Queen Charlotte track, I feel… like taking a break. I bombed through the last of the north island while I had a good weather window. I needed to send a couple resupply boxes ahead to some of the smaller/non existent towns. I also wanted to fully rest up before the TA’s toughest section and apparently one of the hardest tramps in New Zealand- the richmond ranges.

So, I take QUADRUPLE zeros in Nelson. I head out for an ice cream and end up bang in the middle of another, you guessed it, santa parade. This time I actually watch and it’s amusingly led by some scottish bagpipes. I think i’m being organised by sending a load of christmas postcards home- “they should arrive by the end of January” the post office lady smiles to me as she sticks some festive looking stamps in each corner. Damn, oh well, i think. 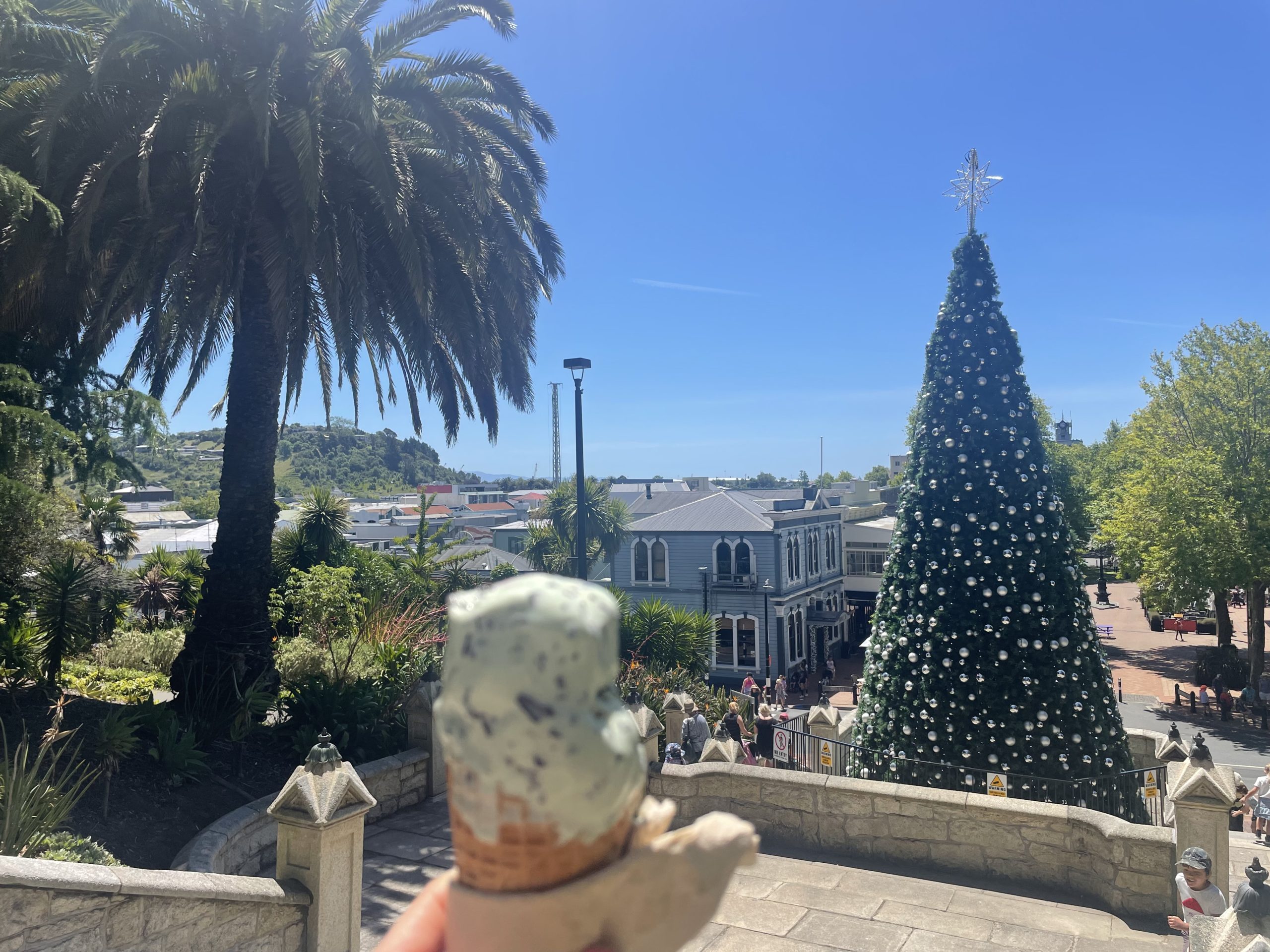 The trail on the South Island has been giving us the ‘wilderness feel’ so many have been chasing. Town day every other day on the north island is definitely a treat, but it grew old quickly. We’ve been enjoying the 5-7 day stretches of trail with no phone service, only a handful of people on the trail, and honestly a step away from that festive rush. A few hikers who have family in New Zealand have understandably ducked off trail for the festive season. The rest of us have knowlingly set foot on the TA knowing we’ll be in some random backcountry hut on a different contintent to our friends and family.

You know that weird period of time inbetween christmas and new year where no one knows what day it is? That is honestly everyday on trail whether it’s christmas or not. We have been packing out a few extra christmas treats along the way though. 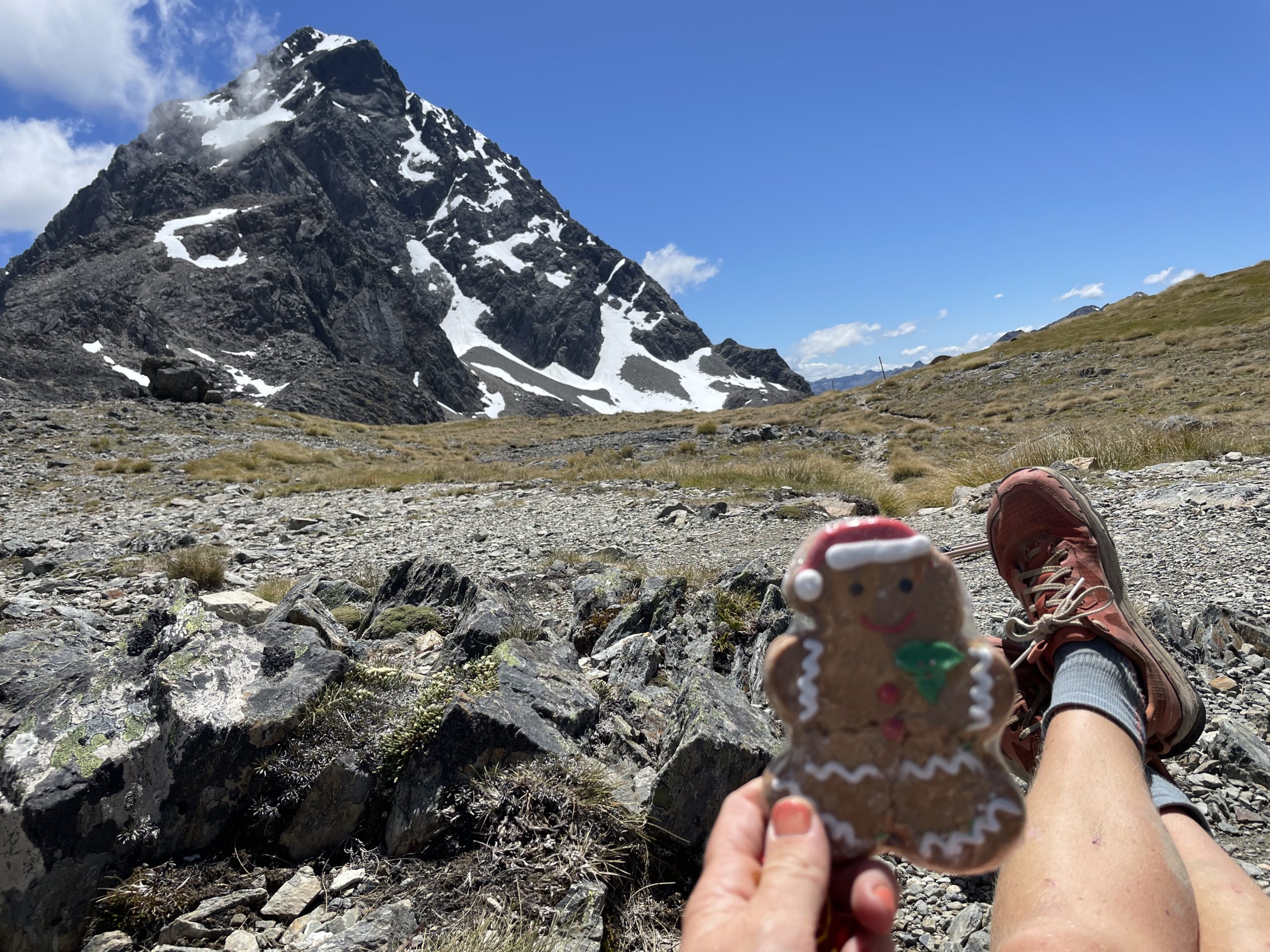 I crack open my ‘mrs claus gingerbread man’ on the top of travers saddle after applying my 3rd round of sunscreen that day. Seeing a few patches of snow on the summits that day certainly adds a Christmas feel!

I’ve always trusted the timing of where I am on trail. Arthurs pass was a perfect example of that feeling- of being in the right place at the right time. My grandad- Arthur, was the OG hiker of the family. Being in a tiny village surrounded by giant mountains, passes and waterfalls was humbly fitting. Even more so when my sister reminded me he would have turned 90 years old on the day I arrived into town!

We vortex here for 2 unplanned zero days. Bill’s Sanctuary is somewhat of a ‘hiker haven’ with easy access to some awesome day hikes. 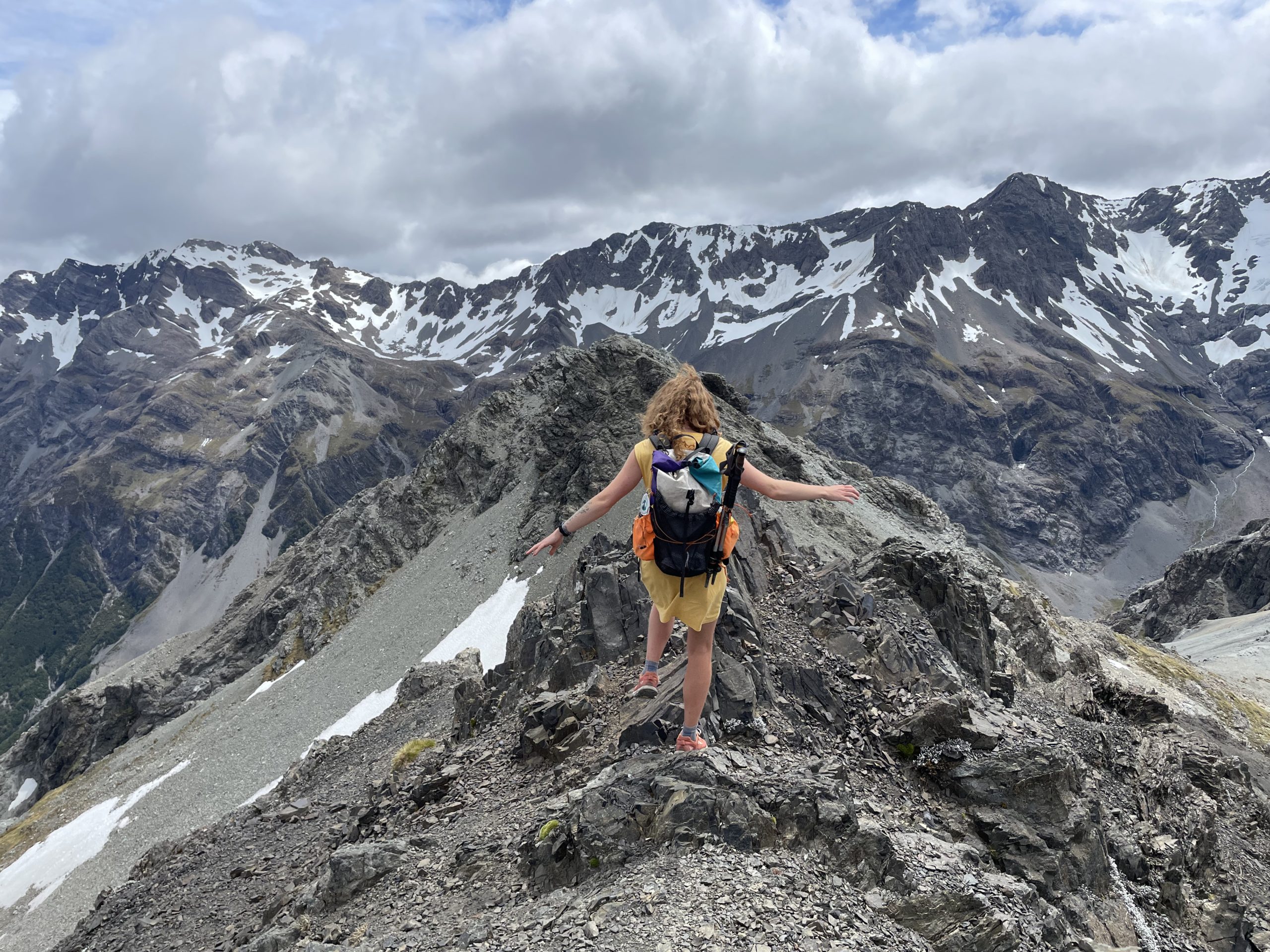 Christmas eve is spent with a mirage of familiar hiking faces. We’ve all landed in the same town at the same time and it’s a great social mix.

‘The German’s’ we met in the infamous bright orange hut in the middle of a cloudy, cold pass are here- they are medics and friends of 11 years, hiking the trail on overtime hours. 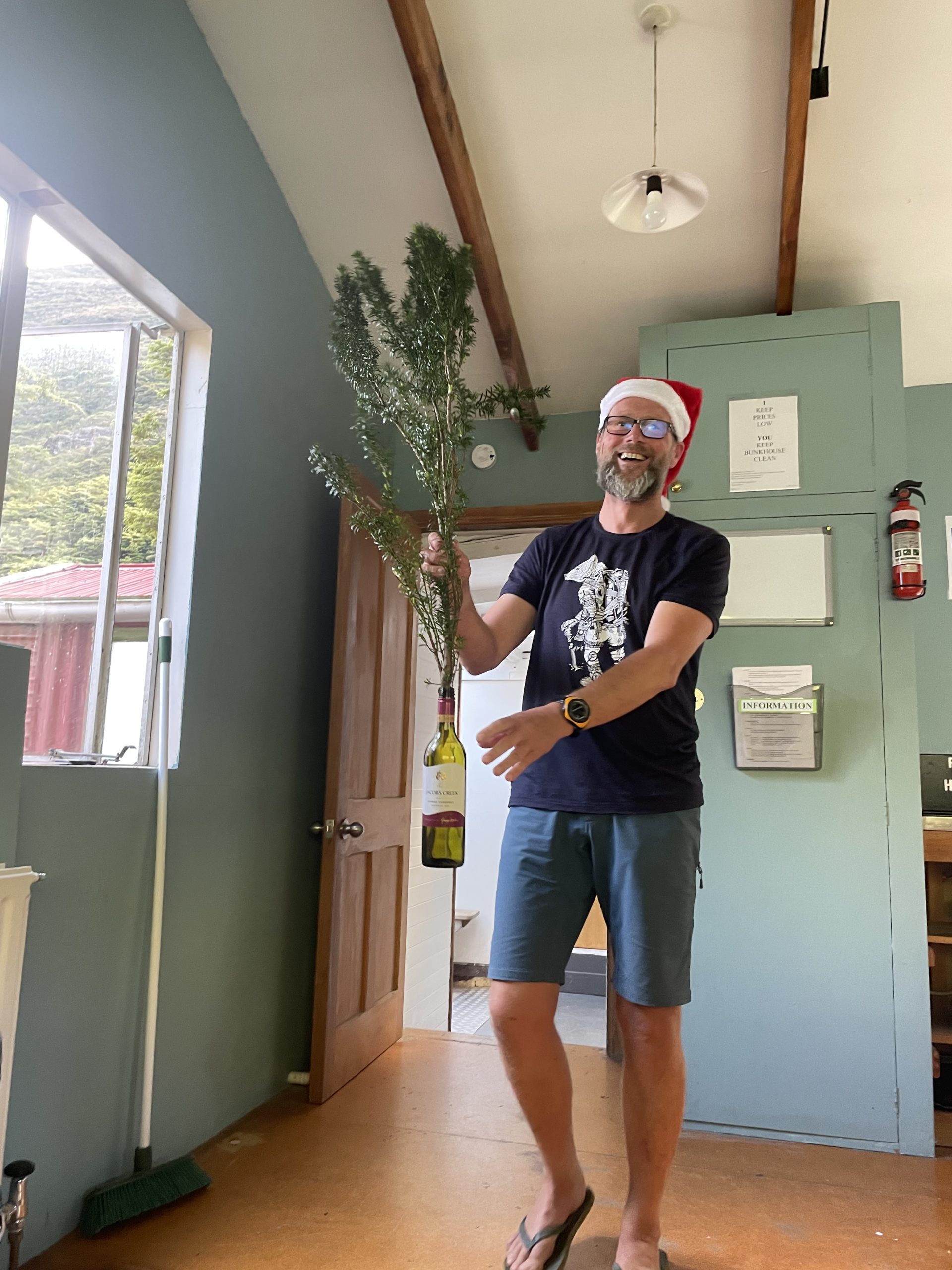 Katharina, who I hitched all the way up to the start of the trail with on our very first day is also here. The guys from Colorado, who caught a pig with their bare hands one morning, roll in next. They later lead a swing dancing class and we’re all laughing our way through christmas eve. Penelope from Montreal beams around the corner- she took an unsuccessful break in Christchurch to fix her pack, but she is still smiling. Theresa and Sabrina appear and pitch their tents in the garden- I haven’t seen them since that terrifying type 2 fun day up on mount Rintoul! 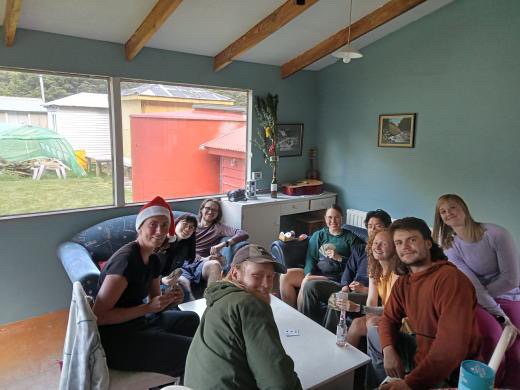 We’re all in a haze of sipping beer, napping, catching up with family. Then I hear a “Tim is in Bluff!!!” Context- Tim has been running the trail, unsupported, in an attempt to get home for christmas. We’ve all met him along the way, and we’re all stoked to hear he’s achieved his goal.

These moments, these days, are when I absolutely love the trail community. You couldn’t get a more ‘pick n mix’ bunch. From all over the world. Completely different backgrounds and experiences. But when in this thru hiker bubble, we all have similar mindsets, motivations, and on-trail struggles! I’ve always said this- It is the people, it really is the people. 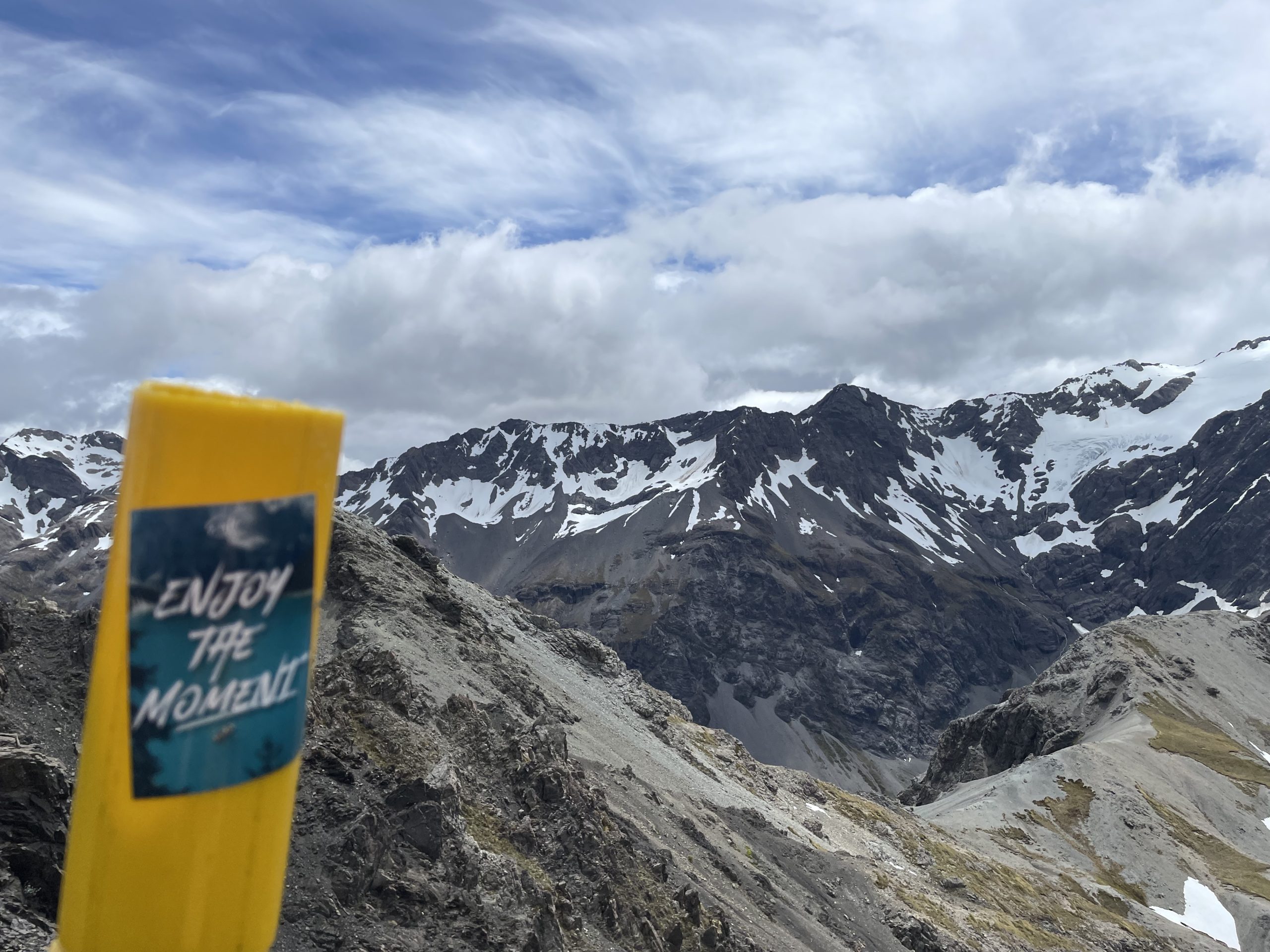 Siblings on the AT: 54 Miles of Shenandoah National Park in December

Siblings on the AT: 54 Miles of Shenandoah National Park in December

The Importance of Ski Goggles on the Slopes