After a few days on the trail we hoped we would be getting into the swing of things but with the trail threw a lot of different challenges by way of weather, steep elevation and a trail that in some places was hard to believe existed the trail continued to test our skill and grit. I suppose that’s what we get for starting the trail early in the season and in the Southlands of New Zealand.

Out of Birchwood was another 17 mile day, this time with Twyzel, a fellow kiwi hiker, and some wood related facts as company for the day. We negotiated a 7.30 departure (That being between Jenny’s suggestion of 9.30 and his suggestion of 5.30) and after a frantic 10 minutes of Jenny piling everything into her bag we were off at 7.40.

Navigation on trail is usually OK, following triangular orange markers but we have had our fair share of off-trail moments. The track isn’t well trodden, especially as we are some of the first to hike it this year so unless you are in tree cover you have to make it up as you go. As a result there are times we’ve got stuck on the wrong side of an electric fence, barbed wire or a river. Day 5 saw Joal get a bit too familiar with one of the orange marker posts as he was hopping a stile, resulting in a long deep gash and deep bruise to his left arm which would take over three weeks to turn back to a shade that resembled something normal. So far Joal’s been the most injury prone with a right ankle that keeps rolling, scrapes and cuts from our beach day, a burnt knee from a coffee making accident and now a gashed arm. I feel like that knight in Monty Python slowly getting beat up by this trail – ’tis but a scratch!! 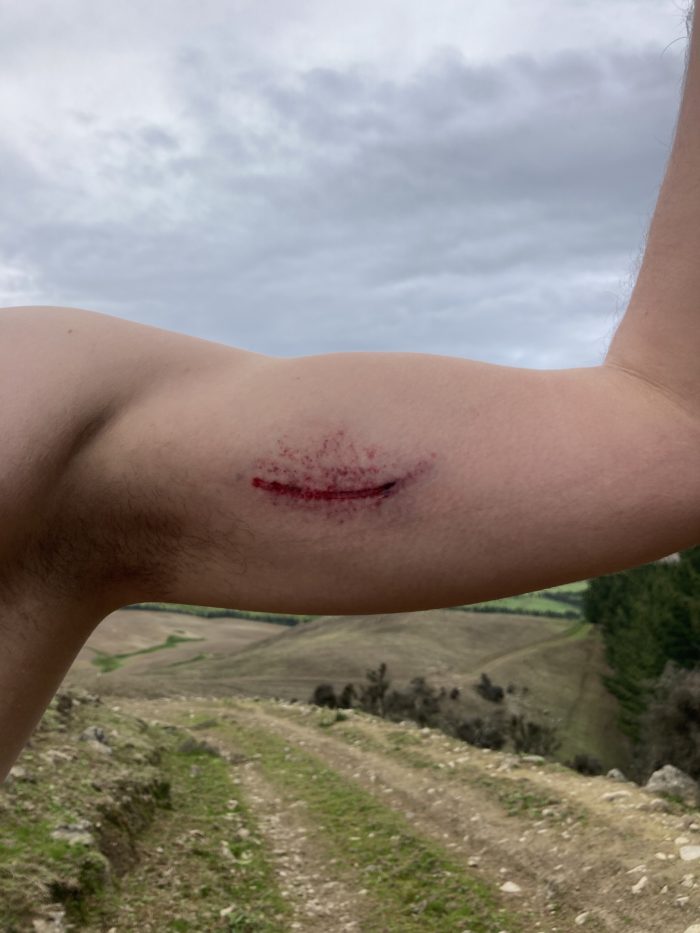 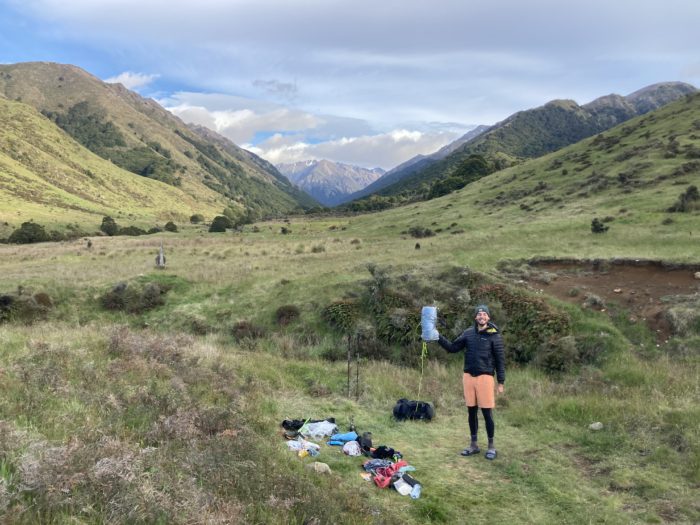 From Telford campsite the trail does what we’ve quickly come to realise this trail does: turn violently from a politely meandering river bed path to point straight at the highest, steepest peak in the vicinity. The New Zealand Department of Conservation hasn’t quite learnt what a switch back is yet either. 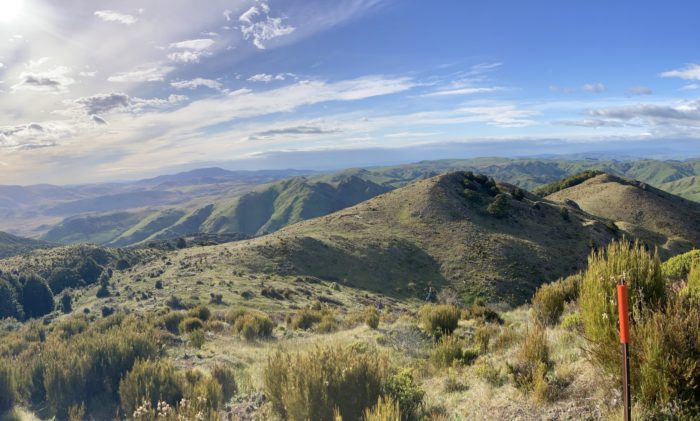 The route up the ridge was windy, frequently blowing us both off the faint path and into the sparse shrubbery and shale. After 500 meters of ascent over just 2km we were now very exposed, so we didn’t really stop to take too much of a look at what would be the last time we’d see the coastline, instead focusing on ensuring we made the right decisions this time. As we dropped under the tree-line things felt safer, even if there wasn’t really a trail to follow. 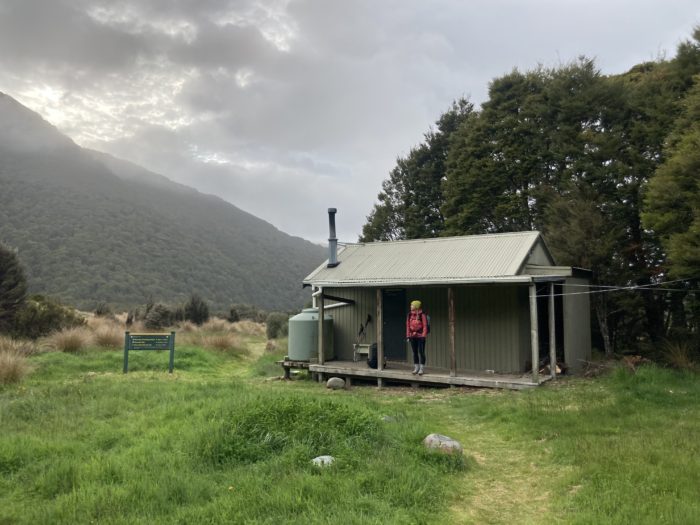 A lovely hut for the night

A 13 mile day finished at another DOC hut where ramen was again on the menu. Thirteen miles should really be an easy day, but our bodies ache from days of challenging, technical terrain. Even the flatter bits seem difficult with focus and attention required for each step to avoid getting wet or muddy, rolling an ankle or navigating a fallen obstacle like a tree as thick as Jenny is tall! Frequently our pace is less than 1 mile an hour. It is tough going!!

Making it up as we go along 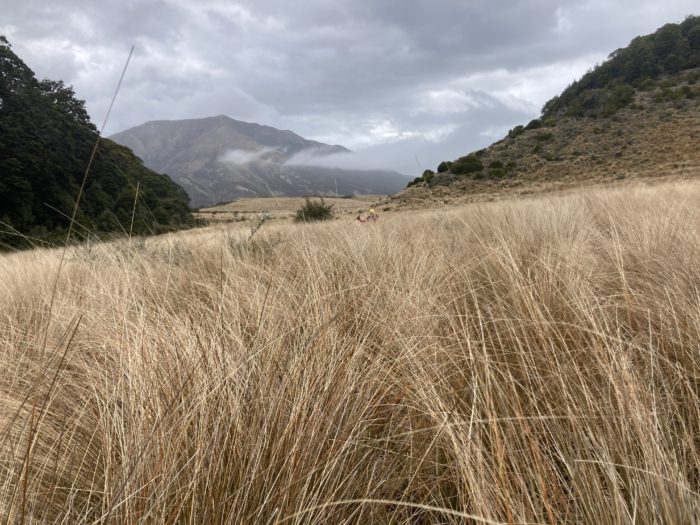 The trail – apparently… spot the hiker!

The final part of this section took us through savanna grass, up over a saddle and down to one of the main highways on the South Island. The grass felt like something out of Jurassic Park and for Jenny she frequently felt like she was getting poked in the eye and was disoriented due to not being able to see where to go over the head-height brush. The brush also hid the swampy ground that was uneven and frequently turned to river! We spent more time under the ground squelching slowly through the marshland than we did above it. 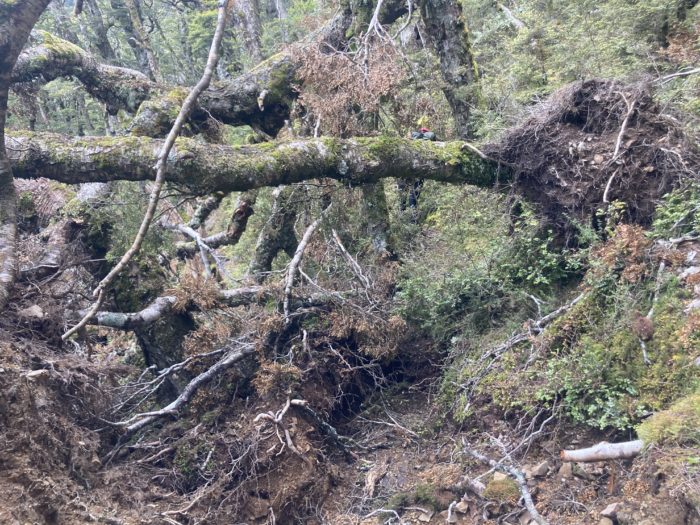 This was then abruptly replaced with a trail through the woods that required more gymnastics than walking. We’ve been told that a harsh winter has caused a lot of tree damage and this is evident by the poor state of the trails. Combined with a steep elevation our muscles and joints have been working overtime.

Unfortunately the intense terrain and lack of path has brought back a pain Jenny hadn’t had since Wrightwood on the PCT in 2018. Self-diagnosed as jumper’s knee, the pain got so great that we struggled to get to the road in time for the evening traffic, slowing to a crawl. To aid our pace I emptied Jenny’s pack of all but the sleeping quilt so that there wasn’t any weight on Jenny, whilst my pack became about 14kg. Luckily we were doing this without much food to carry or it would have been difficult. 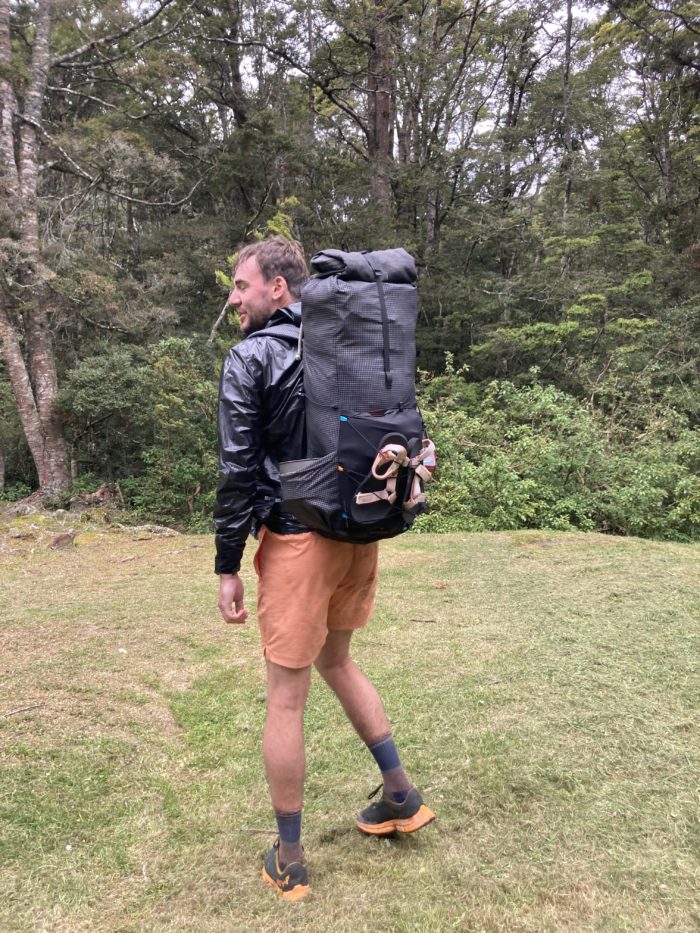 Like the last section, the trail has again highlighted the benefits of hiking as a pair. When my phone broke we had redundancy in being able to switch to Jenny’s phone, now as Jenny’s knees swell with the pain of a hard few days of trailblazing, we can work together as a team to ensure we are safe and enjoying things.

A short hitch later with an amazing South African man we were in the lakeside town of Te Anau where a double zero and some town food will get us trail fit once more.

Hiking on Top of the World – besthike.com

How to Choose the Best Camp Cookware for Your Outdoor Adventure

How to Choose the Best Camp Cookware for Your Outdoor Adventure

6 Things To Remember When Camping Outdoors

Dreaming of White Blazes – The Trek

These Boots Were Made For Walking The Trek Bloggers