A right pain in the knee

Three nights in the standard cabin at Lakeview campsite in Te Anau was initially a bit longer than we had planned to stay in a town whose primary purpose was to be a jumping-off point for coach trips for the elderly holiday-goers of New Zealand. But Jenny’s knee didn’t get much better over the first few days, and Joal had a number of calls to the insurance company to make regarding his broken iPhone—trickier when you are in a time zone 13 hours different. 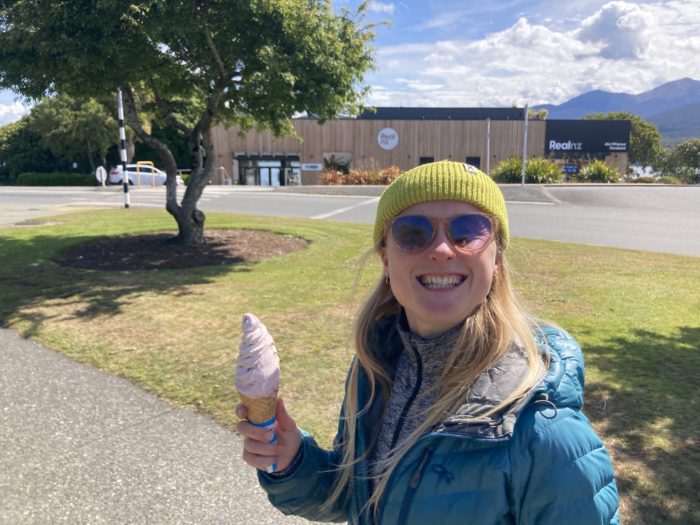 At least we got to sample the delicacies of Te Anau, which included meat pies, real fruit ice cream, along with a great pizza from a shop we later found out from a bemused local was the anti-vax hotspot in town, to which we felt a bit embarrassed we had given them our business. Even the one kilometer (0.6-mile) walk into town was initially tough for Jenny’s knees, with breaks on the park benches next to Shiela and Pam from the coachtrip being a requirement, but after a few days, Jenny felt up for it – on the condition of a light pack.

We redistributed our gear so that Jenny had the two sleeping bags while Joal took the rest, including the food. Jenny’s pack now feels like those display packs at outdoor stores – all puffed up but deceivingly light! An extra day was also added to the itinerary so that we could go a bit slower.

We got our thumbs ready to make our way back down Highway 94 to get going again. Two hitches later, we were wondering how bus services could operate in this country with hitching being quicker, friendlier, and more convenient. Within a few minutes, an Australian couple in a big camper van took us and some fellow hikers the first part, where a local farmer then took us the second half. Speaking to the farmer was interesting as she imparted knowledge of the weather, sandfly avoidance techniques, and knowledge of merino wool. Her farm was one of the first to provide Icebreaker with the wool they use, and within 15 minutes, we knew more wool facts than we had ever known existed!

It was now a short walk to our campsite for the night—Kiwi Burn hut. What was immediately apparent to us both from the moment we hit the trail was just how nice underfoot it was. It was evident a crew had been through, with every downed log cleared, obvious diversions put in where necessary, and a gentle gradient to match. 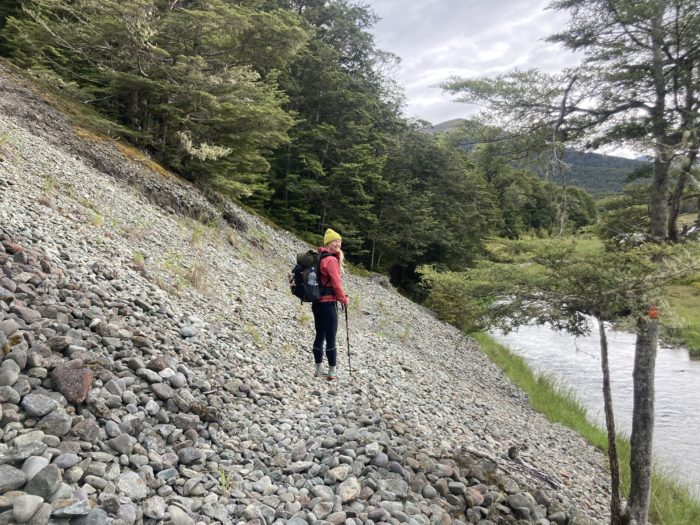 “The trail provides,” exclaimed Jenny, and that it had! Knee-habilitation was in full swing, and the trail was being kind to us to allow this to happen. 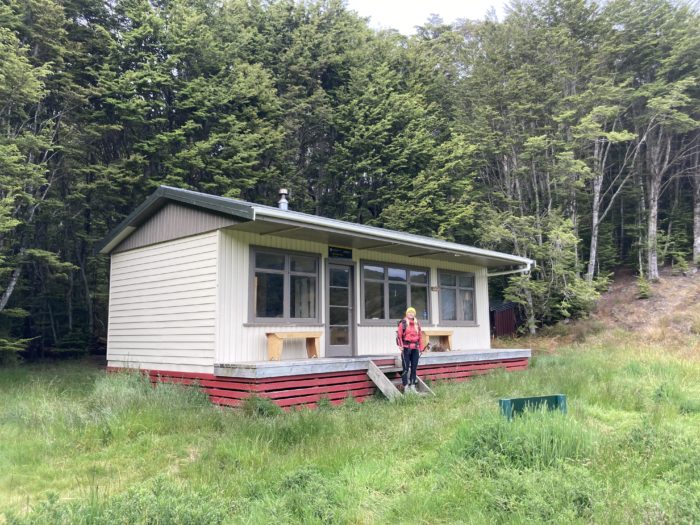 Upon reaching Kiwi Burn, we immediately knew this was the swankiest hut we had stayed in so far on this trail. It had an east and a west sleeping quarter, a lovely kitchen/dining area with a wood fire stove, and a great porch out front. All this made up for the foul-tasting water in the water tank, which we opted not to drink, favoring the stream out back.

An hour later, we heard laughter and chatter coming through the bush. A few moments later, we met our first southbound hikers, two Kiwi natives who were on the home stretch of completing the South Island. While Joal wanted to hear about the trail conditions and highlights ahead, Jenny was transfixed on the female hiker’s knee, heavily taped and strapped. She told us how it had happened (overuse injury), how debilitating it had been for her, forcing her off the trail for weeks at a time, and imparting wisdom about stretches, taping techniques, and treatments. We were reminded that knees are not something to mess with, especially this early in the trail, and we lowered the mileage even further for the next day. Ten miles, an almost empty pack, and a kind trail were hopefully going to sort Jenny out.

A Gift From the Trail 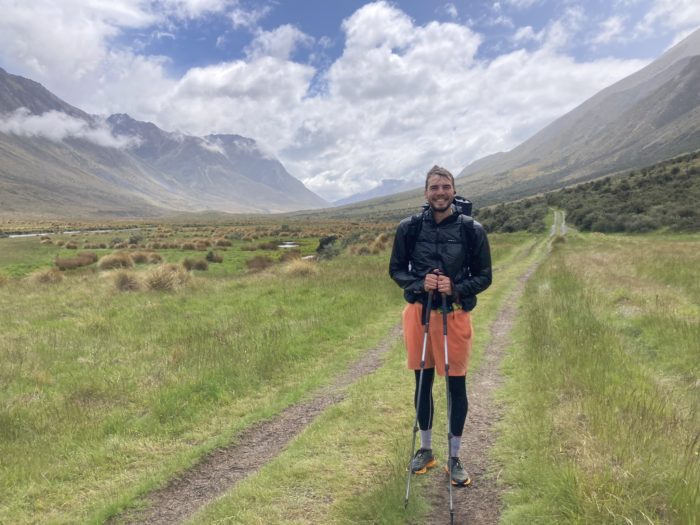 The next day was indeed kind. We hiked slowly through the relatively flat, wide path taking breaks every four kilometers. Pain-wise, Jenny says she feels like she is back to about a 2/10, so hopefully, by the end of this section in Queenstown, we should be back to standard operating procedures. 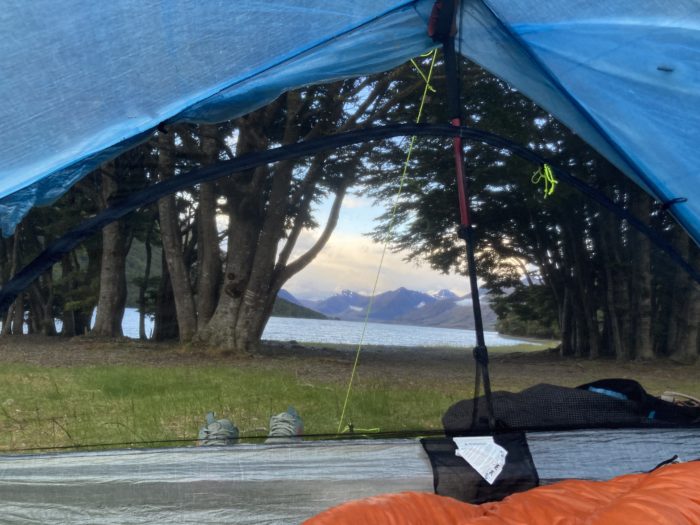 Camping with a sweet view.

The plus side of the lower mileage was that we ended up staying in an epic camp spot at the edge of North Mavora Lake overlooking the snow-capped mountains to the north. Our dinner was delicious—edamame noodle soup with almond butter and rehydrated vegetables—as we sat on the shoreline of the lake. It tasted almost like a Pad Thai, though that might be because anything that has a bit of additional flavor tastes heavenly out here. The trail really does provide! 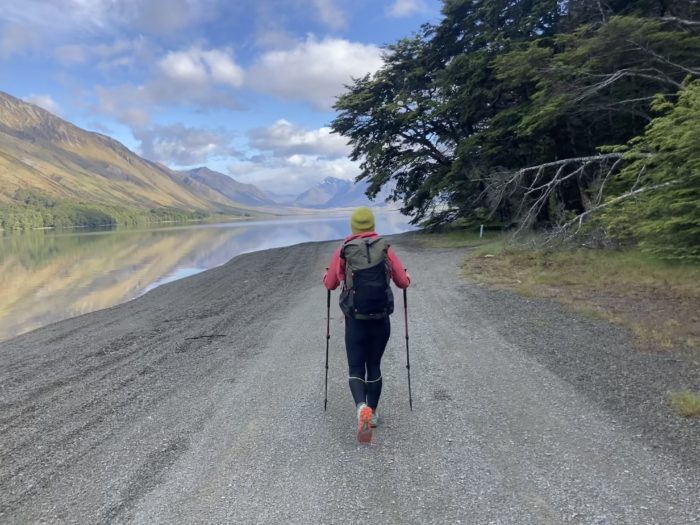 Following the shoreline of North Mavora Lake on a 4×4 track made for an easy 16 kilometers, which were out of the way by lunchtime the next day. A well-timed break at Boundary Hut just as the rain came in allowed for some stretching before an afternoon that chilled and tested us with flooded trail, heavy bog, and downed trees. The 12 kilometers of the afternoon took us over seven hours, with frequent stops for the nobbled knees.

With just under 1.5 kilometers left to go for the day, out in the distance, we saw a hut sitting lonely on the hillside. This gave us the motivation we needed, and a deep river crossing and a wire bridge later, we were saying hello to our bunkmates for the night: the two other hikers we had hitched from Te Anau with a few days back. We had a lovely evening filled with a lot of good stories about Canada, Sweden, and the trails we have hiked or want to hike. 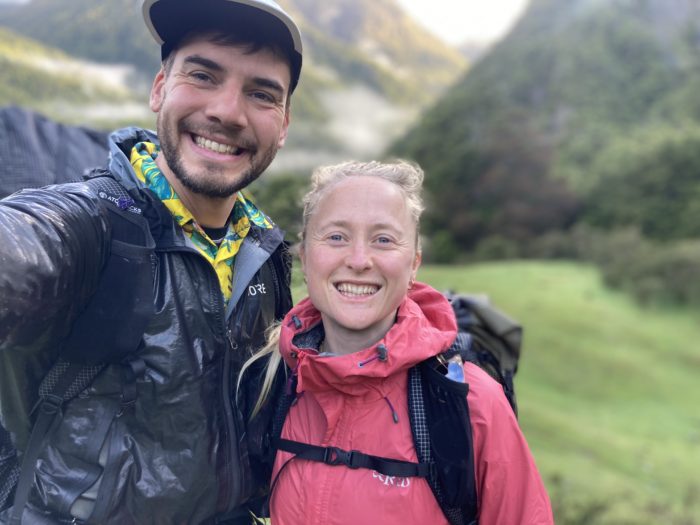 We thought going into this trail that the hike would be a bit more comfortable than our last. Fewer miles and the promise of shelter in the form of huts along the trail helped sell this trip as a honeymoon with some walking rather than a rugged extreme adventure. While the trail is certainly more brutal than the PCT, which in comparison is like walking on a highway, the huts do make up for it in some way. We know that most nights, we will be sheltered, will be able to get dry, and in some cases, even have a fire on.

The huts in New Zealand range from huts that are equivalent to a Scottish bothie, with just four walls and a bunk bed, to “serviced” huts with a warden, flushing toilets, and running water indoors. It’s a “clean up after you go” affair, and most users leave the huts in a better state than when found, although some users seem to have either misplaced items or left things behind on purpose. Jenny found a stylish replacement for her sun hat in one, using the words of a wise man, “Oakleys be Oakleys” as she donned the new apparel. 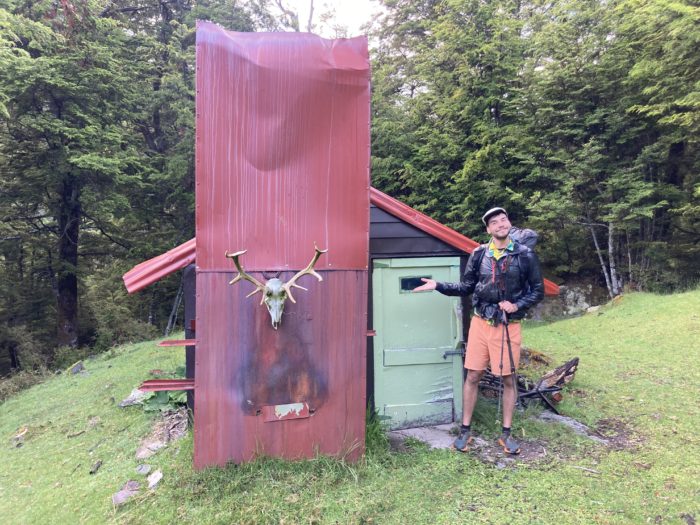 A door fit for a hobbit.

For our final night on trail, we stayed in the Slip Flat Hilton, as had been inscribed by a previous occupant above the door. While basic, and with more bunkmates than we probably realized in the form of mice or other critters, these huts all have a certain charm about them. This one was evidently used by deer hunters, but with a stream to bathe in close by, a large open fire, and the knowledge that it would just be the two of us here, it made for a lovely spot to spend our final evening before the journey to Queenstown the next morning.