My Big Three, and some other extraneous things…

Up until a few years ago, I had never heard the word ultralight or base weight thrown around. Entering the world of r/ultralight on Reddit or the YouTube rabbit hole has opened up a whole new world. Despite having grown up backpacking the Blue Ridge and extending that tradition into my adulthood, the concept of gear was primarily: If it ain’t broke, don’t it. I used my dad’s behemoth of a Marmot down sleeping bag from the 1980s for years until I upgraded to my current sleep system. My hiking boots were my mom’s until the sole fell off in the Jordanian desert (I found sand in every crevice of my bag for weeks after that). My first overnight pack was my dad’s; I used it until I upgraded to my first Osprey (Aura 50) after graduating undergrad.

In the last four years or so, my acquisition of gear has increased in line with my increasing commitment to pursue thru hiking: first with the Tour du Mont Blanc in July 2022, and now the Appalachian Trail. This does not include the trails I have organized, hiked on and suffered on with my hiking club in Uganda: Mountain Slayers Uganda. Some snapshots of my gear list are below. I have not included everything here for the sake of brevity and the likelihood that I switch some gear out before I pull up to Springer Mountain in March.

I purchased the REI Magma 15 (W) (2 pounds, 4 oz) after a first attempt at the Rwenzori Ranges in a friend’s borrowed sleeping bag left me cold. I have since taken this bag on the TMB, up the Rwenzoris (again), Kilimanjaro, Mount Kenya, Mount Elgon, and several backpacking trips in the States. It’s relatively light and still has the warmth that I crave on chilly nights at all altitudes. I’ll be throwing a Sea to Summit Thermolite Reactor liner in my pack for the really cold nights in the Smokies and to use by itself when it’s humid and hot. As a restless sleeper, I’ll use the Nemo Tensor Wide for both its R-Value and sheer comfort.  Still on the hunt for a good (non-inflatable) ultralight pillow, though.

For shelter, I have had a trusty REI Quarter Dome SL2 for a while. It stood up in 70 km winds on; but with the addition of a bear canister, I wanted to go lighter. Browsing r/ULgeartrade gave me my answer. I scored a gently used Tarp Tent Rainbow Li to halve my shelter weight! Woohoo!

Much to the chagrin of the Ursack and bear hang proponents out there, I will be erring on the side of caution and storing my food in a BearVault 450. I grew up with bears in my backyard, munching on the blackberry bushes I would also pick from, and I am keen to both maintain my distance and not jeopardize their well-being at the same time. As a kid, we would meticulously hang our food, and I know that tired and exhausted me would much prefer to simply roll the BV to the edge of my camp. I picked the 450 over the 500 due to the relatively short distance between resupplies on the AT. 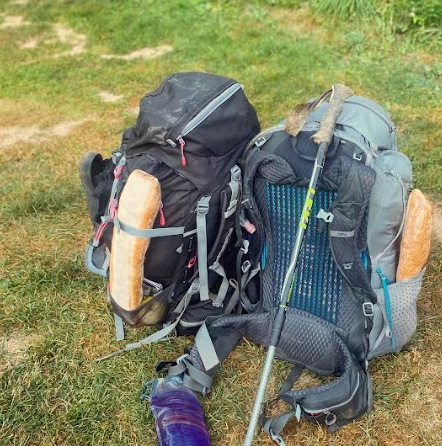 Baguettes are an essential when hiking in the Alps.

My cook system will be relatively simple. The MSR Pocket Rocket is reliable and light (though my dad’s MSR Whisper Light from the 90s is still kicking!) and I’ll pair it with a titanium spork and pot. I’m not much of a chef even off the trail so I will mostly boil water. More importantly, that water will go to coffee, in my collapsible mug.

I remember the days of my dad using the handheld water pump in creeks for us to drink on backpacking trips. I also remember how sore my arm would be after! I have been using the HydroBlu gravity bag for a while now, but with the chance to think more, I have changed up my water storage and filtering. The ease and lightweight Sawyer Squeeze will be my go-to for the AT, alongside the stereotypical SmartWater bottles and an extra Hydrapak storage bag. As always, I will carry AquaTabs as a backup source in emergencies.

Testing out the HydroBlu in West Virginia last spring.

This post does not cover my clothes, shoes, poles, and other bits and bobs. Still, all of my gear will easily fit into my Gregory pack, which is an Octal 55 (W). I was hesitant to go the frameless pack route without a base weight of under ten pounds (4.5 kg). With my base weight at approximately 14 pounds (6.5 kg) I want to travel in comfort. I absolutely love this pack for both the color scheme (turquoise all the way!) and its weight: 2.31 pounds (1.5 kg). It’s nearly half the weight of my original (also turquoise) Osprey pack. My Lighterpack will be updated regularly here. 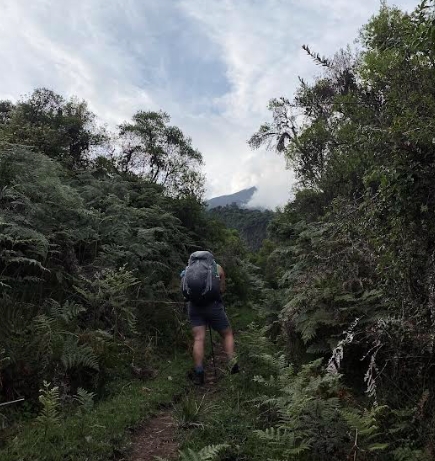 As some people may be able to tell, I write this as a procrastination tool instead of recovering from my latest trek: four days on the fifth-highest mountain in Africa: Mount Meru (4,562 m above sea level, or 14,967 feet)  in Tanzania. Stay tuned for me compiling my AT playlist (it’s going to be epic), my journey back to the States, and the continuous obsession and preparation for the trail.

How to Find a Good Campsite (Tips from Experienced Campers)

Unpacking Fears on the Appalachian Trail