Ever since I was little I could recall playing around in the dirt. Army-crawling my way across the lawn. Making little forts in the grass with my GI Joe action figures and in between merciless imaginary wars – my mind would ease into a sense of stillness. I’d end up sitting and staring out for what felt like an eternity and during that pause I would start to focus on singular sensations. I’d feel the Evening sun gently kissing my face and would hear the wind whistle through the old oak trees above me filtering through every branch. The end of every day would be spent listening to the toll of the church bells that would signal the coming night and ultimately pull me back into the world.

When I wasn’t covering myself in earth, cuts, bruises and god knows what else, I would spend my time inside. Absorbing whatever nature documentaries and television shows about the wonders of the animal kingdom that I could find. I fondly remember the bright and wholesome smile of Steve Irwin as he would explain the purity and fragility of dangerous creatures that he had so fearlessly wrestled. Further into my youth I discovered Les Stroud and his Survivor-man series. I was hooked instantly. His attention/intention to every choice he would make – his unwavering sense of respect and awareness to every moment and possible consequence therein. Every fire successfully created and every step taken. All done with a sense of reverence for Mother Earth.

I, like so many others fell away from this sense of wonder about the world around me.

One day I went inside and just never left. I built a cocoon for myself and fell into a life of frivolous digital anesthesia.

Distancing further and further away from the world with every pixel my young and tired eyes fixated on. The hundreds of hours once spent devoting to those quiet almost melancholic moments that fostered something I can only describe as a sense of love or contentment. A world that was once interwoven with birdsong, evening sun and the smell of fresh earth was now consumed by seemingly endless late nights fixated on attaining the “highest score” and mindless adolescent murmurings. With every moment that I spent investing into my online “life” an overwhelming sense of apathy and numbness grew.

‘In a world possessed by the human mind’

Hours fell into days and months into years. Before I knew it – I was lost in the ritual of feeding into this feckless habit.

My sense of curiosity atrophied and was supplanted with the urge for instant gratification that our present technologies so endlessly drown us in. A veritable Pavlovian hell. So quickly I forgot the wisdom of simply letting things be. Of just being present. Something that we all come into being having in our hearts but so quickly we replace with seemingly imperative short-term goals.

Our desperate attempts to fit into every stricture or standard that our society asks us to adopt. Falling only further away as we attempt to mold ourselves into something else – someone else.

My life has been spent almost exclusively within the borders of Illinois. It’s a land comprised of seemingly endless fields of soy, corn and pumpkin farms. Day-trips to local parks and nature centers as well as jaunts to neighboring states were the bulk of the “wild” adventures during this time. My passion for the natural world built mostly by those nature documentaries and my own misadventures  (often mimicking Irwin or stroud) into the forests behind cul-de-sac’s and “undeveloped” pieces of property in between neighborhoods. What we lacked in mountains and deep valleys – I supplemented with my imagination. Our well-manicured front lawn became a battlefield. The windowsills became cliff faces and the chemically treated retention ponds became impossibly large valleys.

The Few nature parks around felt like an oasis outside of the home I made in my mind. I vividly remember walking the trails with my father and big brother around ‘Little Red School house’ in Willow Springs or Maple Lake.

My first ever significant adventure outside of Illinois was relatively late at the age of 21 (2017 at the time). At that time my best friend was kind enough to let me along for a journey to the most incredible place. One I’ve only ever watched documentaries about.

After spending a week there and galavanting around Deer Mountain, Flat Top Mountain, Bierstadt Lake and my absolute favorite Loch Vale. All those places around my native Illinois felt like gift shop’s (thanks gord) in comparison. These wonderful moments re-lit that fire I was so out of touch with. When we reached the waters edge at The Loch that feeling of wonder and love flooded back.

My best friend and I have been avidly adventuring around a national park every summer since.

During that tumultuous year that Covid fell onto the world I began to reckon with my sense of disconnect – and after endless hours reading about the world on fire – I happened upon an article about the longest hikes in the US. The Pacific Crest Trail was at the top of the list. It described the impossible distance that hikers would be required to traverse -from Californian deserts through alpine forests, mountain ranges and pacific rainforest – forcing you to devote up to 6 months of your life. An odyssey compared to anything I’ve ever experienced.

While locked away and hounded by impetuous thoughts and fears that we were all stricken with at that time – Almost serendipitously during the height of lockdown – the person that I would come to know as the love of my life would enter into the picture. (via Instagram)

She told me of her adventures around the country and to South America. Her voracious love for mountain and mushroom alike as well as music, dance and rock climbing. I was enamored almost immediately. We quickly fell into deep connection with one another and before I knew it – it was 2021 and my friend and I were deciding on the next summer trip. We ultimately chose to go back to the place that inspired us so thoroughly. Back to Rocky.

She would be in Montana at the time. Hiking deep into the backcountry burn zones to search for treasure troves of wild mushroom. Her respective adventure just adjacent to ours.

I asked her if she would like to meet and as luck would have it – she did.

She drove several hundred miles down overnight to rendezvous. Just prior to her arrival my nerves were anything but calm and hours before our initial meeting, my friend, his partner at the time and I had just hiked Flat Top Mountain. The very idea of my first encounter with this young lady only helped expedite our hike.

From the very moment we met at our campsite – I knew that this was the love of my life. Her bright blue eyes glistened in the warm evening sun. Her braided blonde hair draped over her shoulders and flowing gently in the crisp mountain air. She was wearing a worn old tank top with “AR” printed onto it (Representing her native home Arkansas) and black fluted skin tight pants. Her warm grin met my nervous imitation of a smile and we embraced.

Both of us quietly apologizing to one another for the accumulative smell that always accompanies outdoor adventures.

The rest of the evening feels like a blur after our initial meeting. I had my own version of that proverbial “Rocky Mountain high”. The following day we decided on hiking up to the loch together. (My favorite place in the world). My friend and his partner were kind enough to go take on another trail around the park to give us some privacy.

This wonderful young woman and I then set out. We made it to the start of the trail and before I knew it she was wistfully hopping from rock to rock in her trusty pair of vibrams just in front of me. We talked about the beauty of the mountain air and her fascination with the mycological organisms that she incredibly managed to find – seemingly every few paces.

I blinked and we were arriving at waters edge. The Loch just was beautiful as I had remembered. It had been over 4 years since I was there last. I inhaled deeply and stared out – watching the midday sun dance on the ripples of the calm mountain lake. The snow-capped peaks standing in their majesty just beyond. I turned towards her and smiled. She responded in kind. We sat down by the water – she laid her head in my lap – my heart skipping a beat (or several hundred) and we talked about our passions. Our hopes and dreams. The beauty of the world and with every word she said I fell more and more in love with her.

I felt alive. That same connection that I felt during those quiet moments as a child looking out into the evening sky. 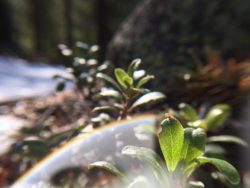 She was able to remind me of what matters most. To love deeply and to hold true to what you intend on doing no matter how difficult the path may be. I realize now that She was my Sherpa.

All too soon..  My fears – The inner-cynic that had developed over the years blinded me from that light and I failed in my responsibilities to that incredible woman and ultimately to myself.

We have since lost that connection to one another as a result and that loss – that impossible pain has only reinforced the gravity of holding true to what matters most to me.

There is no object in this world; no matter how shiny, expensive or sought after. No amount of reputation or social status that will fill your heart full enough to be content.

It all falls away. It all leaves you with yourself.

The Pacific Crest Trail represents a path towards those old lessons that I have convinced myself to forget. To fear and to put off. To doubt.

That 2650 miles. Those 5 million odd steps towards the finish line. Those impossible moments of hesitation and confusion. The arduous and the beautiful. The terrifying and the hilarious. All of those experiences that this trail offers. Known and unknown. I welcome it.

I want to do this for myself – and for You Rae. Per Sempre Vostri 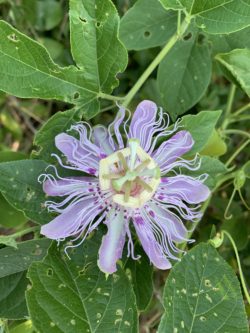 Why Auden’s Col Should Be Your #1 Expedition Trek?

New Hampshire: Whatever it Takes

Hiking the Via Alpina – My experience