There’s a thru hike in the middle of Los Angeles and most people have never even heard of it.

The Backbone Trail (BBT) is an approximately 70-mile-long trail which spans the length of the Santa Monica Mountains National Recreation Area. While the National Park Service (NPS) still considers it to be technically incomplete due to one section where hikers have to take a connector trail, it provides a long-distance hiking opportunity to people within the sprawling metropolitan city.

In February, I will be setting out from Will Rogers State Historic Park and attempting to walk all 70 miles of the Backbone Trail over the course of just five days. This is everything I’ve learned so far about the trail in my prep for a thru hike in the country’s largest urban national park.

Camping on an Incomplete Trail

Even though the BBT is still considered by the NPS to be “incomplete,” that doesn’t mean you can’t thru hike it from east to west terminus. The only reason that the trail is considered incomplete is because of one section where a connector trail is necessary in order to continue the trail. You can still hike the entire length of the BBT though, and I plan to!

The issue that the trail being considered incomplete creates is with camping. The NPS plans to start issuing camping permits once the trail is “complete,” which will allow thru hikers to camp on trail throughout their hike. This will allow hikers to split the trail into smaller sections and do less planning than I’m having to do. Currently, thru hikers are only allowed to camp in designated paid campgrounds that are near the trail, or in places that are off trail (similar to the Oregon Coast Trail, which I’ll be completing in the fall). Some of these off trail areas are going to add a couple miles along my already long days, so I might find myself catching a ride or two to avoid road walks.

Water in the California Mountains

The thing that always stopped me from pursuing this trail in past years was the idea of water sources being hard to find, but with the recent rain in California, I’m definitely less concerned. Luckily, the first two nights on trail will be at paid hiker/biker sites with nearby water at either a ranger station or in the campground itself. Nights three and four will be a little more complicated since those are the nights with no nearby paid campgrounds.

From the few resources I’ve been able to find online of past thru hikers, many people cache water for these sections. Luckily, my family lives within an hour’s drive of the whole trail, so my dad will be bringing me my water caches on these nights (and maybe giving me a ride to camp). This will prevent any situations where people may take my water before I arrive, which is a small concern of mine for this trail specifically, where I’ll be criss-crossing a city. 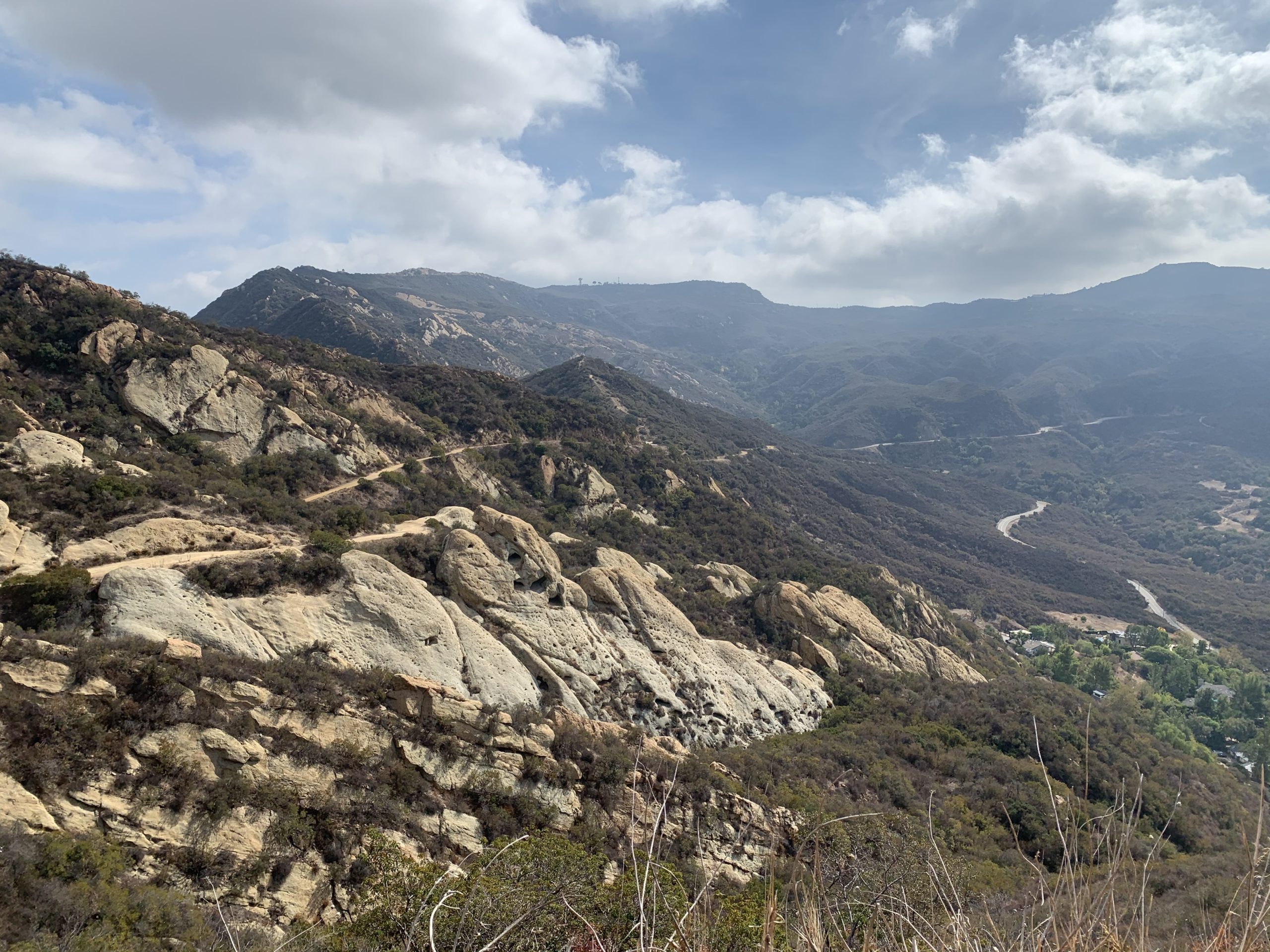 Because of the inaccessibility of camping along the BBT, I’m going to have to hike longer days than I’d necessarily like to (at least for my first ever thru hike). My first day will be a short 10.5 miles to the only on-trail campground of the hike, but every day after that will be between 14 and 16 miles. In the summer, I wouldn’t be as concerned about this (and would maybe even attempt days closer to 20 miles), but in the winter, I’ll have less daylight, and since I’ll be hiking so close to a city, I don’t want to have to hike at night for safety reasons. Not to mention larger wildlife in the area like coyotes and mountain lions tend to be more active in the evenings and early mornings, so getting to camp earlier than later is going to be ideal.

How does the City Affect the Trail?

The Santa Monica Mountains National Recreation Area (NPS), is known to be the country’s largest urban national park, running through Los Angeles itself. I grew up hiking in these very mountains, exploring their unique Mediterranean landscape, and watching it change over the years. Growing up right at the base of the mountains allowed me to grow and foster a love for the outdoors from a young age, and made it so we only had to drive 30 minutes when my dad took me on my first camping trip 20 years ago. 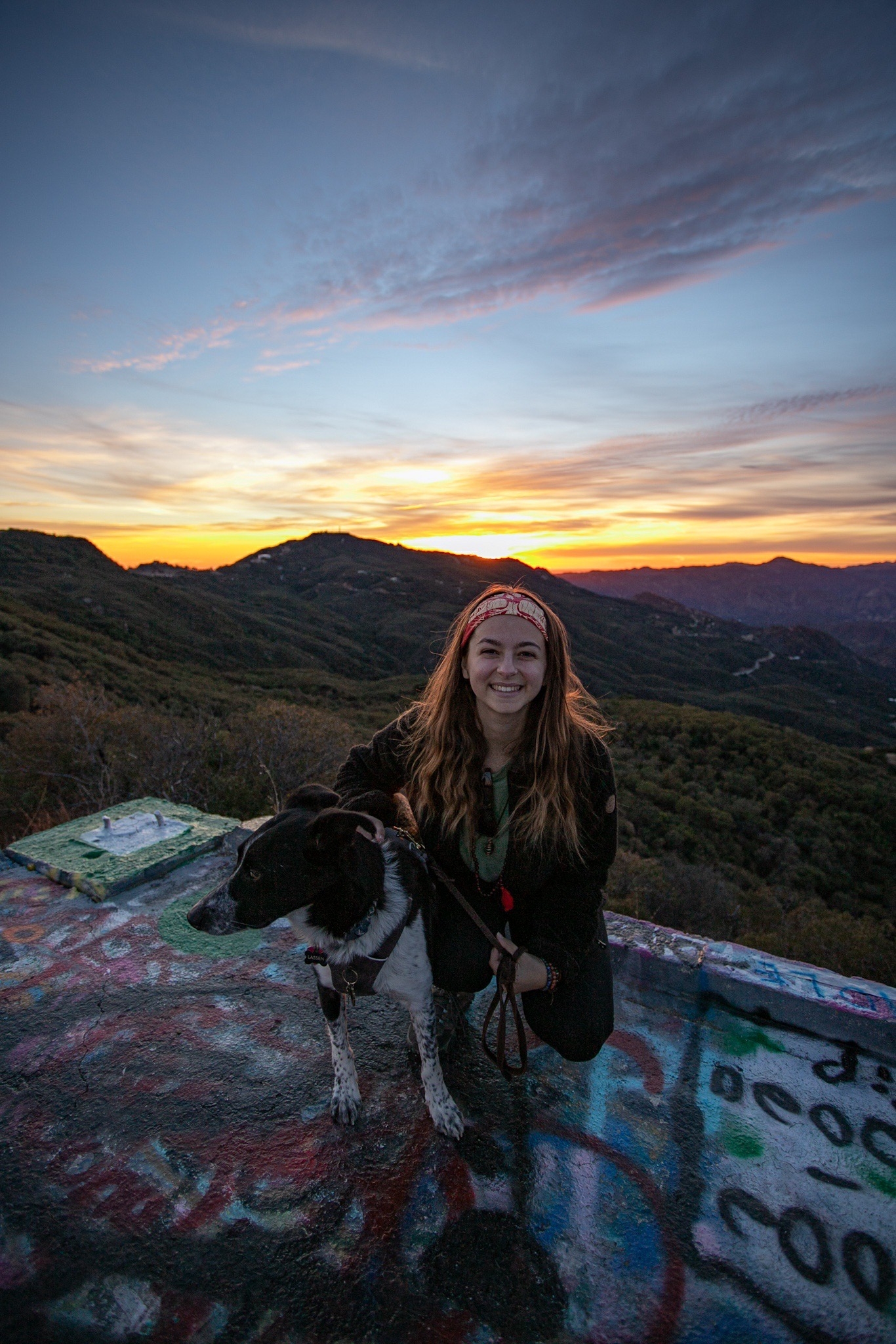 While having a long distance trail like the BBT super close to most of Los Angeles can make outdoor recreation accessible, there is a downside to having a park in such close proximity. When I was younger, many parts of the Santa Monica Mountains still remained largely untouched and unaffected by the city, but over the years, our impact has started to show.

Places that once grew wildflowers in the spring have recently been torn up by dirt bikes and off trail hikers. Rocks along the trails are covered in graffiti. Trash lines the bottoms of trees. And predatory wildlife has started to wander more and more into neighborhoods in search of food due to the destruction of their natural home.

My goal in hiking the BBT is to start a conversation about this and show people who recreate in these mountains (and any mountains for that matter) how to recreate without leaving a lasting impact on the land. In fact, there are ways that recreating on it can even improve the mountains.

Recreation teaches people to love the place. It provides a connection to the wilderness (even if it’s an urban one). It teaches people about their local nature, or about places that are vastly different from where they come from. The challenges along the BBT are opportunities for me to show people that it’s possible to recreate responsibly even in a more complicated environment. The goal is a conversation–about over tourism, about our effects on the mountains, and about how we can change the game, and save them.

How to Layer for Cold Weather

Do You Need a Camping Car Heater? How to Stay Warm on Long Trips

Maine, Part 1: See You up Trail

The Ultimate Guide to Cowboy Camping